The Unexpected Benefits of Blogging

I hope everyone who celebrates Thanksgiving here in the United States had a great holiday. Ours was spent feeling ill, but we had all of our kids here,and that's the most important thing.
One of the great things about doing a blog like this is that sometimes you get the chance to do a good deed and unite people with something they've been looking for. You may have read my post on the lady who found a replacement for her favourite childhood doll here on the blog. 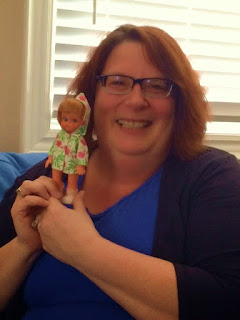 (If not, you can read her story HERE.)
Recently comments were left on my post on Ivy Cottage dolls Ruby Buttons and Violet Pickles by a couple of people wanting to buy Ruby and Violet dolls, and someone who had a pair of the dolls to sell. 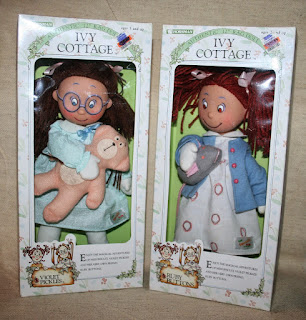 I was able to get them all together, and if any of them are reading this, I'd love to know how things worked out.
Once in a while I get offers of dolls too.Usually somebody offers me more of what I already have. I got lucky a few weeks ago though. A guy who read my post on Beatles dolls and figures in which I mentioned wishing that instead of having just a couple of the Beatles cartoon figures, I had the whole set. He messaged to say that he had the boxed set.He was looking to downsize and get rid of a few things. It had been a gift, and he wasn't concerned about making big money on it. He just wanted to pass it along to someone who would appreciate it. 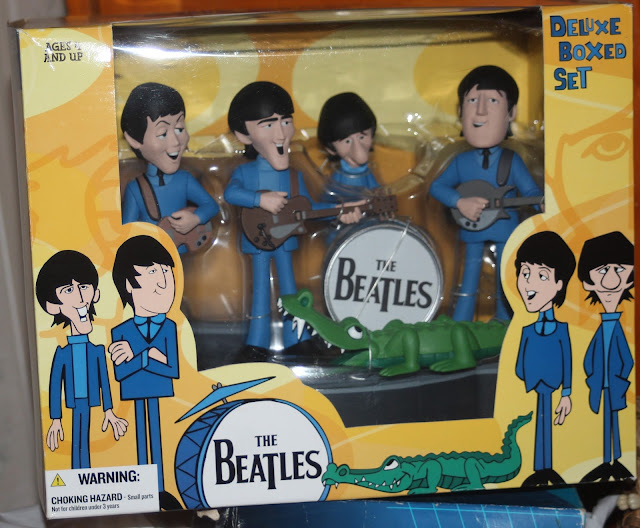 Well I appreciated it! The whole set! Up till now all I had were Ringo, found in a clearance aisle, and Paul, found at a yard sale.
My husband, Ken, has always complained that I am too trusting. I was about to  offer to send the Beatles guy a check when I heard Ken in my head saying, 'This guy might be pulling a con and not even have the set.' I was worried about offending Mr. Beatles, but I asked him for a picture of the set  with a certain specific addition to make sure it was his picture and not one stolen from the internet. Luckily he completely understood and wasn't offended. He sent the picture, and also suggested that he would trust me, so I didn't have to trust him. He would send the set and I didn't have to pay him until it arrived. That had to be sincere! The set arrived, as  perfect as could be. 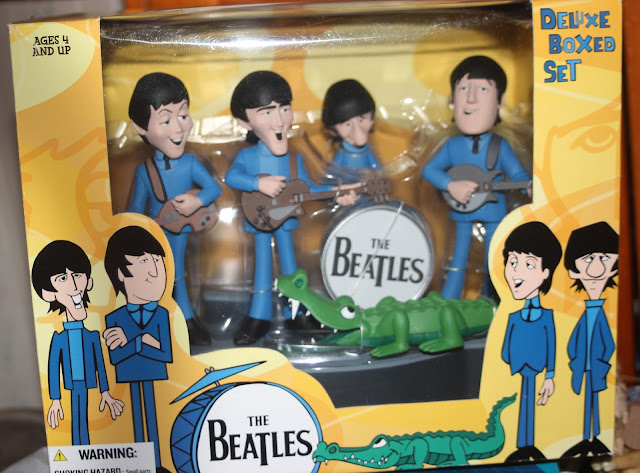 He had actually not even asked for enough shipping! It was packed with bubble wrap and four super soft plush border collies. The dogs were advertising items from the place he works. Coincidentally, Ken collects advertising items, my friend Lori loves dogs, and Fuzzy's girlfriend Shanna loves soft floppy plush toys. So the doggies have found homes already. I immediately sent a check for just over the amount he asked for, to cover that extra few cents shipping plus a few cents. It all turned out really well for both of us!
Posted by Tam at 5:01 PM 4 comments: Links to this post

Inspired by Vanessa's post about the sale on doll sized sweater ornaments from Christopher &  Banks, I actually went to a Christopher & Banks the other day to check them out.I was hoping to save myself the postage of ordering them online. Of course it had to be the next to last store at the far end of the mall, and upstairs too. Of course, it's not like I don't need the exercise.
I was surprised that the display of them was so small: just one tiny little display tree on a table. I was very pleased with the quality though. Most doll sized sweater ornaments are rather stiff, with arms that stick straight out when they aren't on a doll, and bunch up in stiffish folds when they are. These sweaters were super soft and the arms actually hung down like sweater arms should. The weave wasn't so out of proportion, like most are, either. Most of the 5 styles were properly proportionate in the body as well. The blue sweater with the penguins and,one of my favourites, the aqua sweater with the cardinals, seemed a little short and stubby.

Surprisingly, I think my very favourite was the pink  sweater with the striped sleeves. 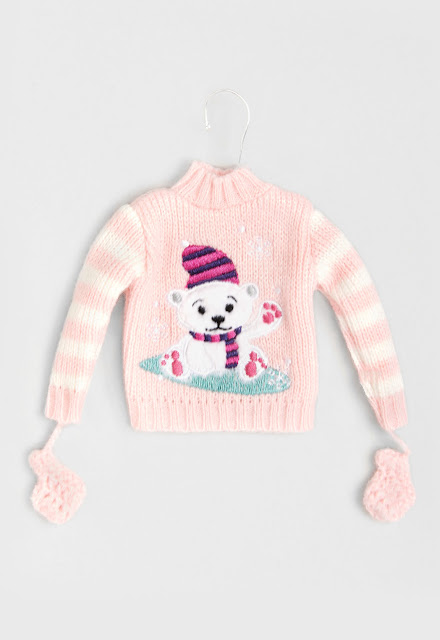 It just looked so much like a real sweater. The proportions were perfect, and it was super soft.

To my surprise, the sweaters were NOT on sale. Not in the store, at least.So much for getting them at the store and saving myself the shipping.  But in the store the sweaters cost $7.95. Online they are still on sale for 2 for $6, plus shipping. With shipping they are still cheaper,but not cheap enough for me. With such a tiny display they will probably sell out before they get marked down,so I most likely will not be getting any. But if you're interested, you can see the sweaters and buy them on sale HERE at Christopher & Banks.
But, if you're as cheap as I am, you might want to check out Walgreen's. I stopped in there the other night to make sure I wasn't missing any cool ornaments, like the Beatles lunchbox ornament I missed last year. No lunchboxes or Beatles of any kind, but I did find what seemed to be the last one of these.

Unlike the Christopher & Banks sweaters,this one is like I described earlier: stiffer, with arms that stick out. It has a smaller weave than a lot of sweater ornaments though, so it's quite soft and looks proportional.

It's also more the size for a Ken than a Barbie.

And you want to know the other really good part? It cost $1.99! You can also turn it around if you'd rather not have the year displayed. That's handy for next year. 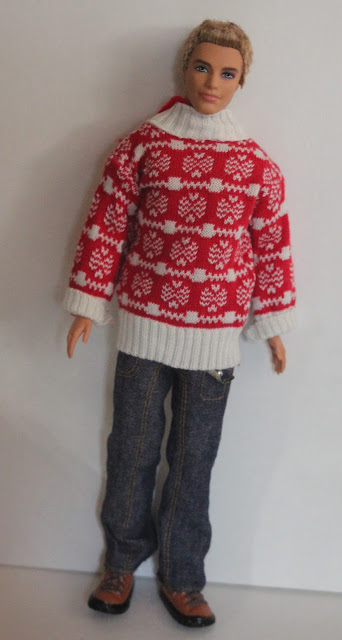 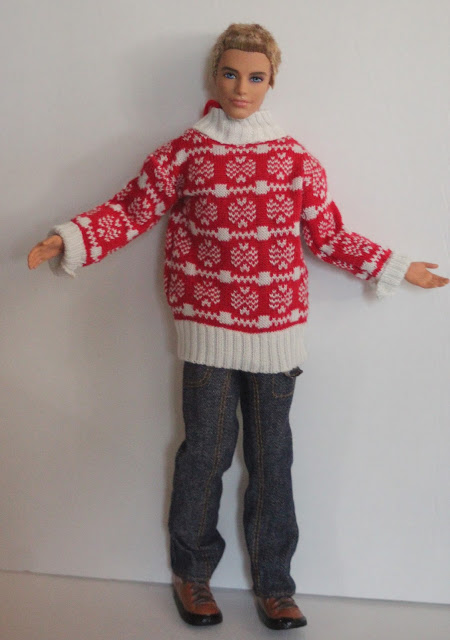 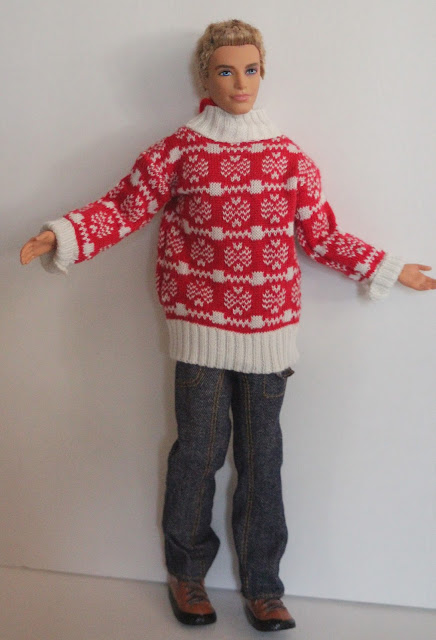 It was a pain getting it on him though. His fingers, thumbs, and even his elbow joints keep getting caught  on the threads inside the sweater. In the end I resorted to wrapping his arms in some plastic off a roll of wrapping paper I had close by.


I highly recommend wrapping the arms in plastic first. It avoids a lot of frustration!
The yarn loop to hang the ornament by is easily removed. I just clipped it and it pulled out. It's not woven in,just sewn through the sweater. It pulls out like a loose thread.

Walgreen's  also had these Nightmare Before Christmas Tsum Tsum's on sale at 90% off! 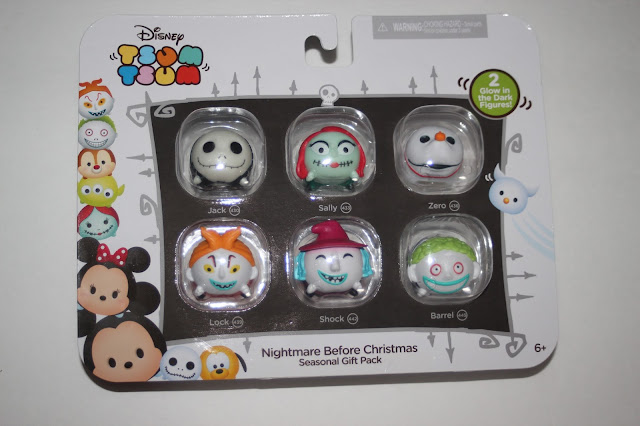 They're a Christmas gift pack and a Walgreen's exclusive.Jack and Zero even glow in the dark! They are $16.99 at full price! Why are they 90% off?  They had a bunch of Nightmare stuff, like Santa hats, stockings, etc., and most of it was on sale, but not 90% off!
For Star Wars enthusiasts there was a great BB8 filled candy dispenser that is perfect for 1/6 scale.It looked pretty realistic too. Sorry I didn't take a picture of it. If you have a 12" doll from the Force Awakens, the BB8 candy dispenser would look great with it. (Just don't look at the back of it. That's where the dispenser hole is.)
I have several posts coming up soon. Stay tuned!
Posted by Tam at 9:11 PM 2 comments: Links to this post