More Birthday Goodies, and Less of My Nose Stitches

Well, I'm sure you've heard way too much about my nose for the last couple of days. Today we're going to take a step back in time to look at what I got on my second birthday treat trip to the Big City the week before last.
We had to take a short trip on my actual birthday because we had to get back for Ivy to get to bed for school the next day. So last week we went back for me to get a chance to go to some of the places I didn't get to go to the first time. I brought home a lot of goodies, some of which we'll take a closer look at in the upcoming week. Here's most of the haul: 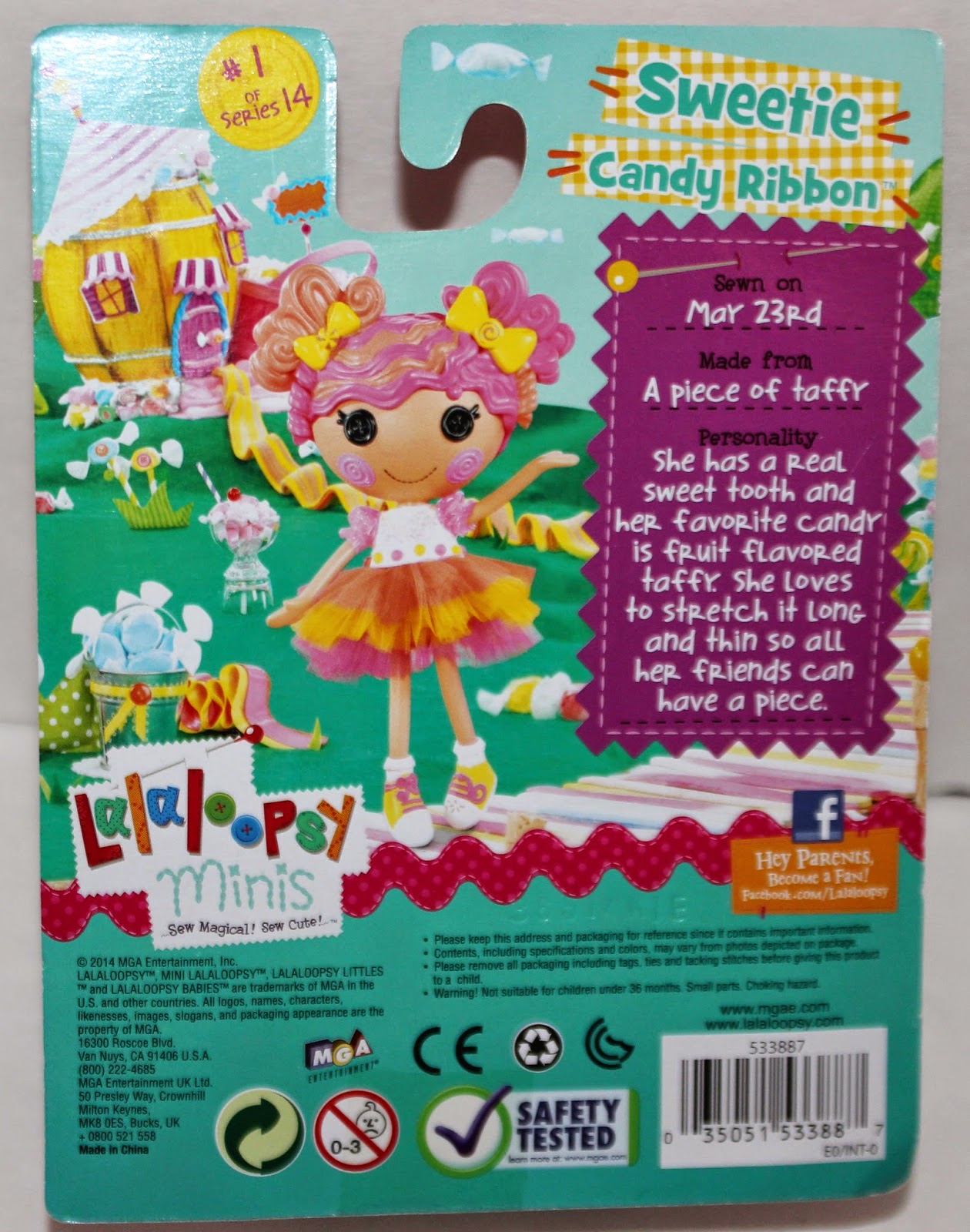 It was the first time I had seen the Madam Alexander Travel Friends dolls. If I had an unlimited budget I could have bought several, but the India doll was my favourite.

I forgot to put these in the big picture: 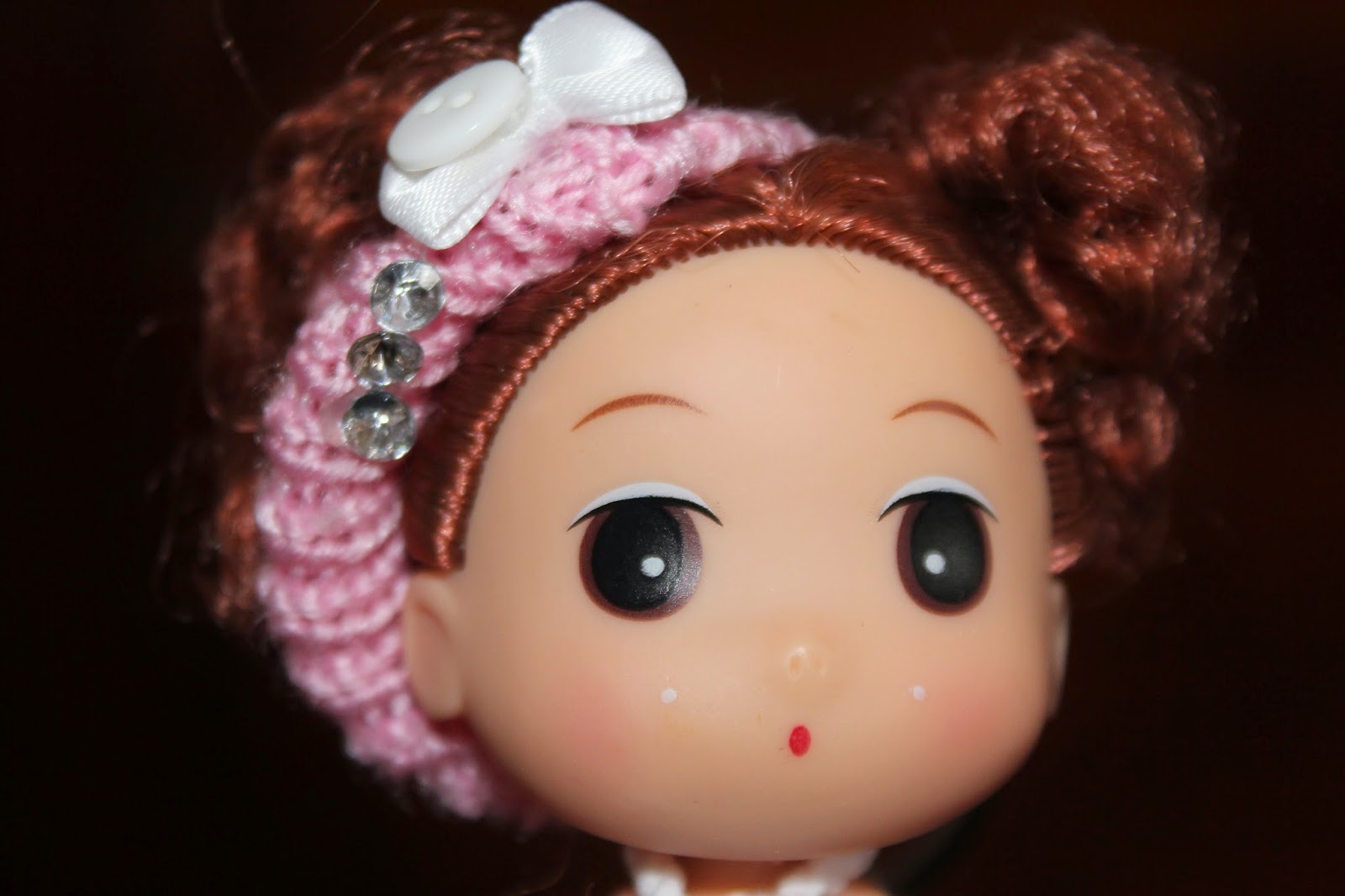 And I also got these at Dollar Tree.


The shades glow in the dark,and they actually glow REALLY bright straight from the store, without even being 'charged'. 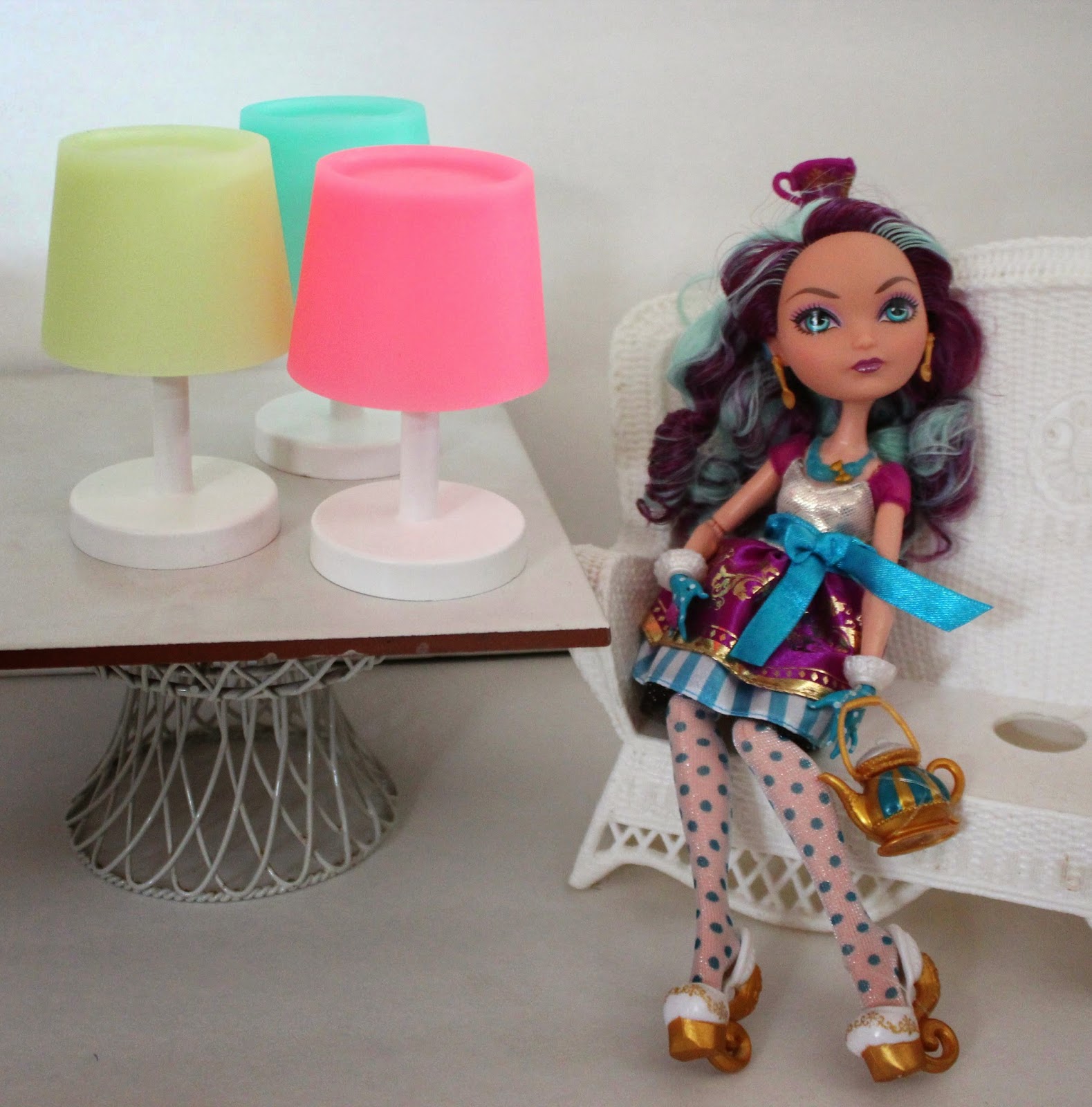 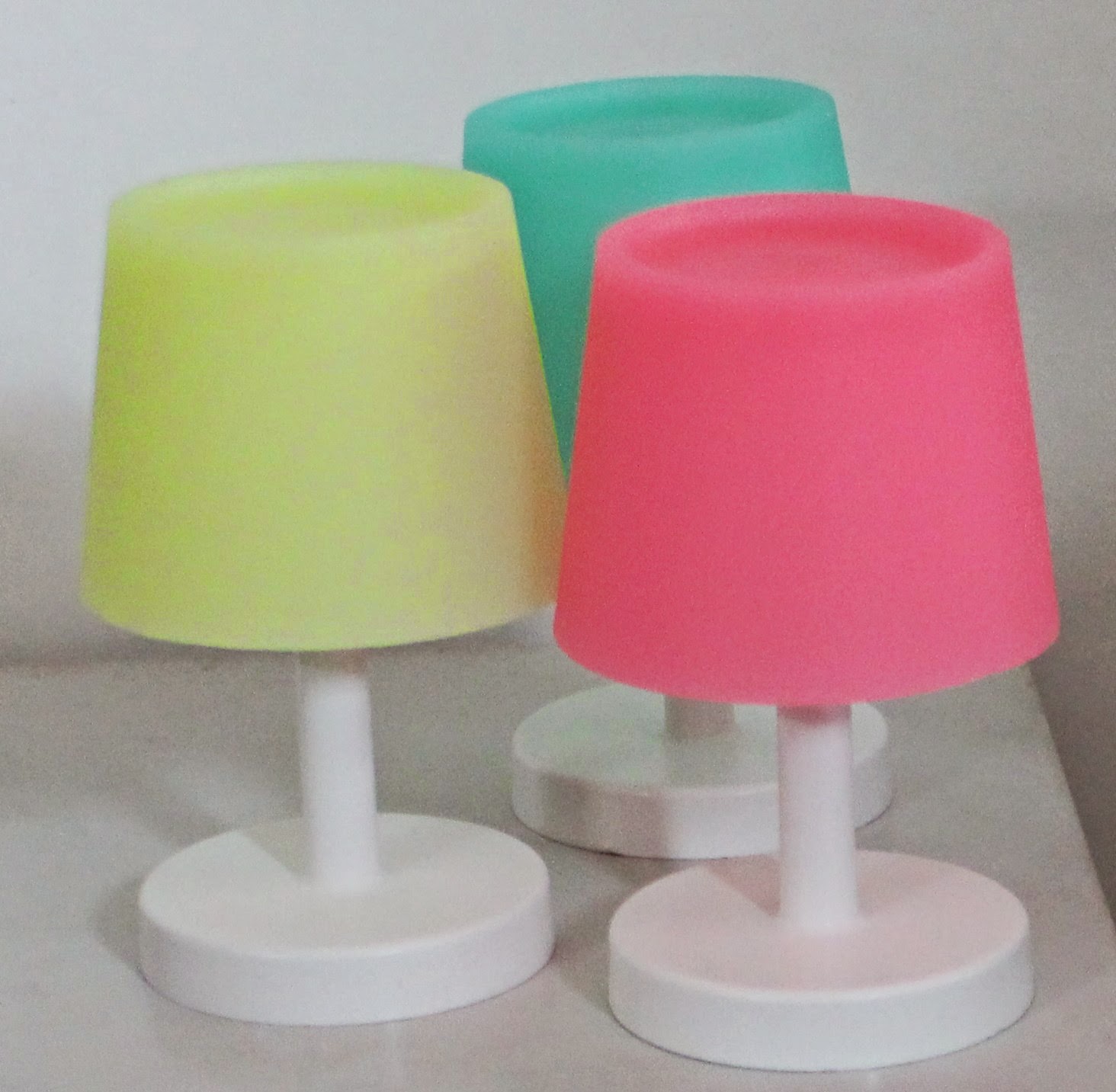 In case you aren't familiar with Dollar Tree, everything there is actually a dollar, unlike a lot of stores that call themselves 'Dollar' this or that.
We'll have an in depth look at Our Generation mini Kendra and the Madame Alexander Travel Friends doll  from India in a couple of reviews later in the coming week.
Posted by Tam at 10:55 PM No comments: Links to this post

The State of My Nose

If you read the blog the other day you'll know I was found to have a basal cell carcinoma on the side of my nose recently. Friday I went in to have a cyst removed, but suggested they deal with the cancer first. The doctor thought he might already have gotten the whole thing when he did a 'shaving'  at the beginning of the week. He said that we could leave it at that and keep an eye on it in case it came back, or, just in case, he could remove the surrounding area to make sure he had gotten all of it. I asked if there was a chance it could come back under the surface of the skin and we wouldn't see it. He said it might, so I told him to 'cut my nose off'.  I ended up with 5 stitches inside, and about 20 stitches outside, in what he referred to as a 'running baseball stitch'. (I said, "That's funny, because I was feeling like laying my head in a baseball mitt and I didn't know why.") It goes most of the length of the side of my nose. It hurt like crazy yesterday, but it's not too bad today. I still can't blow my nose though! My eye was pretty puffy this morning, but I think it has gone down a lot now.

Now that that's taken care of, I received a letter from my other doctor's office today, telling me that my routine blood tests showed an abnormal thyroid. As "Rosanne Rosannadanna" used to say, "It's always something!"

Not So Good News

I went to the doctor recently to see about having a cyst removed from the top of my head. While I was there I also had the doctor look at a small bump that appeared on the side of my nose a while back. A simple act like scratching my face caused it to bleed, and that's not normal, so I was concerned. He shaved it off and sent it for a biopsy. Turns out I was right to be worried. The doctor's office called today to say that the bump turned out to be a basal cell carcinoma. In other words, it was cancerous. The good news is, basal cell carcinomas 'almost never spread to other parts of the body and become life threatening'. I have an appointment tomorrow to have the original head lump removed, and an appointment for April 8th to have the basal cell thingy removed. I'm going to ask if they can switch the dates though, so I can get rid of this thing and feel safer, and know I'm ok. Also, they already cut a chunk out of the side of my nose, so it only makes sense to do it now before this heals, so it will only be one healing and scar less. They said both would take about a half an hour, so it's not like they need more time than they already had set aside for me.
Basal cell carcinoma is caused by sun exposure. Since the kids aren't little anymore I don't have to spend time outside with them as they play. (These days we can't even get Ivy to leave the house!) I really only go out in the sun to hang laundry, yard sale on summer weekends, and go to the flea market with Lori 3 or 4 times a year. I don't normally get sunburned, and have had few sun burns in my life. I am fair skinned, being a red head, but I've never had a problem with burning. In fact, I tan if I'm not careful. I'm going to have to make sure I start wearing sunscreen all the time and start wearing my hat on a more regular basis. (I did start wearing one to hang laundry, but I have been bad about doing it all the time.)
I should be ok. I may have a big scar on my face, but with this face that isn't much of a loss anyway!

Wow! Now that's a title and a half!
I have birthday dolls to review, but while I'm working on that, here's a review that I've had in draft for a while. I finished it off today.
I love the Disney Store's Animator's Collection dolls. (Recently you may have seen my thrift store Merida rescue. ) I bought myself this Frozen Kristoff doll a while back and I finally deboxed him a few weeks ago. 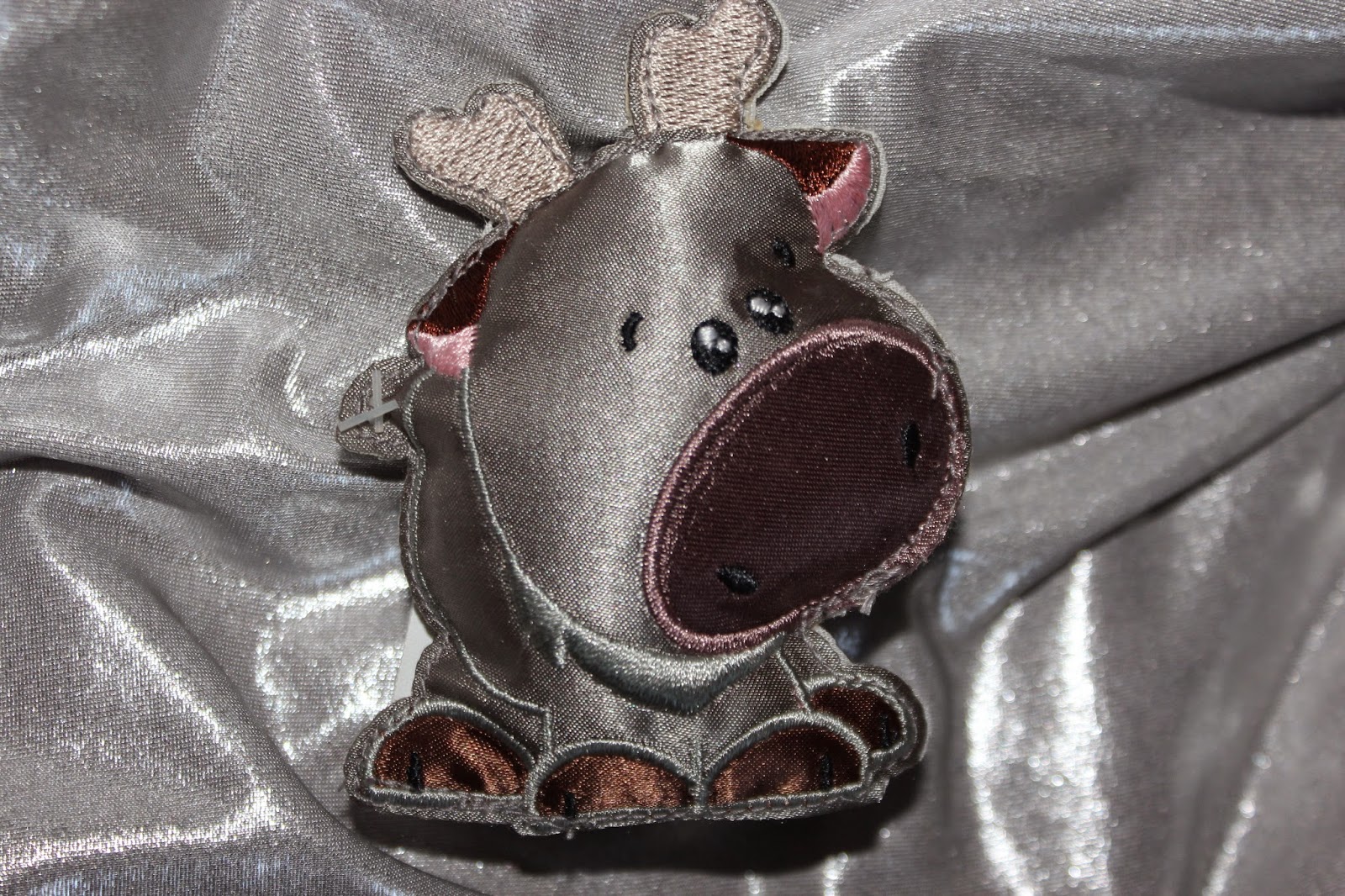 Kristoff is such a cute little guy, and I may be wrong, but I think he's the only boy in the Animator's Collection line. Anybody?

The box was sealed with the usual tape circles on all three open sides of the lid. 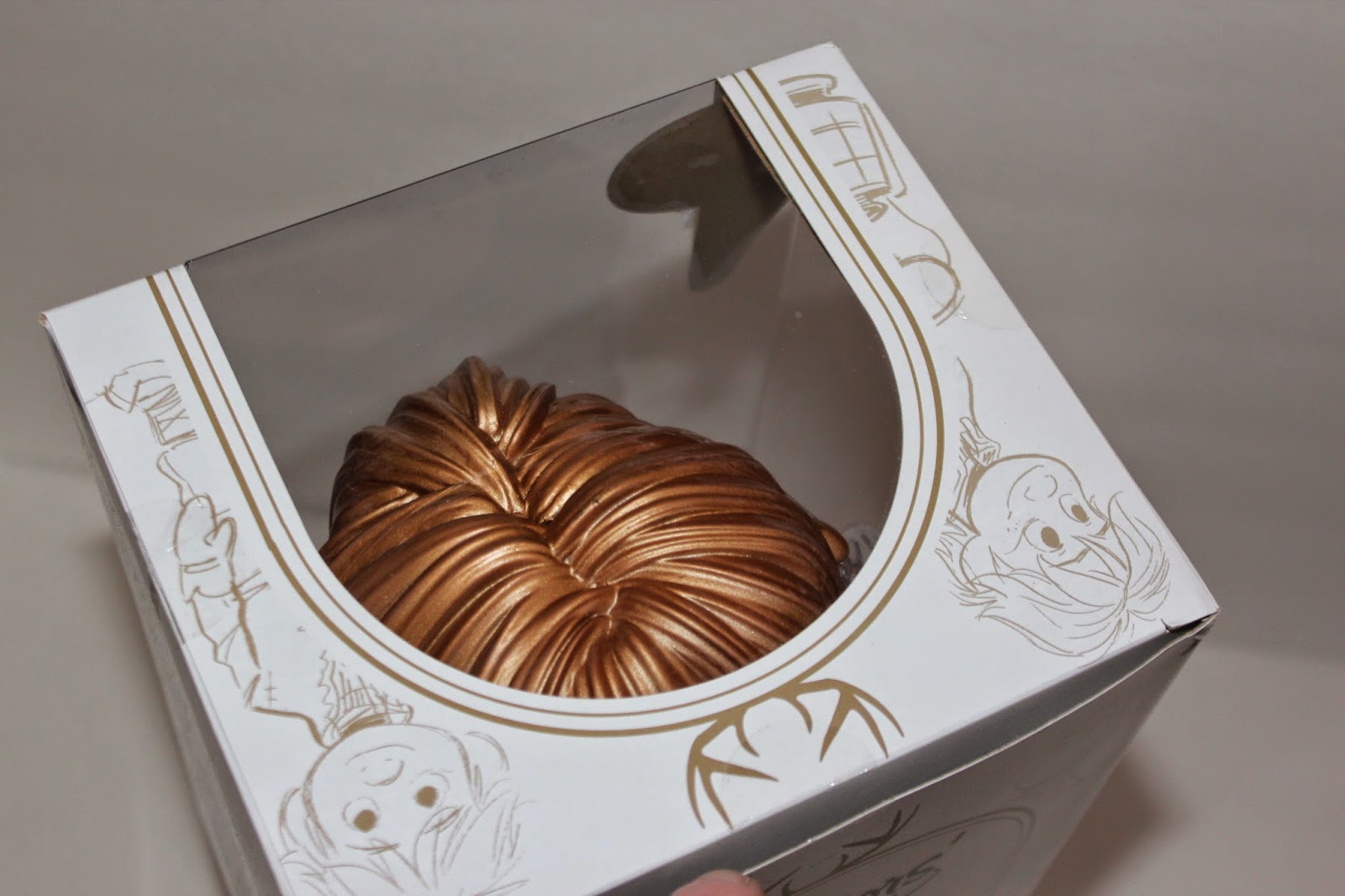 The inner tray part slid out... 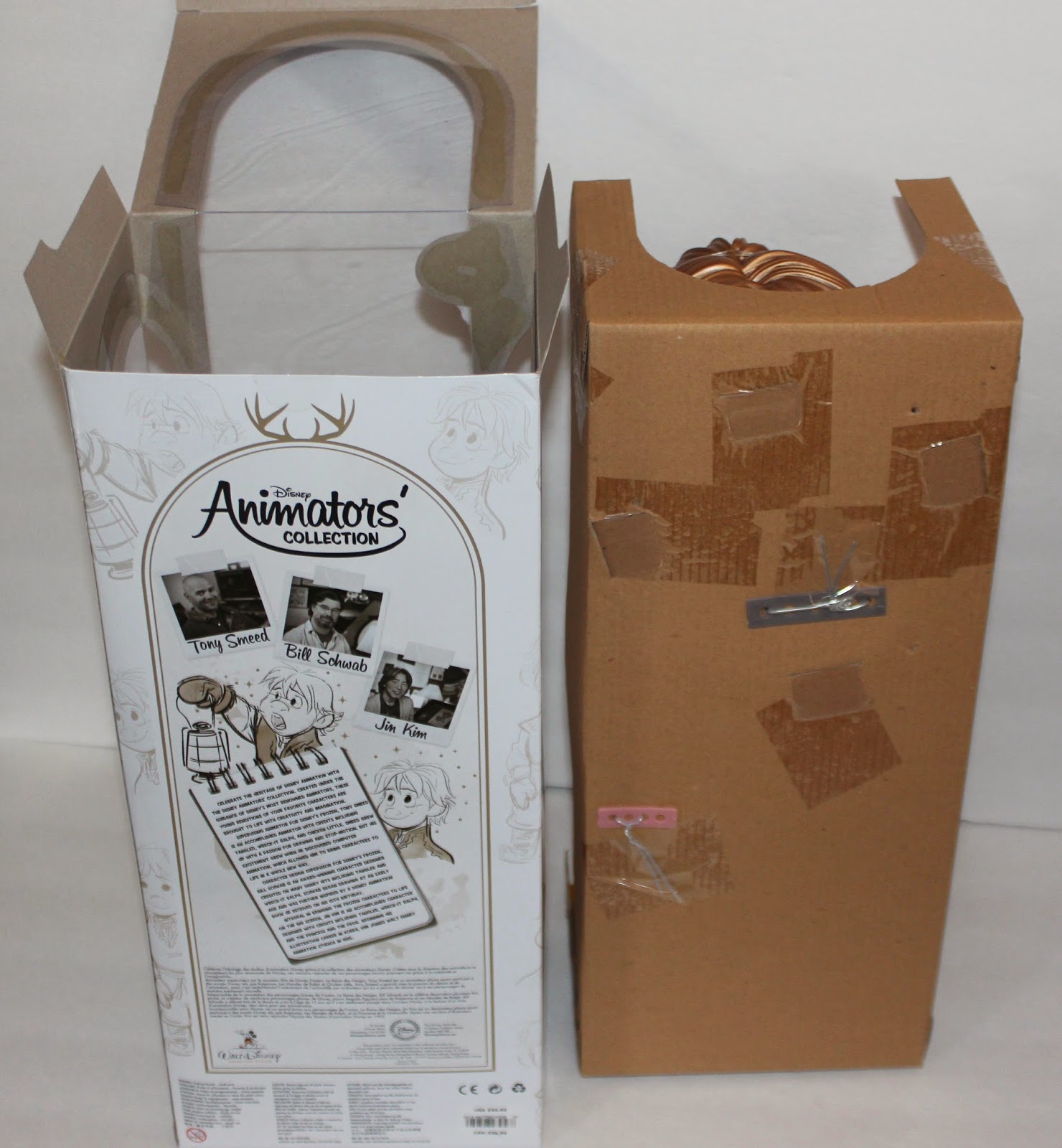 ...and Kristoff was held in by the usual conglomerate of twist ties and tape. 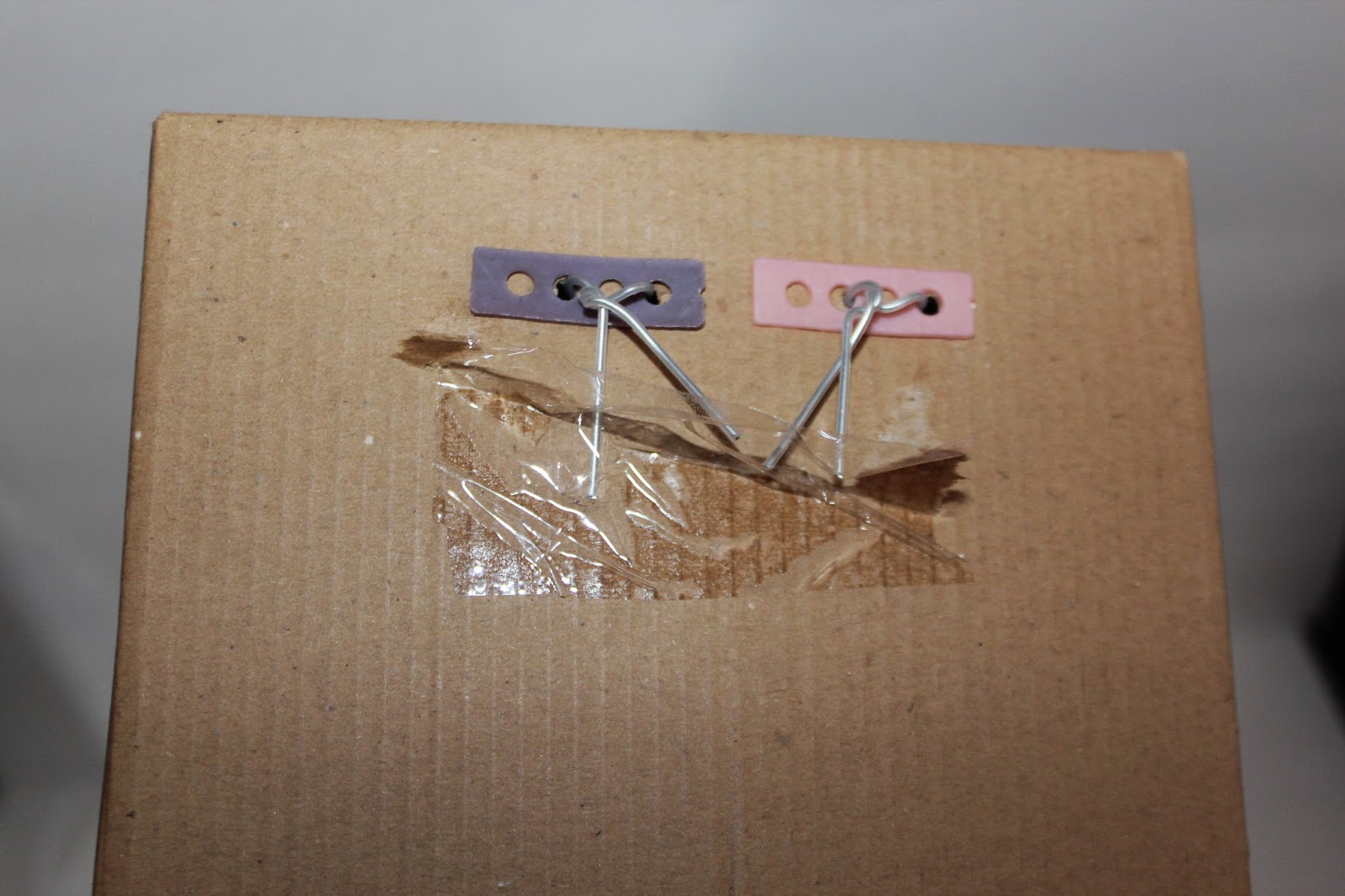 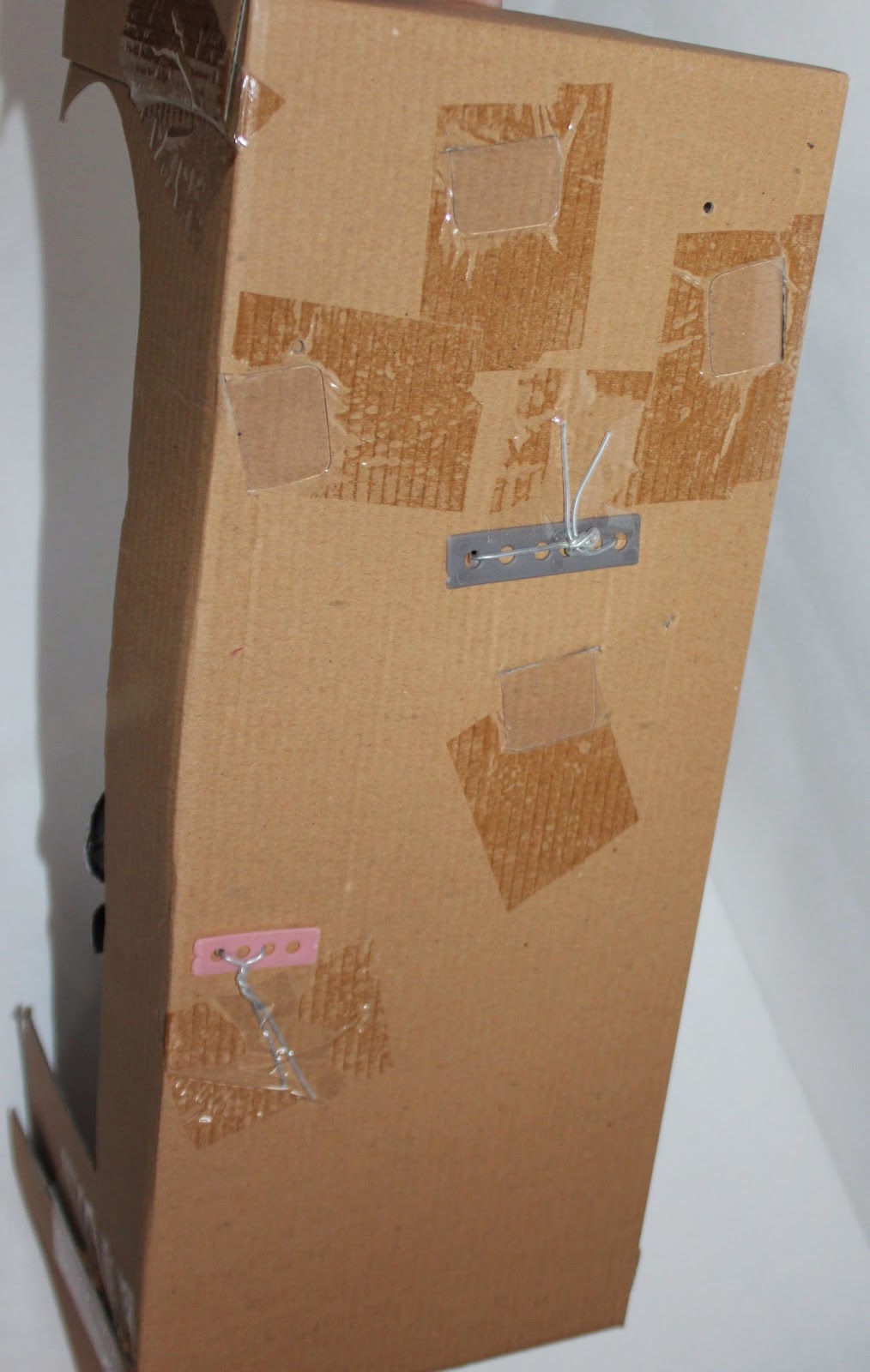 After they were removed Kristoff was free from the tray, if not the giant plastic shell on the back of his head. 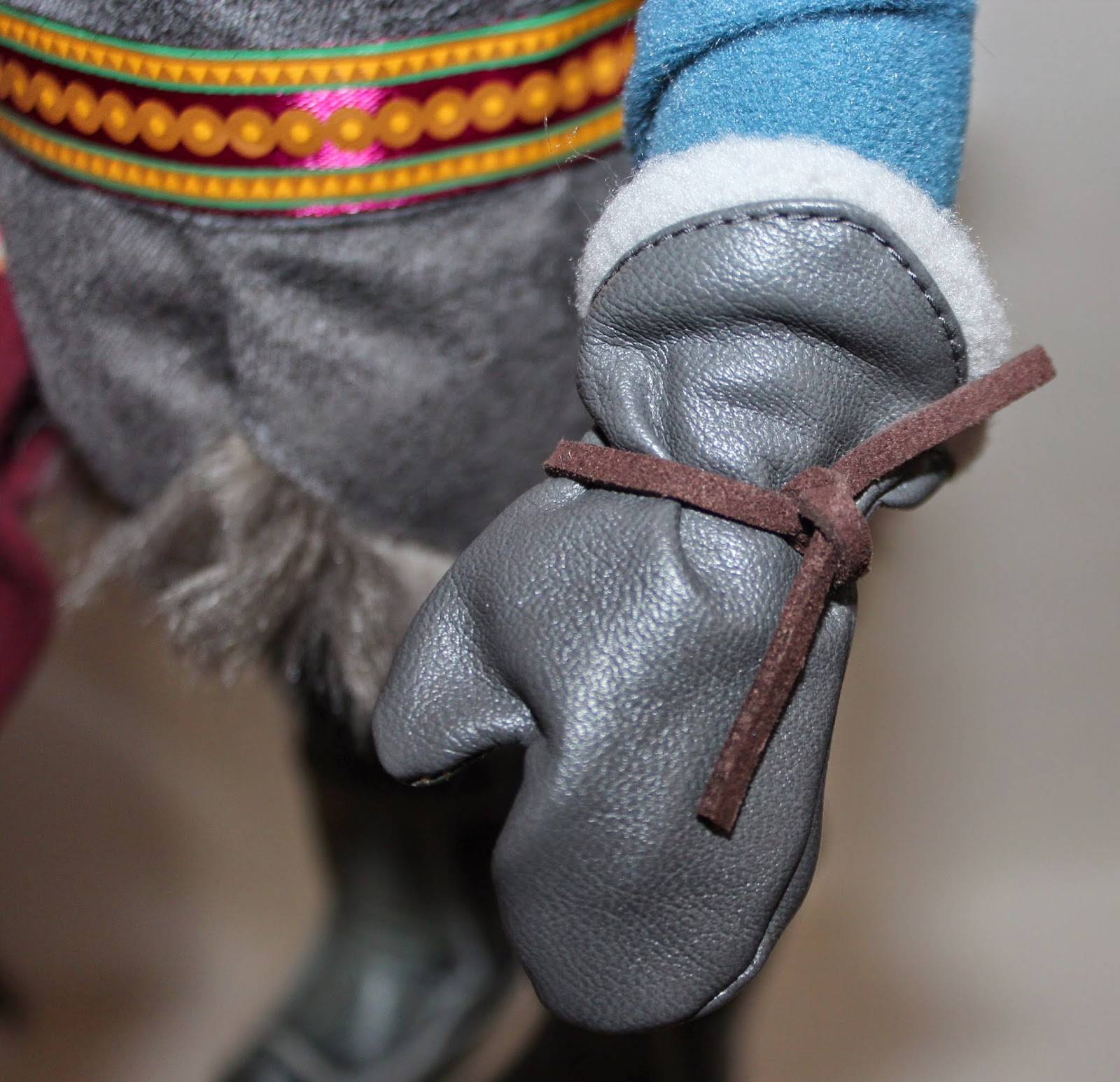 His gloves slip on, and tie. The string is sewn to the gloves so it can't get lost. I've heard these gloves are REALLY hard to get on and off, so even though eventually I would like to redress him as an everyday little boy, for right now he's not taking off his gloves!
He has tons of freckles, but they're not over done, and his cheeks are blushy. 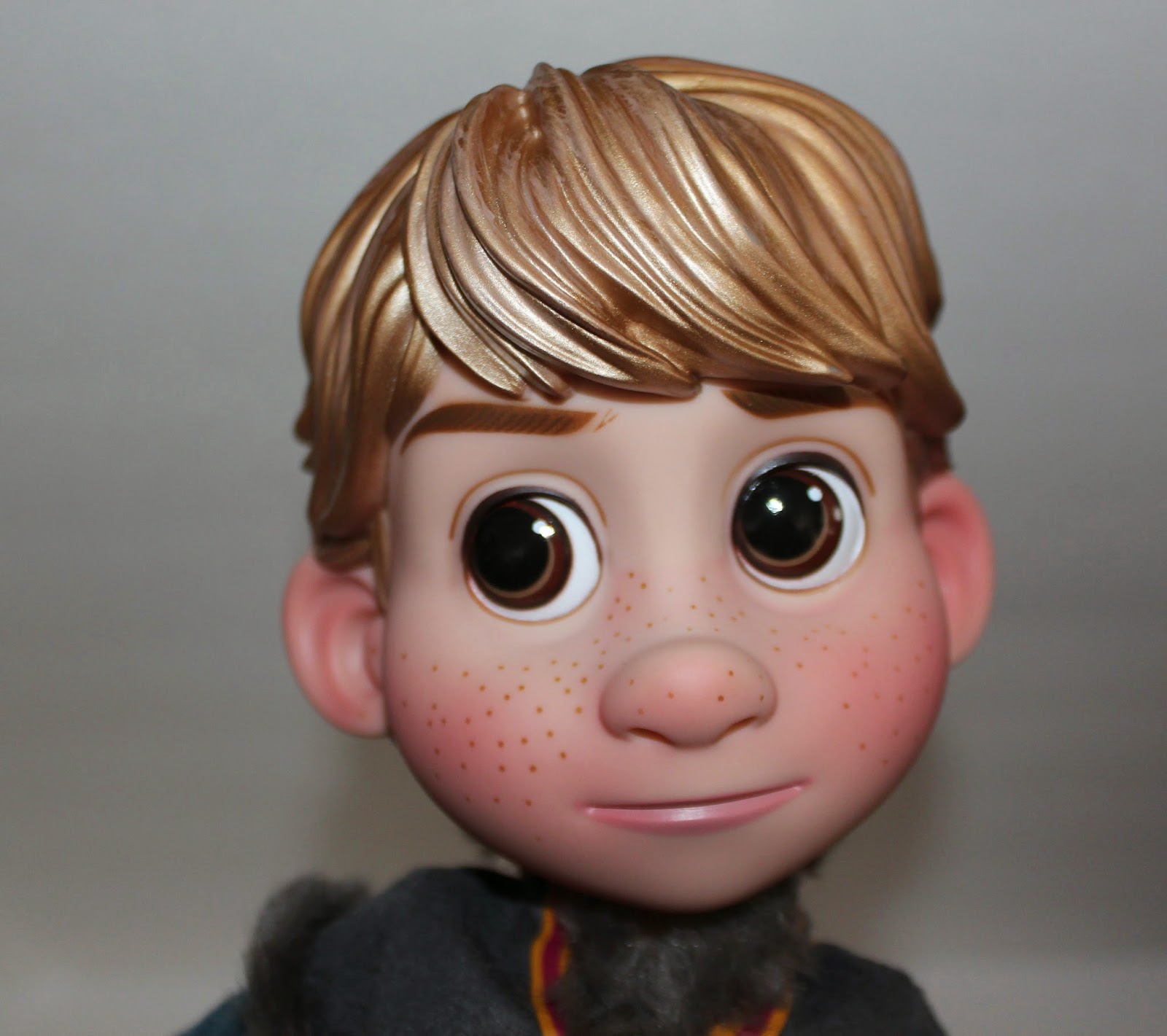 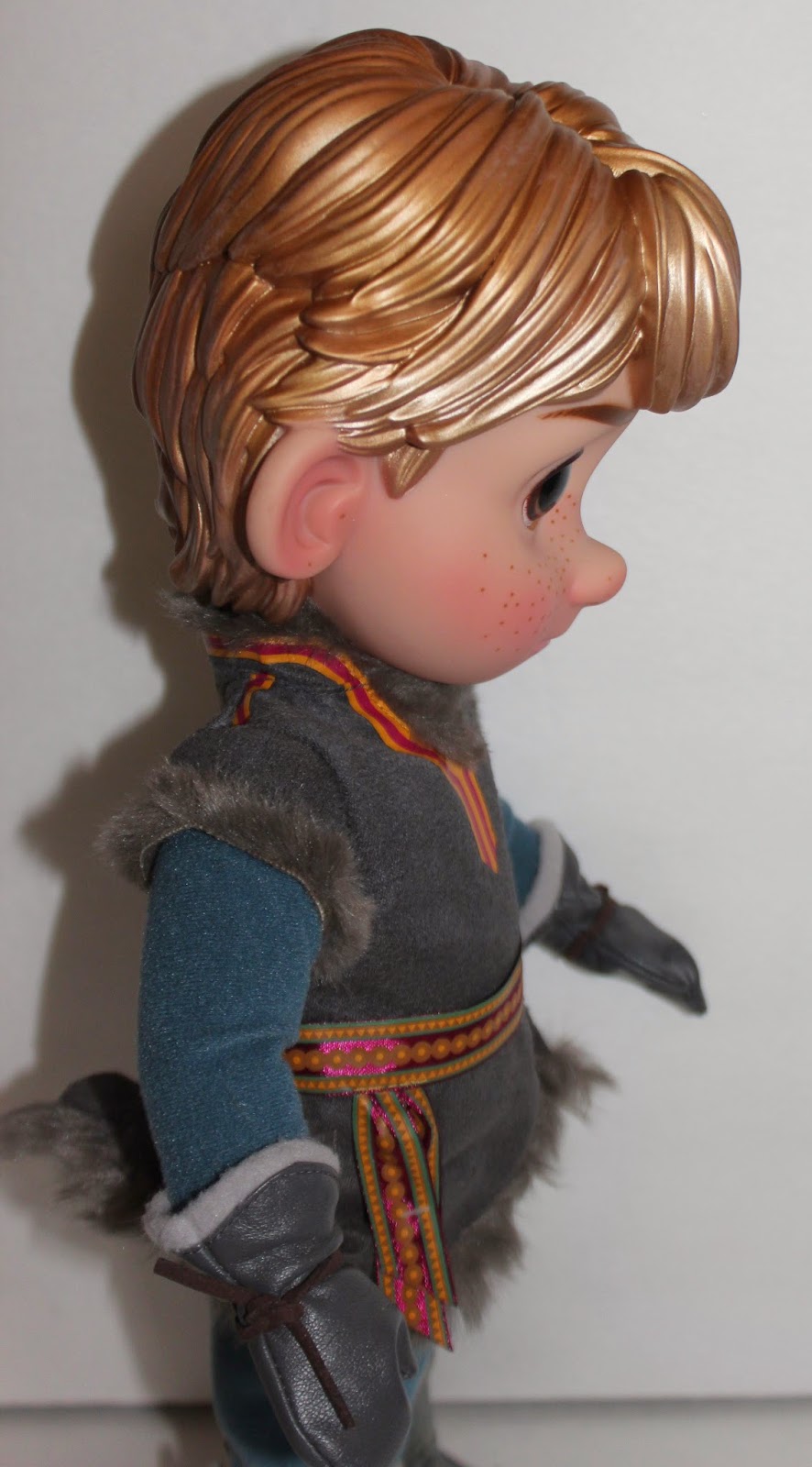 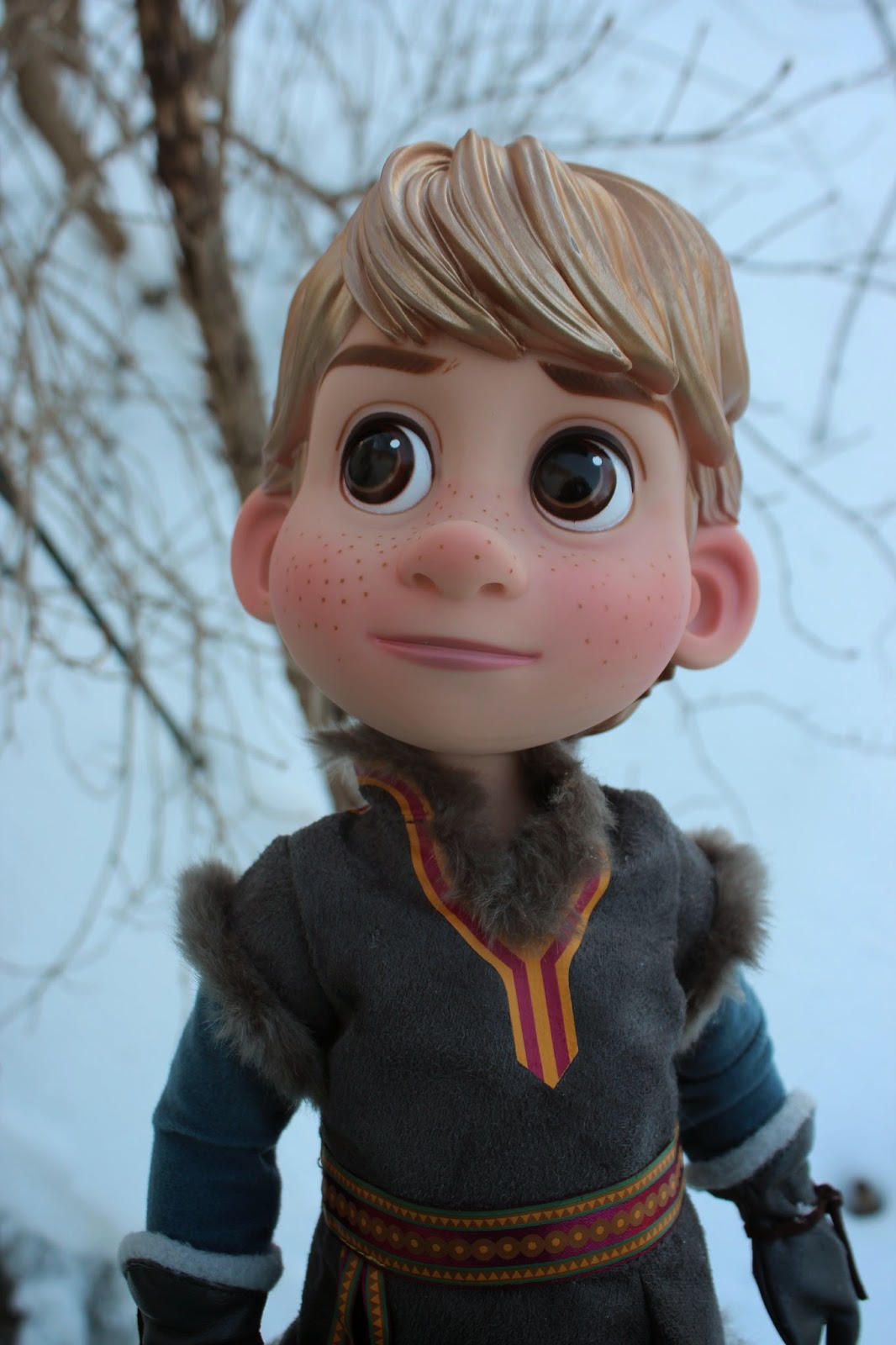 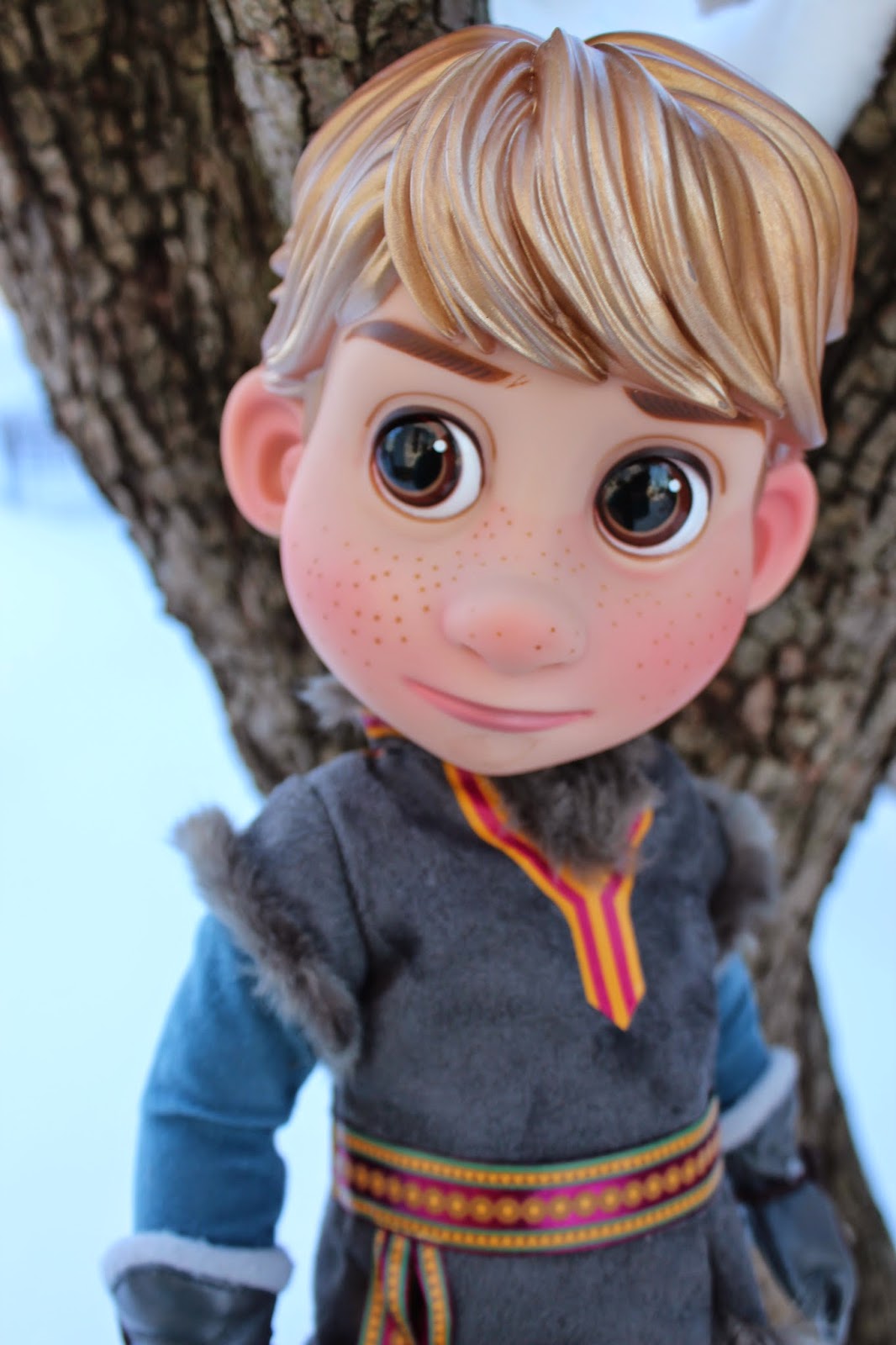 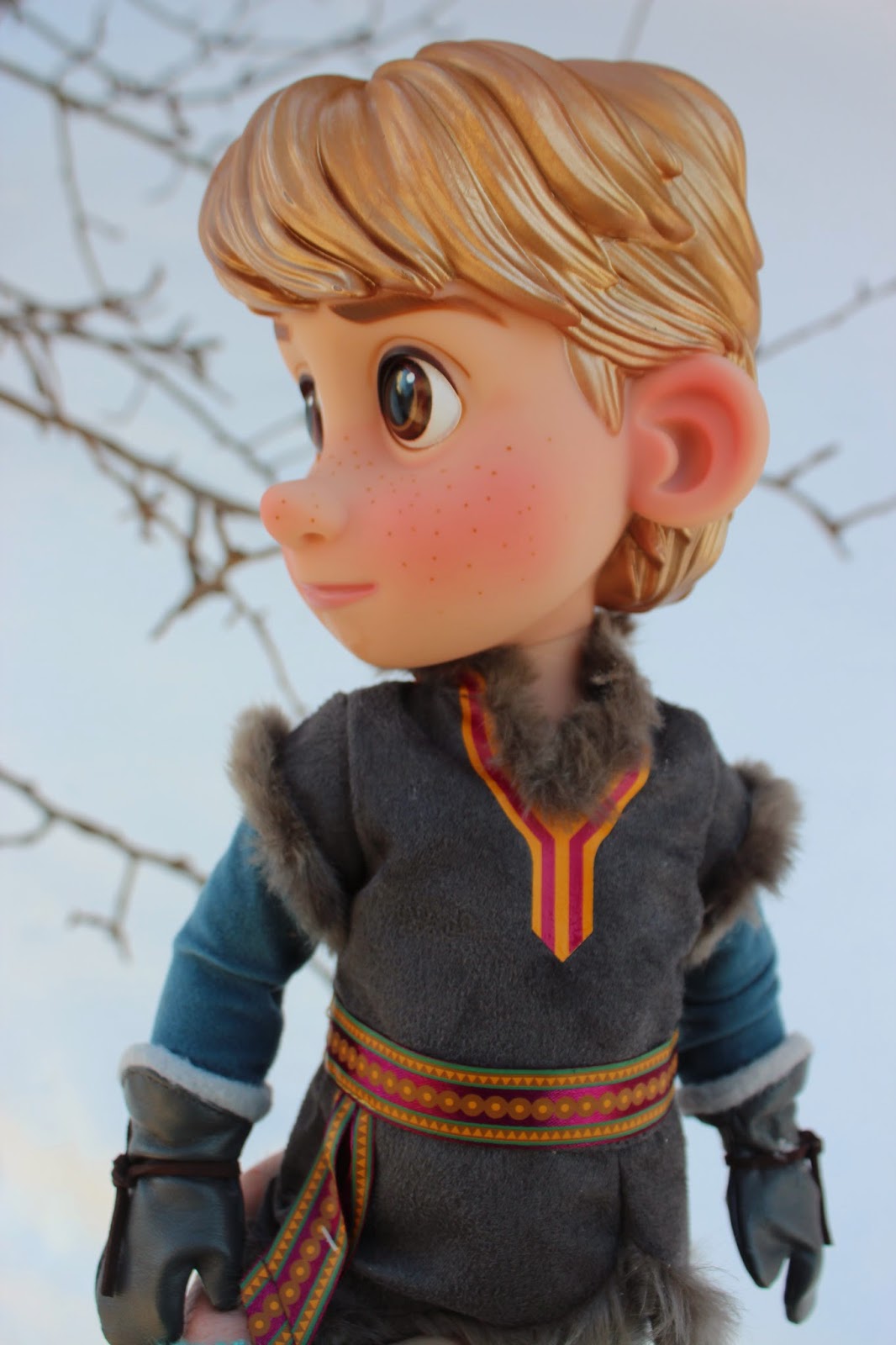 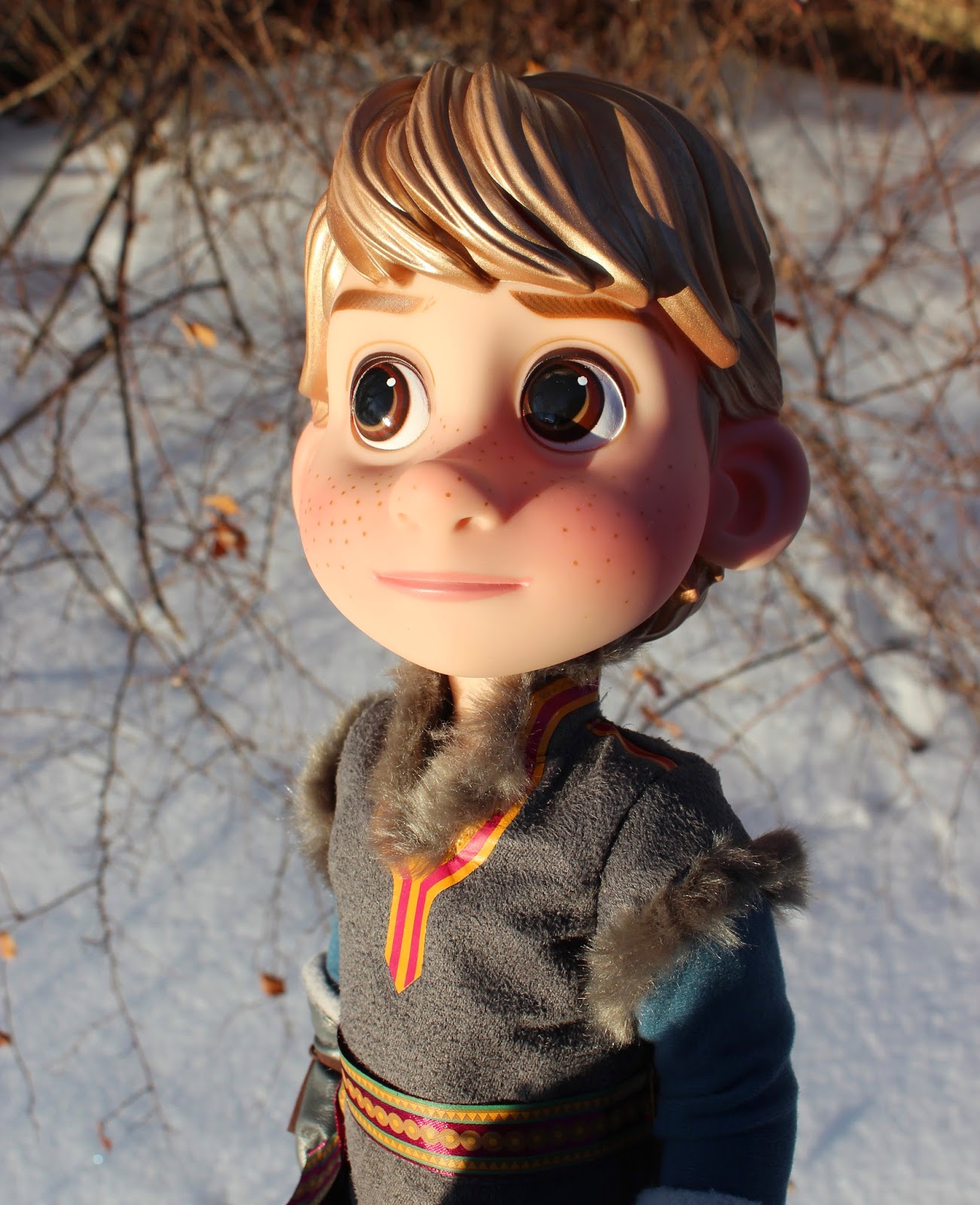 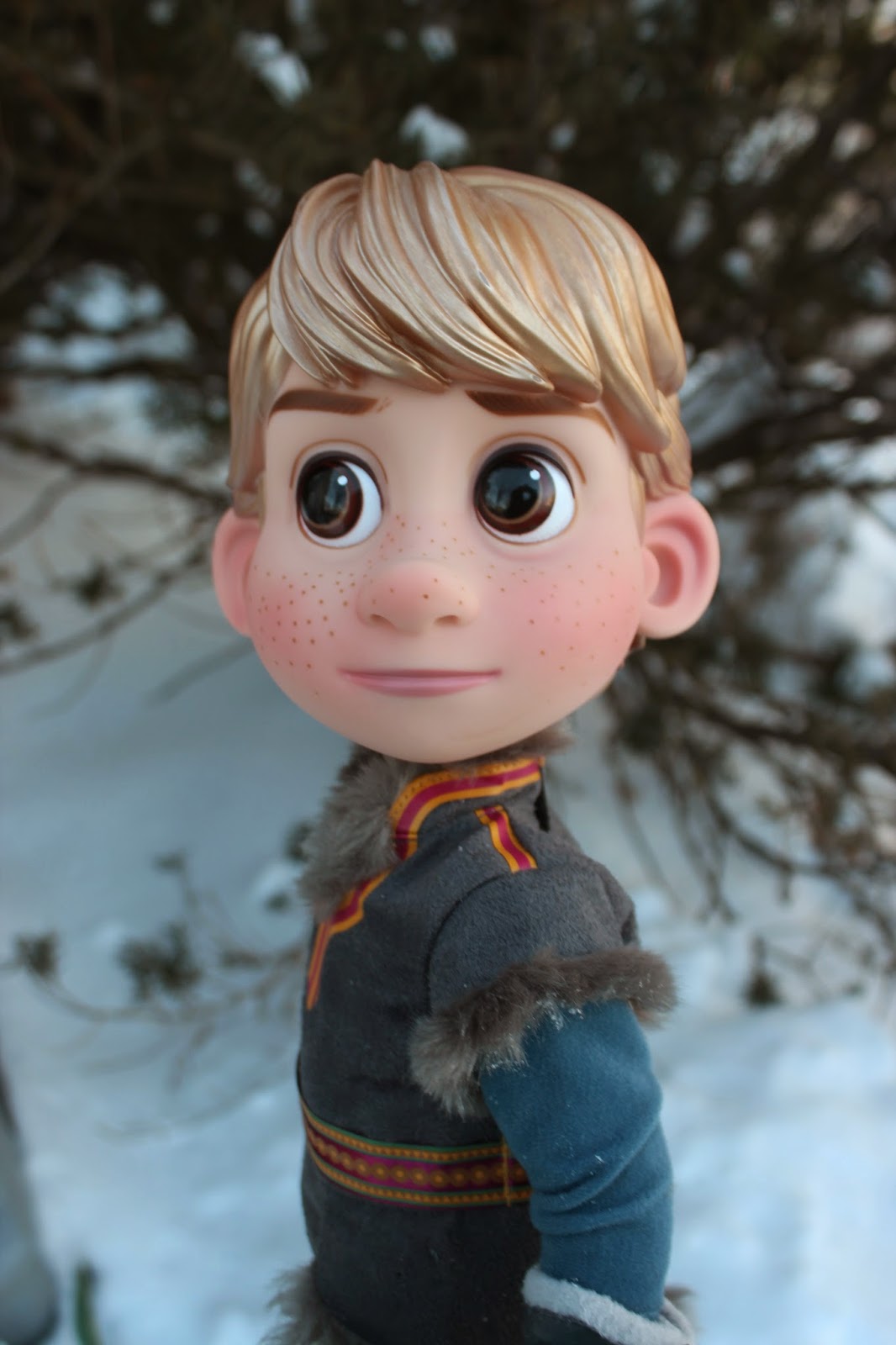 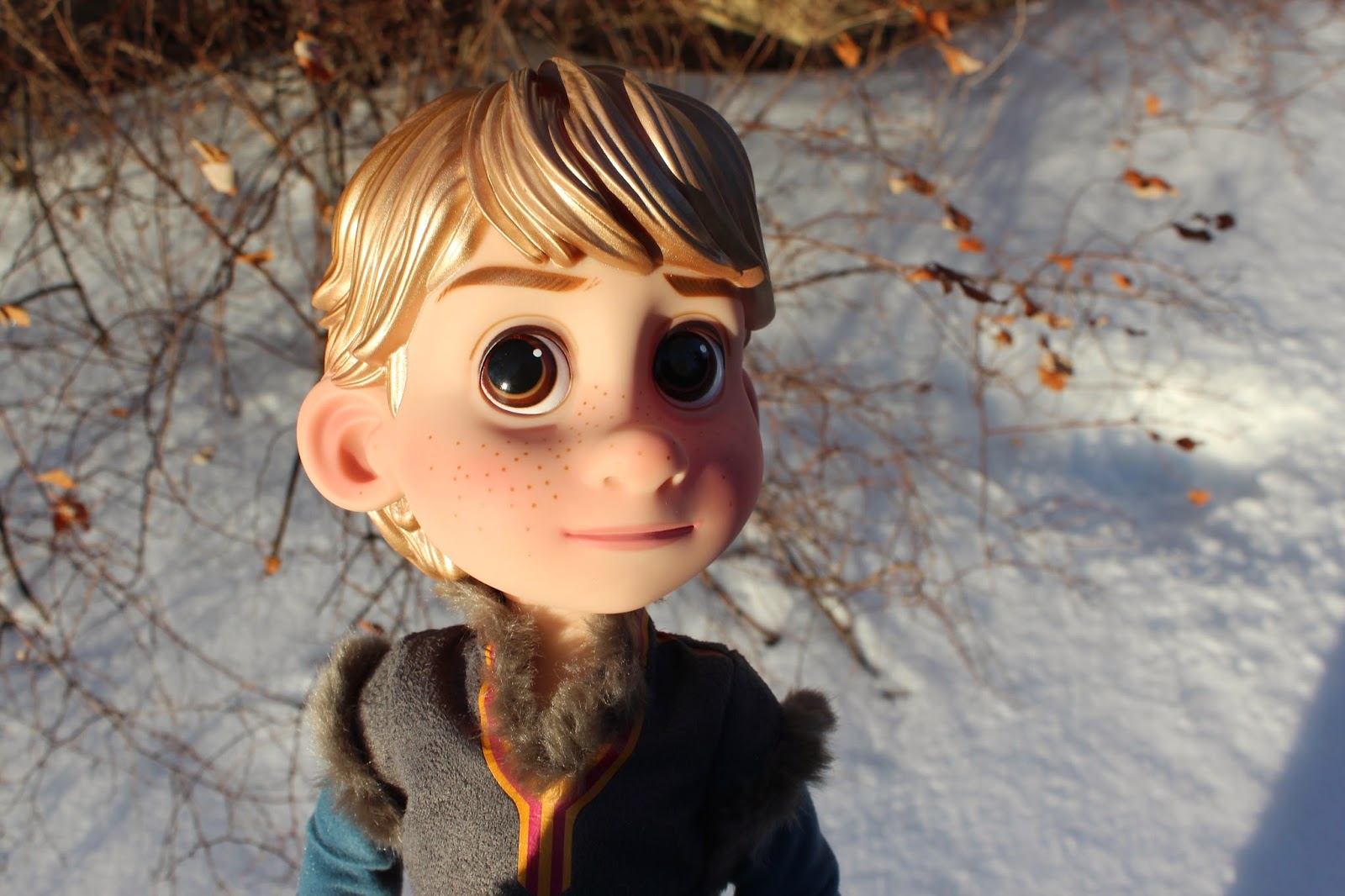 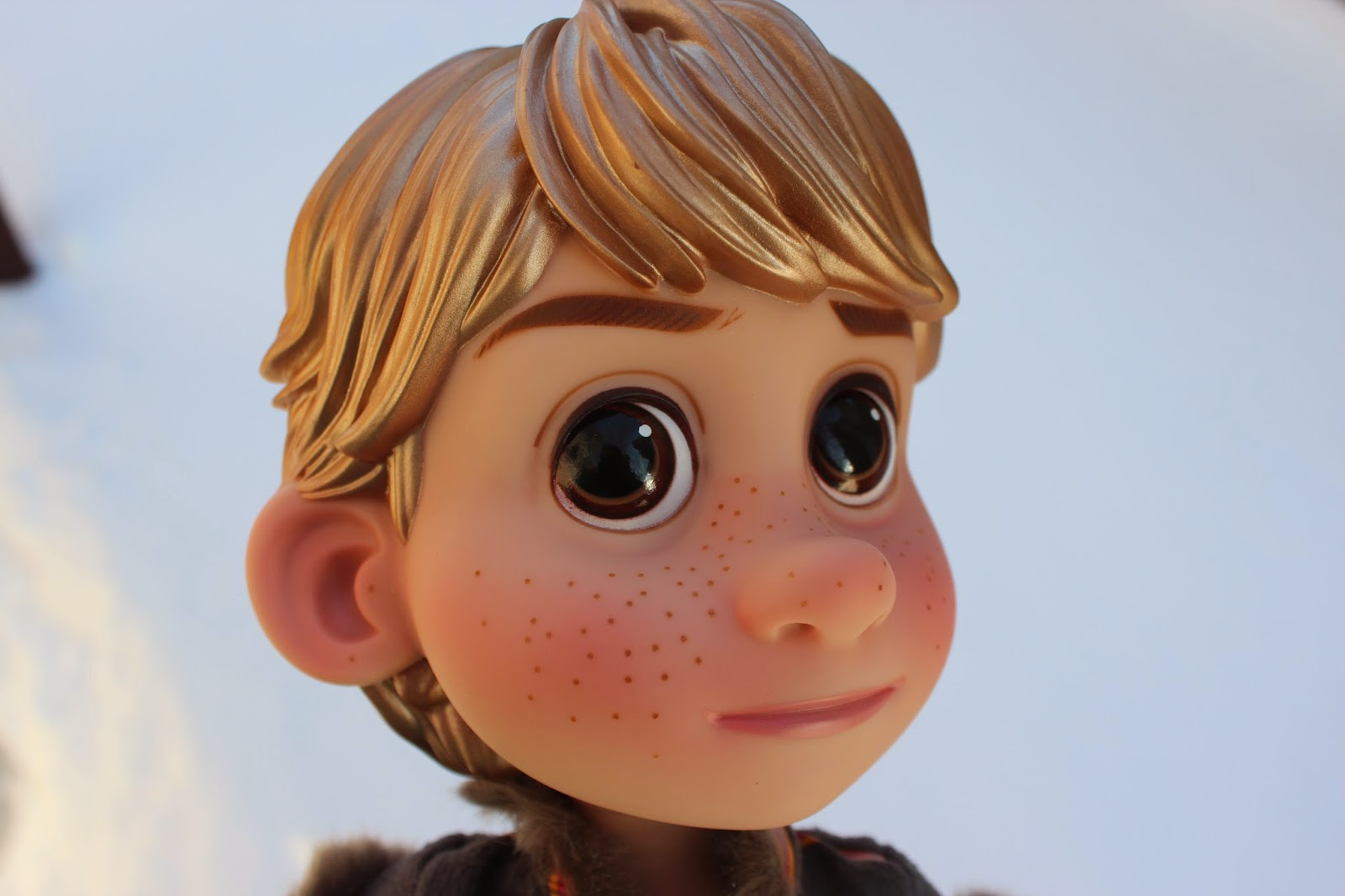 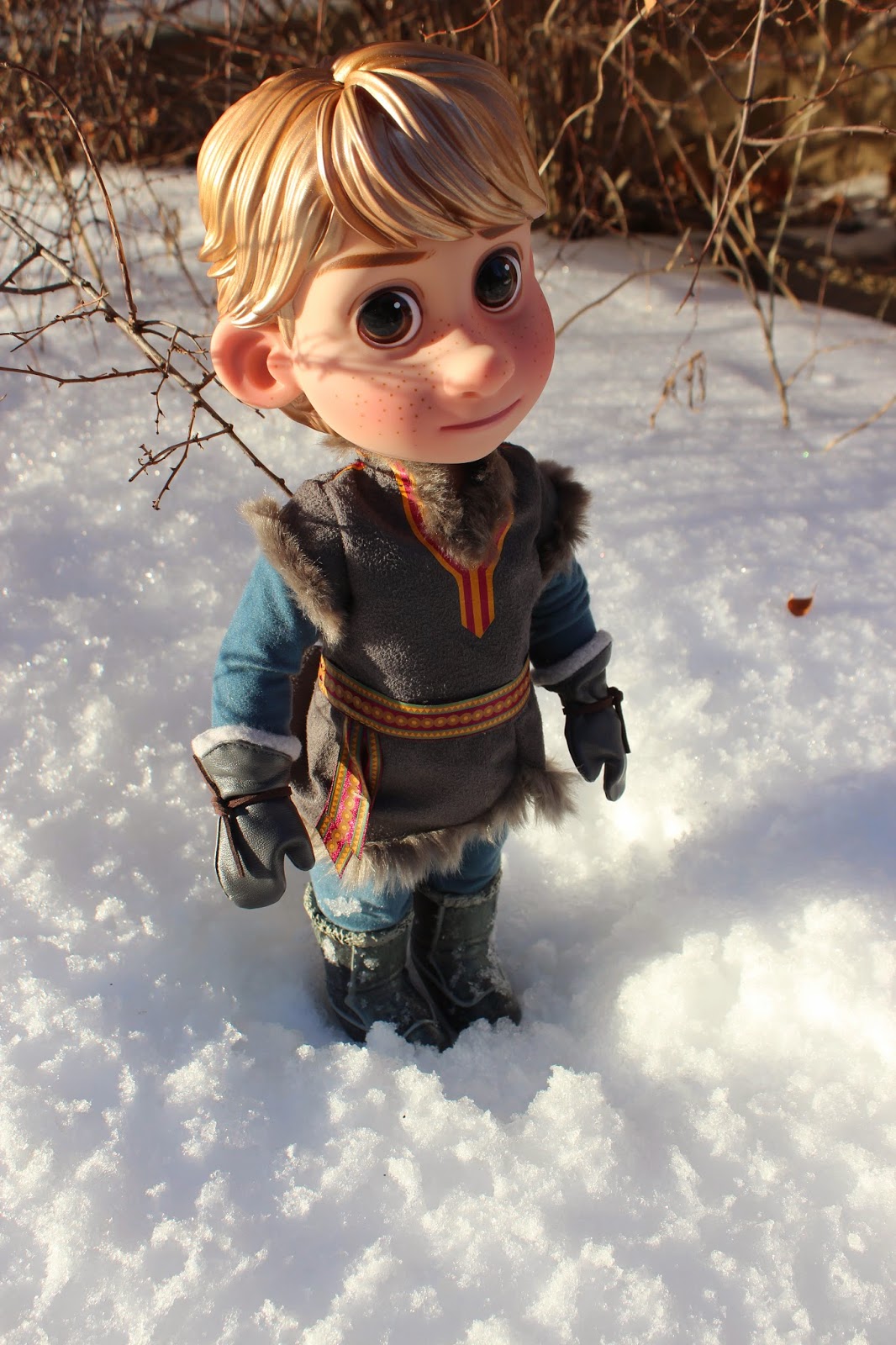 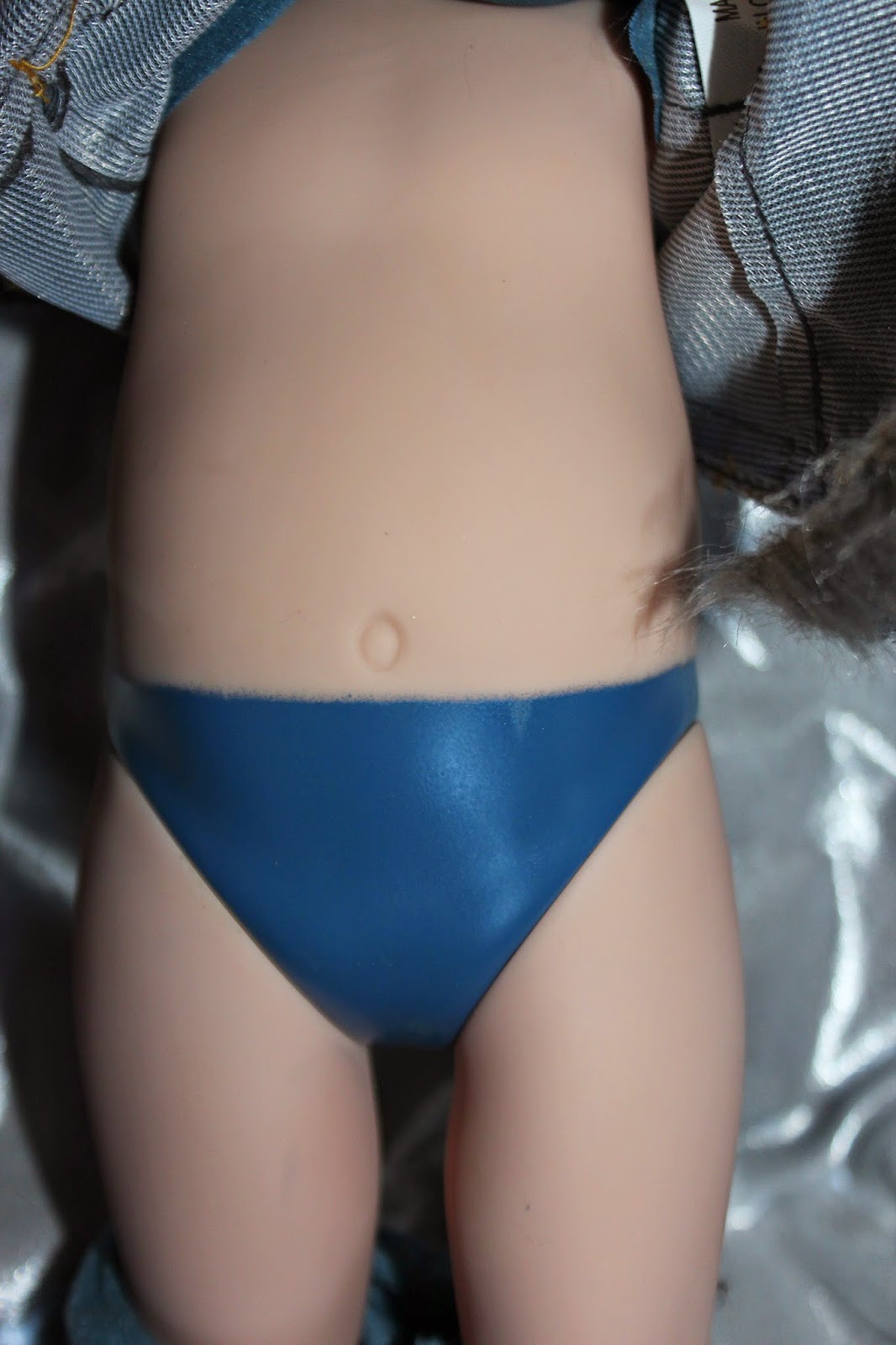 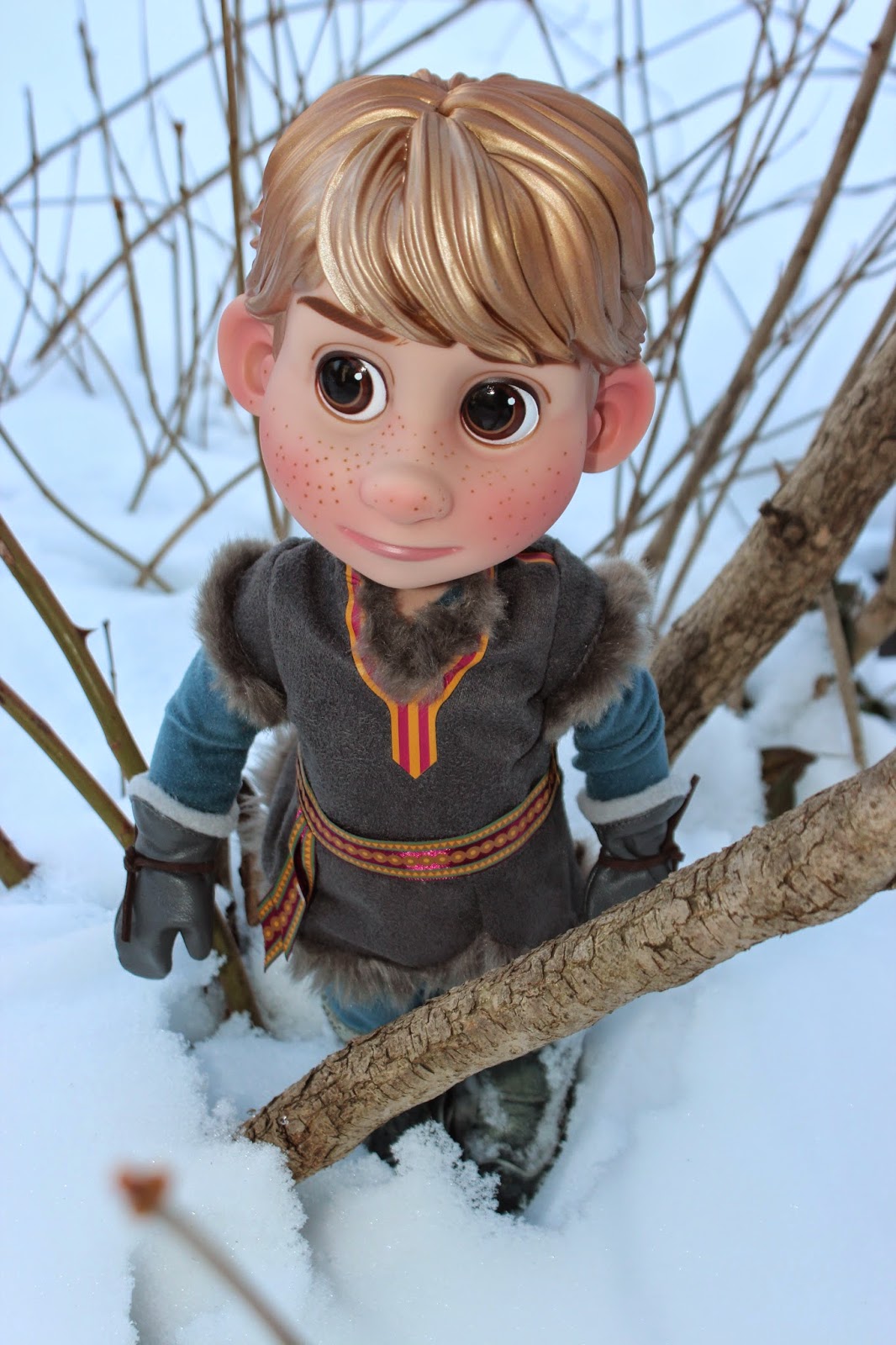 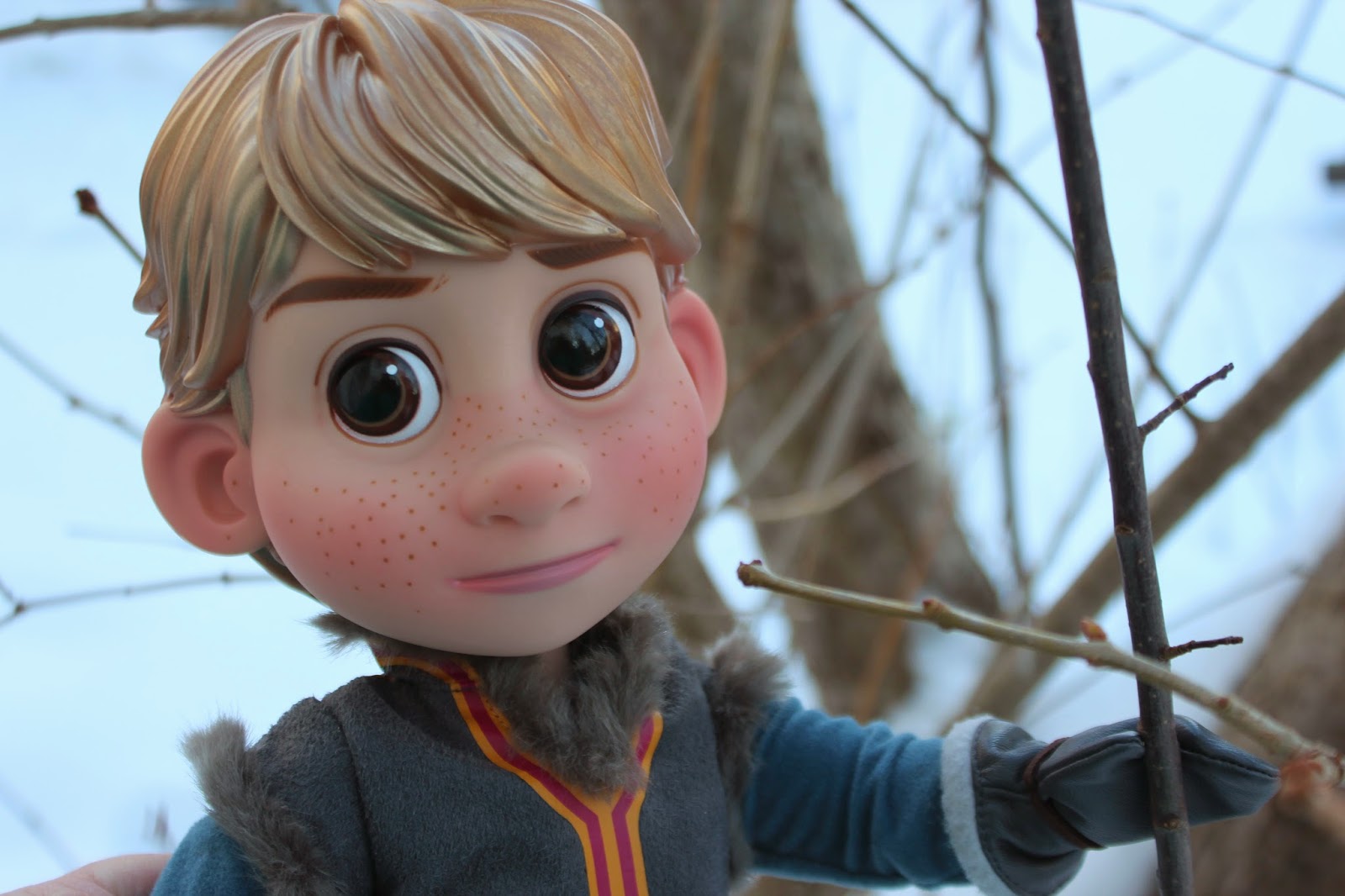 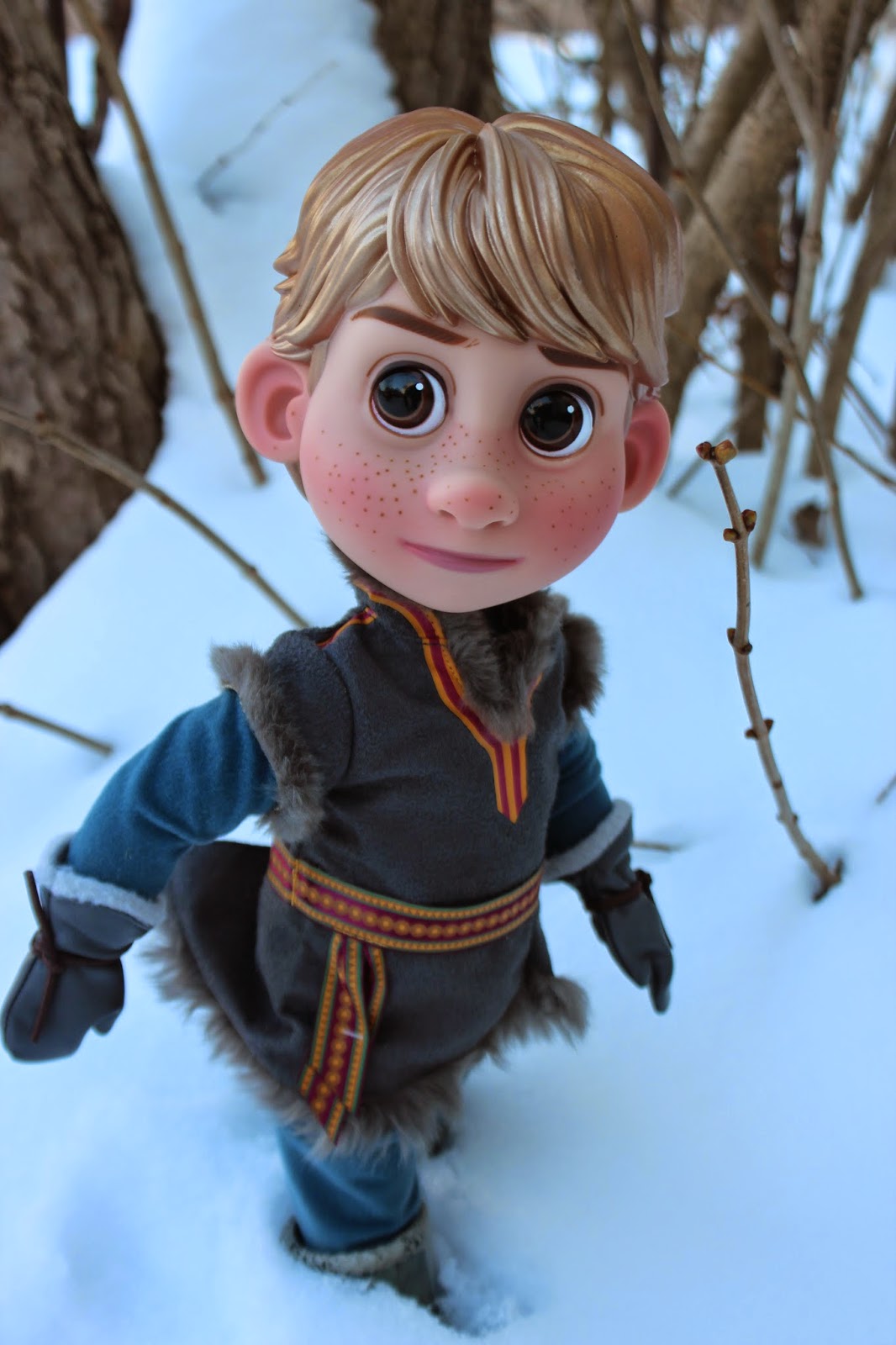 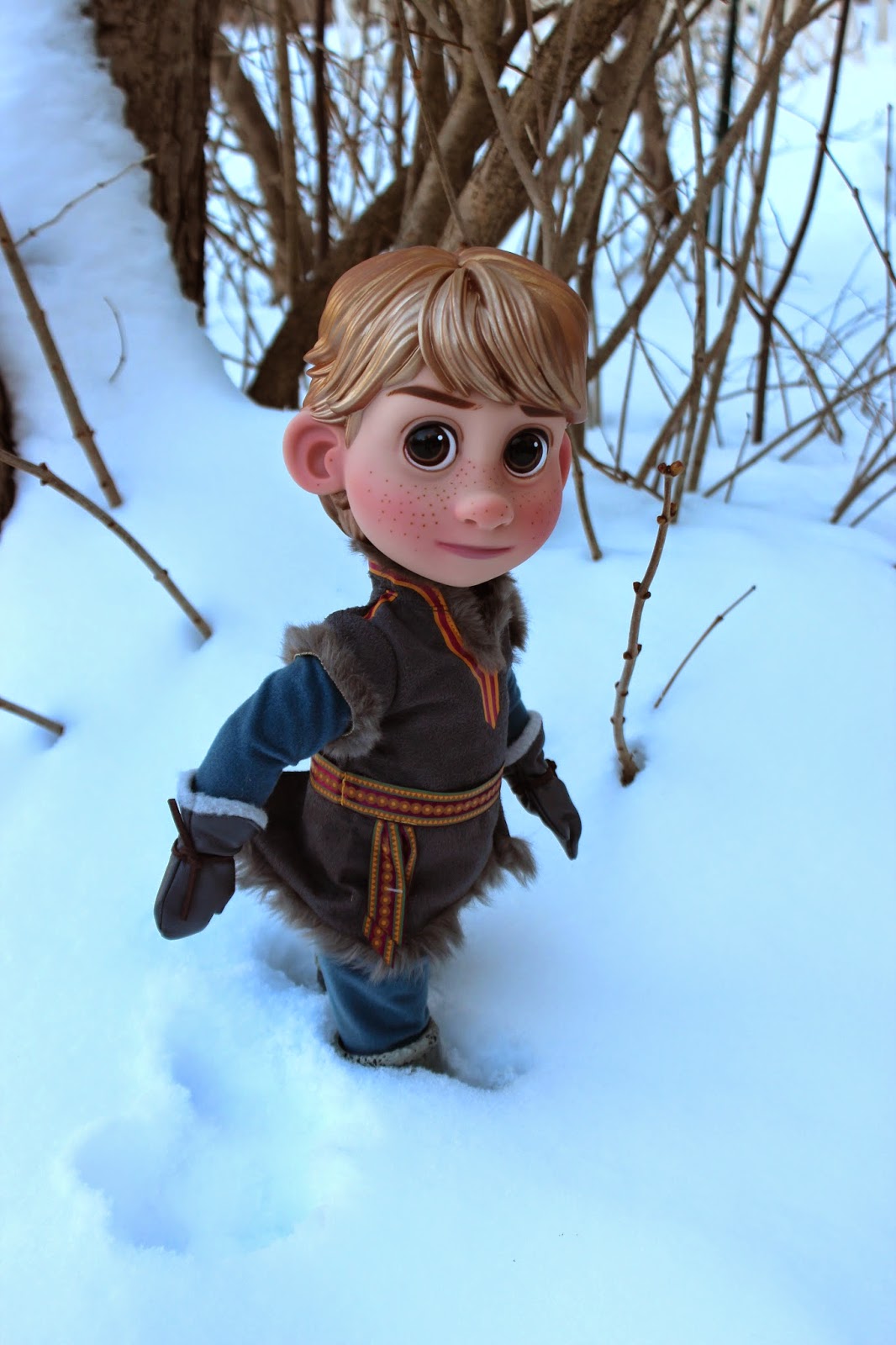 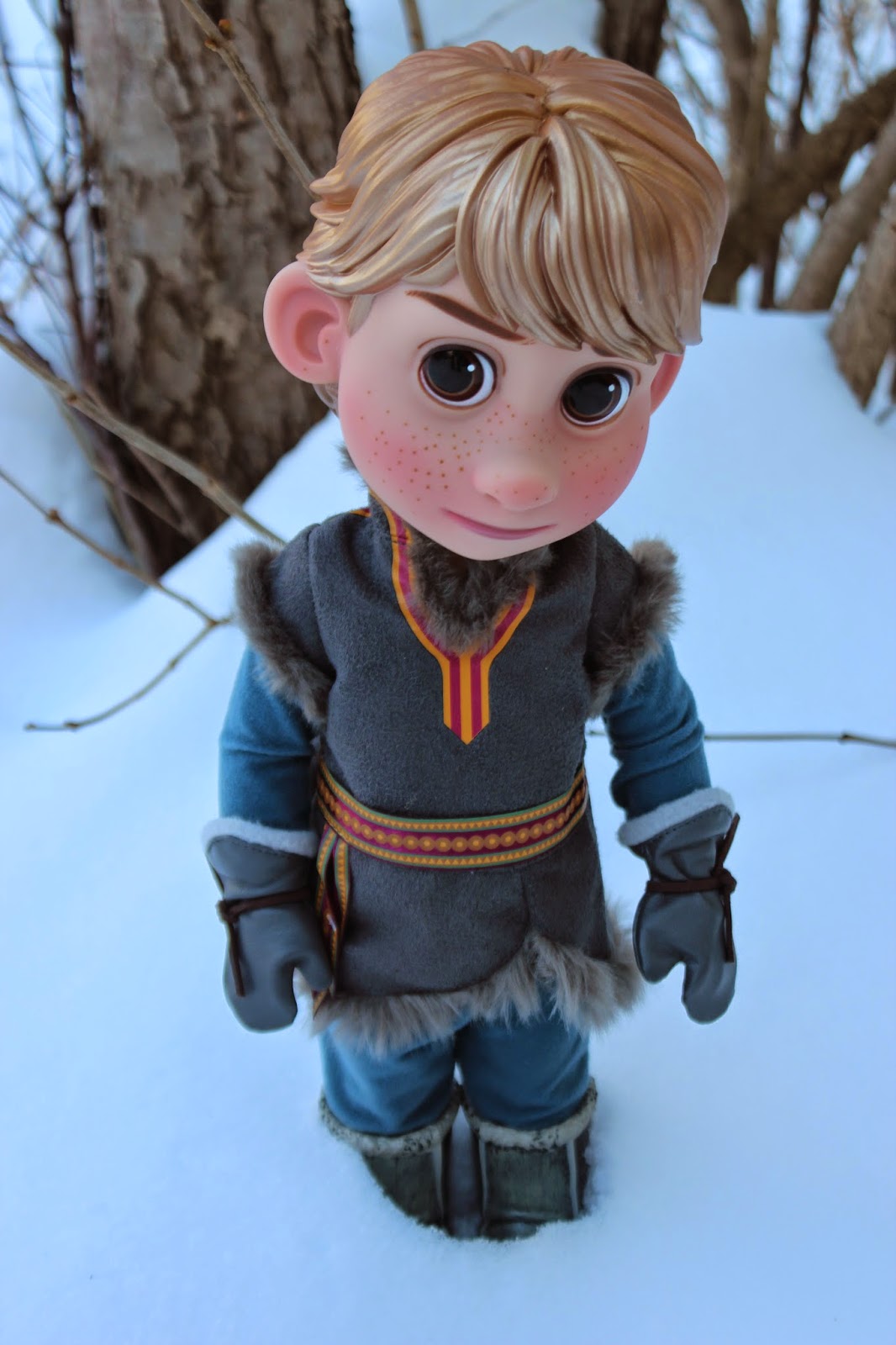 He's a nice, sturdy doll. His clothes are fairly movie accurate, but simple and easy to take on and off. (Except, supposedly, those gloves!) These animator's dolls have so much personality. They are usually around $25, but occasionally go on sale. I'm not sure the Frozen ones go on sale when all the others do though. When I was in our 'local' Disney Store last time all the others were on sale, but none of the Frozen dolls. That's probably because of their popularity right now. They might eventually go on sale with the others. I just hope they keep Kristoff in the line. But, I realize boy dolls aren't as popular, so I hope they don't discontinue him too soon. He's the only boy in the line, and boy dolls are so few any way. He has so much play potential. If he were redressed he wouldn't even have to be Kristoff. He makes a great every day little boy too.
He's a bit big, so I almost didn't get him. I'm glad to have him though.He was too cute to pass up!
Posted by Tam at 2:33 PM 5 comments: Links to this post