Okay. I admit it. the play set for this month is a bit of a cheat, but also really cool. To preface a little bit, when Ivy was little she was really into Kelly dolls. Her favourite dolls to play with were 'Blue', a former Tommy, and her sister 'Rose', who was a Kelly, so most of the doll stuff bought for Ivy had to fit them. One Christmas I was searching for Kelly sized stuff on Ebay when I came across today's 'playset'. I don't remember what I searched to find it, and I've never seen another one. It was perfectly Kelly sized though, so I bought it for Ivy.
It's a perfect little bounce house. 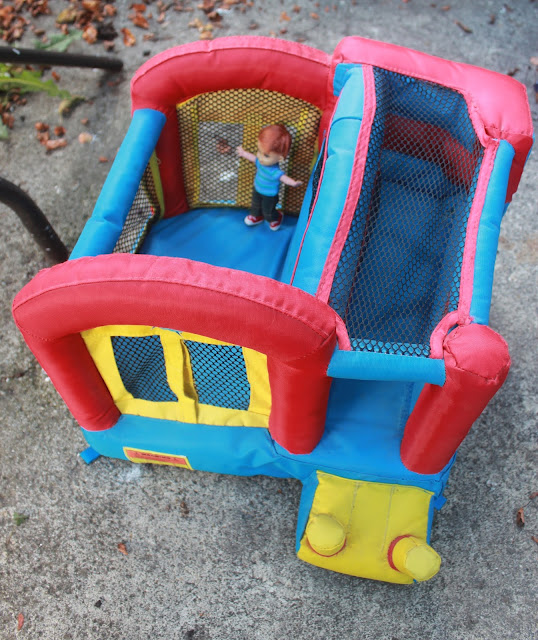 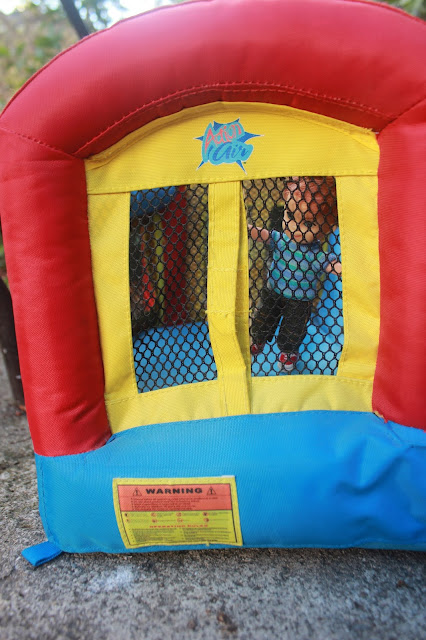 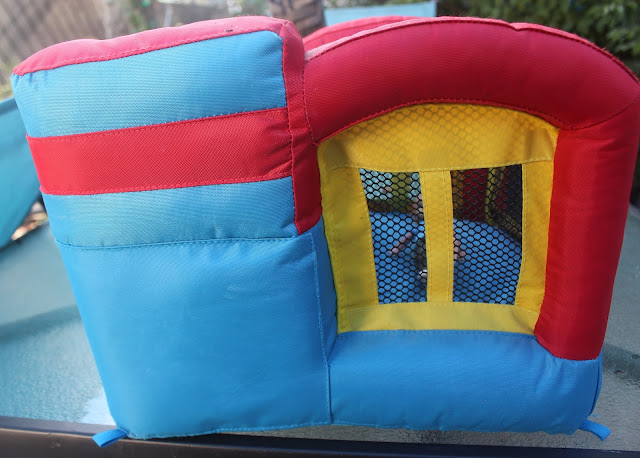 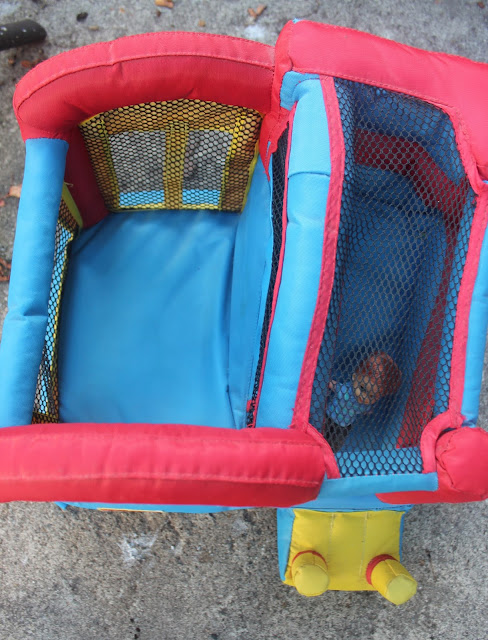 I always thought it might have been a salesman's sample. In looking on Ebay I see that there's a miniature Spiderman bounce house in the  'Sold' listings, that calls it a 'miniature store display'. I don't see bounce houses being sold in stores, so...? It's labeled 'Action Air'  ,which is a company that makes full size bounce houses. 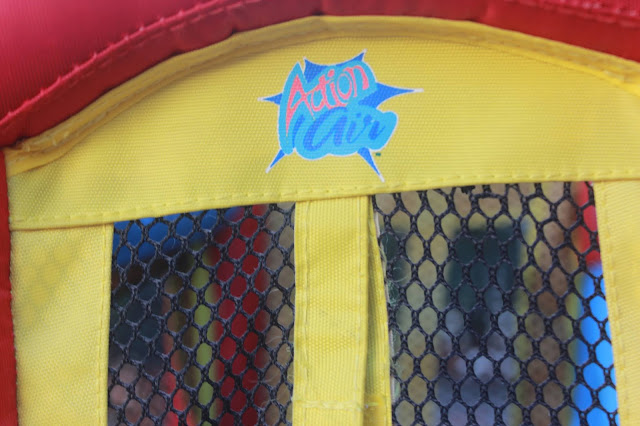 The bounce house is made almost just like a real one. The major difference is that instead of inflating, it's filled with foam. There's a zipper on the bottom. 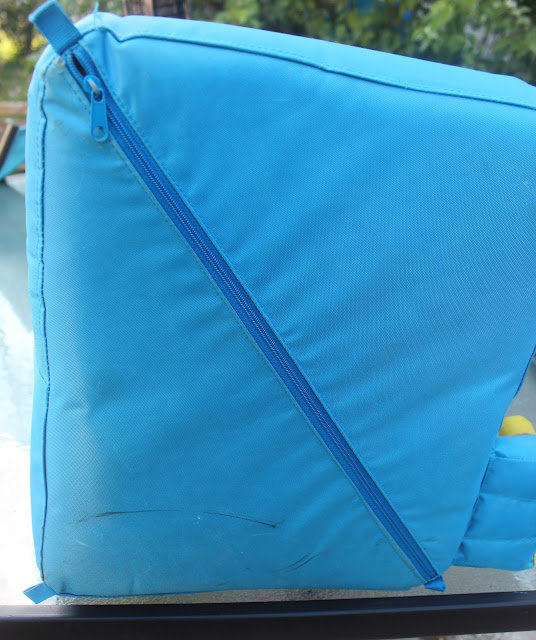 There's a warning on the front. It's obviously meant to show that there's a label on the real one, but this tiny one isn't very legible. 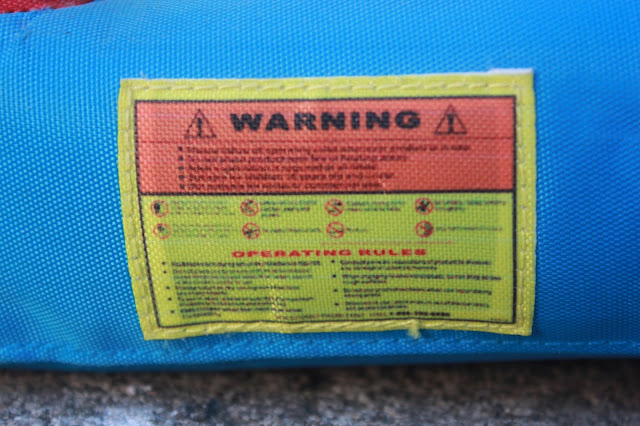 The opening to the bounce section has a Velcro closure. 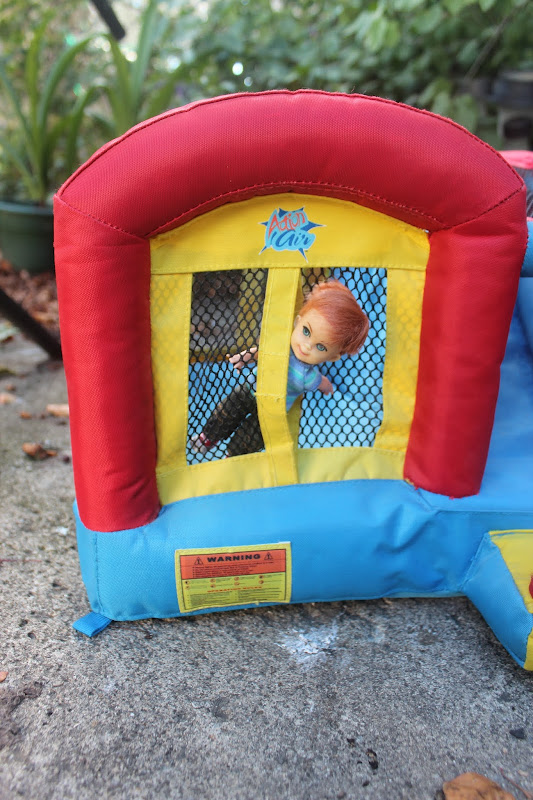 The sides are mesh, just like a real bounce house.  I'll tell you a story of what happened to child Fuzzy in a bouncy castle once, but not until the end of this post. 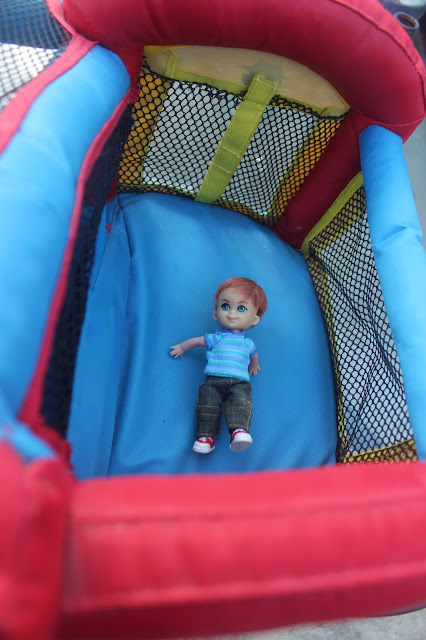 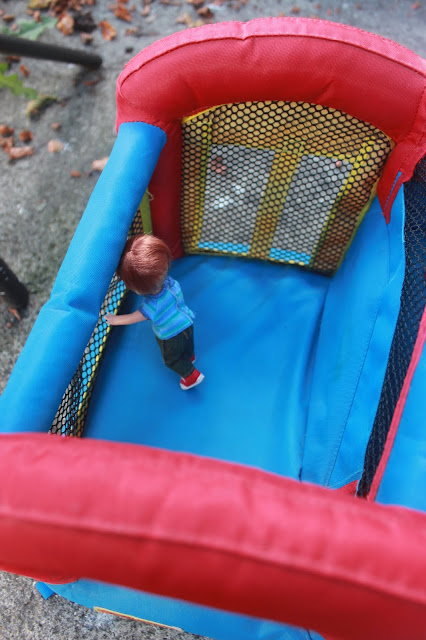 There's a narrow section in the middle for kids to climb from the bounce section to the slide section. 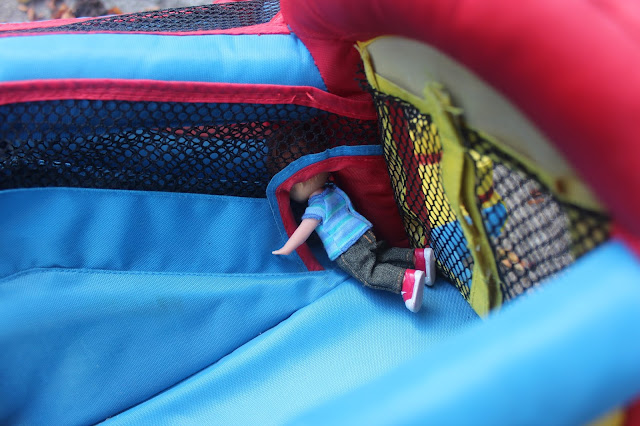 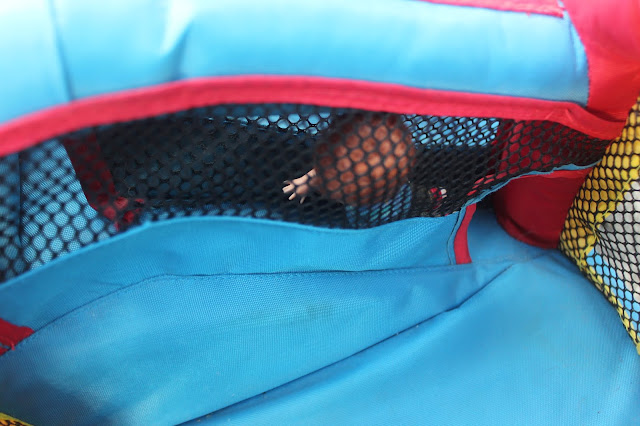 The tunnel emerges at the top of the slide. 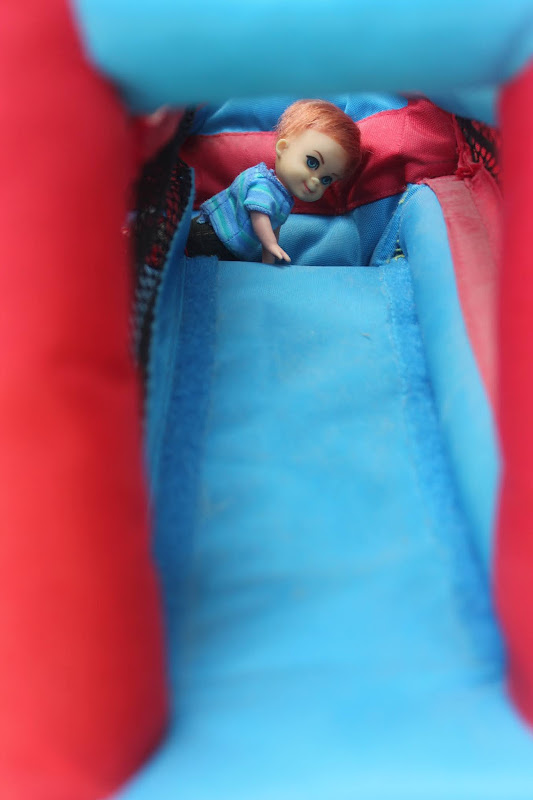 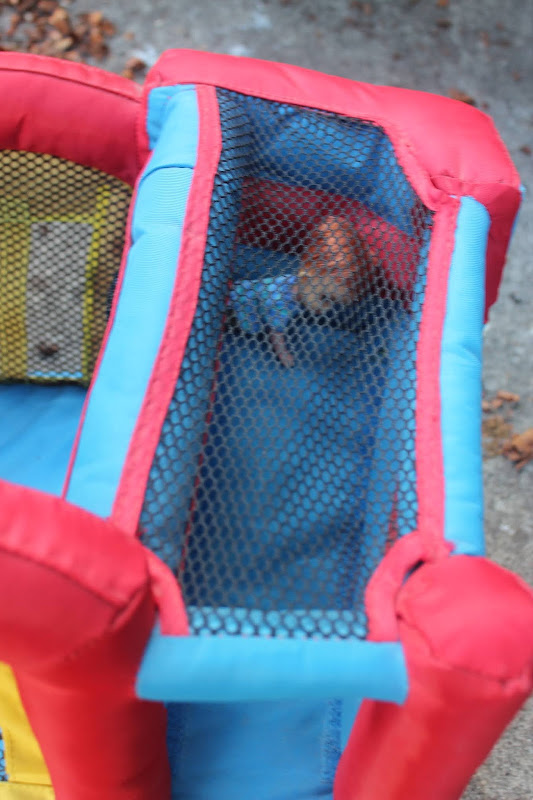 And there's the slide. 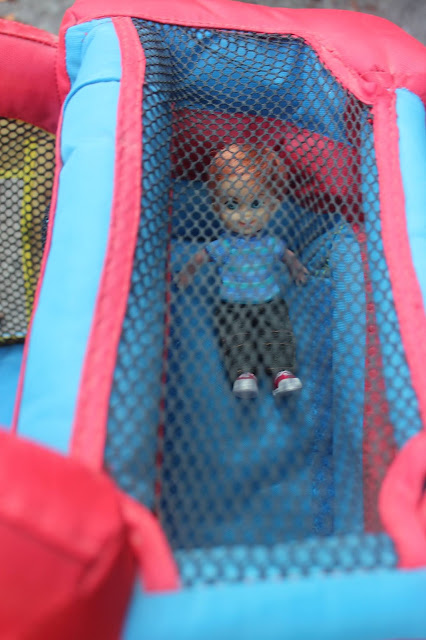 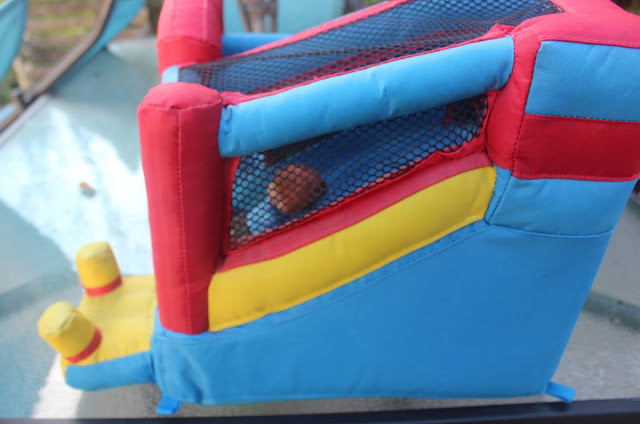 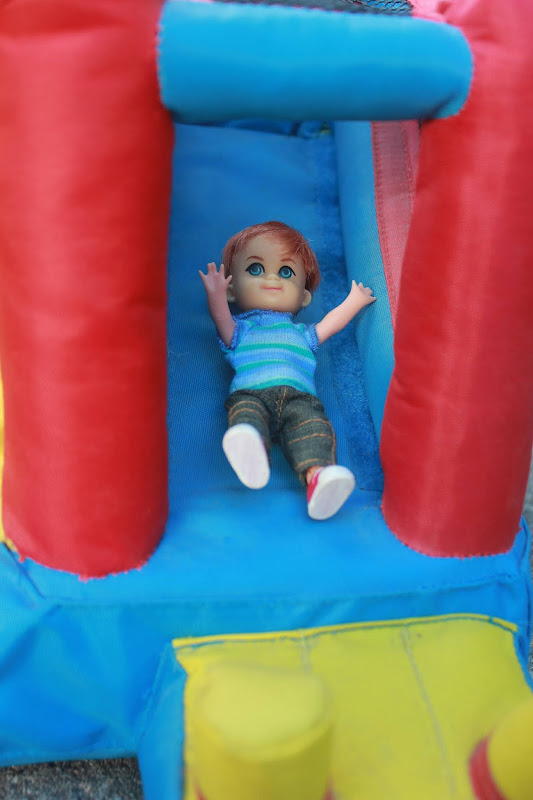 There are padded posts at the bottom of the slide. 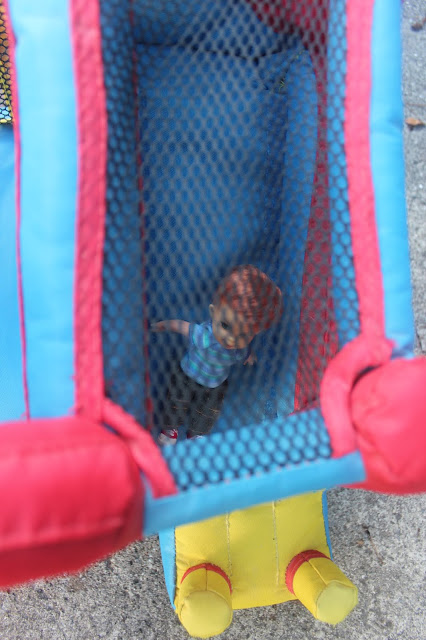 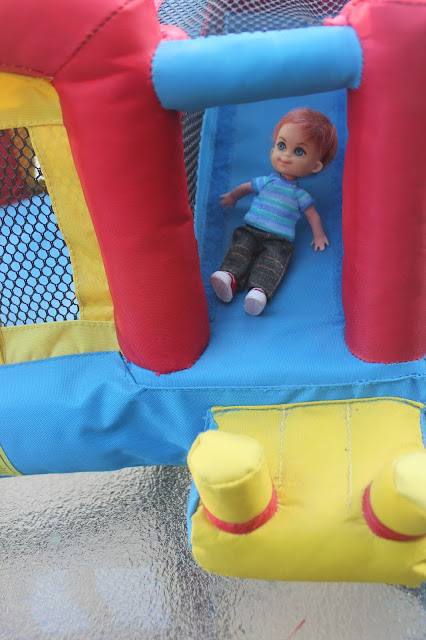 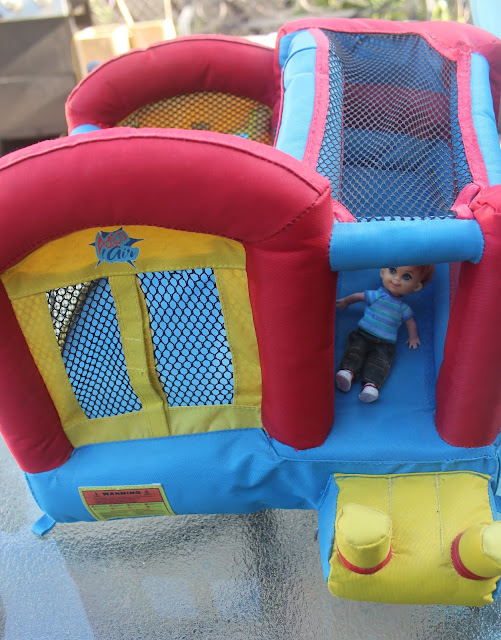 Okay. now for that story about what happened to little Fuzzy in the bouncy house at a kids event thing. Fuzzy, along with a bunch of other kids we didn't know, was bouncing in a bouncy castle, way back when the kids were small. Fuzz must have been about 10 or younger. All the kids were bouncing and having a good time. All of a sudden, the inflating device conked out, and someone screamed for all the kids to get out of the castle. The kids shot for the exit. Fuzz was knocked down by the herd of panicked kids. Unable to get up with all the kids trying to run out, (because the floor was squashy, and getting more so by the second as the air fizzed out of the castle.),  Fuzz rolled around, trying to get up. I was panicking too, because my kid had suddenly disappeared. I couldn't get in to Fuzz until all the other kids were out of the way. Once they were,  I dived inside, only to find Fuzz nearly vanished in the quickly deflating bouncy castle's floor. You see, Fuzz had not been able to get up, and had rolled into the crack between the floor and the wall. If I hadn't been such a paranoid mom that I stood and watched Fuzz bounce to make sure he didn't get abducted, things could have ended tragically. Once that castle deflated, the weight of it might have made it impossible for Fuzz to get out at all. Fuzz could have suffocated. I managed to pull Fuzz out of the crack and we got out. I'm not sure which of us were most scared by the whole thing. 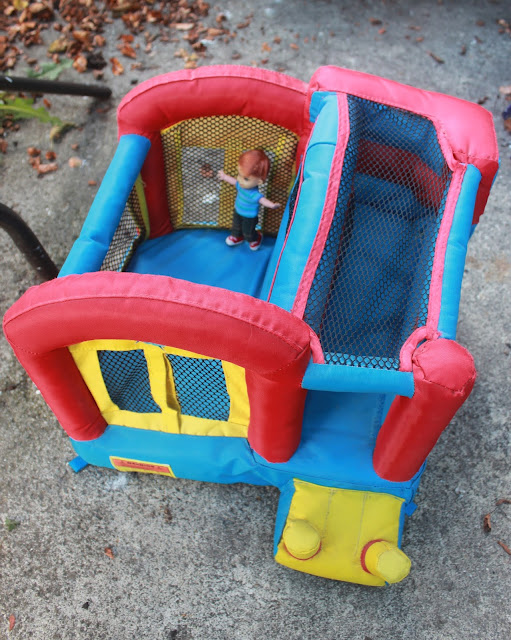 So that's this month's playset. See you tomorrow for the Doll Book of the Month selection, and soon we'll see my recent Goodwill finds.
Posted by Tam at 9:00 PM