The Toys of Christmas Past: Lori's Photos Part One: Dolls,Horses,and Games

Not my past this time. I've shown you most of the old photos, containing toys, from my childhood in various posts. These toys are from my friend Lori's past. In going through her old photos recently I found that there were tons of photos from Christmases,birthdays, and Easters,and that, going by the photos, she got just about every cool toy going at the time. Lori was born in 1961,(making her a few months older than I am, which I always like to point out!),so that should give you some idea of the dolls and toys you're going to see. I know for a fact that she had a lot of toys that don't show up in the photos,like Mrs. Beasley and Little Miss No Name,and Flatsy. Lori seemed to have gotten most of the popular dolls of the day. That continued until her mom figured out that Lori was more into animals than dolls. And before you ask, no,she no longer has ANY of these toys. Lori's mom Norma didn't let dust gather on anything. She kept everything moving with yearly yard sales.
Lori developed her love of horses early on.That may be why she got Marx's Thunderbolt horse. (Or maybe Thunderbolt started her obsession with horses. Who knows? Which came first,the horse,or the...horse?) You can see her Thunderbolt horse in the photo below. You can watch a commercial for the Johnny West toys,including Jane and Thunderbolt HERE. One question after watching it: Why would Geronimo,an Apache,name his horse Comanche? The Comanches were a rival tribe who attacked the Apaches for years. Just another case of the 'any old Indian name will do' kind of thing that used to be done. Just saying.

Thunderbolt was made by Marx as part of the Johnny West line. You can see some dolls from the line in my posts HERE and HERE.

The doll is Little Lost Baby,made by Ideal in 1968. She had three changeable faces inside her somewhat solid hood. I managed to find a close up of the box lid online.


She used batteries, and cried or laughed at the flip of a switch.

This doll even had a tag on it explaining that it was a little lost baby. You know,like somebody left it on your doorstep. This doll is waaaaay more me than Lori! I would have loved this. Lori would have left the annoying crying kid on the doorstep. You can see a video of the doll HERE.
The Little Red Schoolhouse was made by Remco. It fit their Heidi and friends dolls,although it proudly stated on the box that it was
'FOR EVERY TINY DOLL MADE'
Well! Ok then. I wonder what 'tiny doll' Lori had. From the looks of things,probably ALL of them.
Moving on,(Or, rather, back I guess) to Christmas 1967.


Hasbro's Don't Spill the Beans was a game that was made for years. Maybe it's even still being made.


Cadaco made the Bas-Ket game,described as 'real basketball in miniature'.

The Kenner Big Burger Grill,made in 1967, used a 150 Watt light bulb to actually cook. Provided in the set were powder packets that could be mixed with water to make buns and pancakes. (Sounds pretty gross.) You could actually cook real hamburgers,eggs,etc. You can watch a video of a Big Burger Grill in use HERE. The thing I'd like to point out here is, Lori still doesn't cook. No matter how much Norma tried,Lori,to paraphrase Doctor Zaius, could not be domesticated.
That thing out front with the big eyes is an Incredible Edibles set. Like the Thingmaker oven it was another of the overheated toys that could take your skin off. The tubes contained candy liquid called 'gobble degoop' which you used in the molds to make candy centipedes, etc. I'm guessing this went over a little better with Lori than the Big Burger Grill. Incredible Edibles was similar to the Thingmaker,the difference being that the Thingmaker used liquid goop, that was probably very toxic, in it's molds and heated in the Thingmaker to make rubber toys. My kids had a similar thing called the Dollymaker Oven. I had to open all the windows when they used it because of the headache inducing smell,so they got pretty mad they weren't allowed to use it in the winter!
I can't tell which doll that is. Anybody? From the colour of the box,maybe a Horsman doll? The other possibility is Deluxe Reading/Topper's Baby Party doll. That doll would be the right year and came wearing a pale pink outfit with short legs.Plus it would go along with all the other cool toys Lori got. Baby Party ran on batteries, and blew a party horn,blew up balloons,blew bubbles with a bubble pipe, and 'plays with party favours'. (In other words, blew party favours? Just say so!)
In the lower right corner you'll see the Mattel Bugs Bunny talking hand puppet. 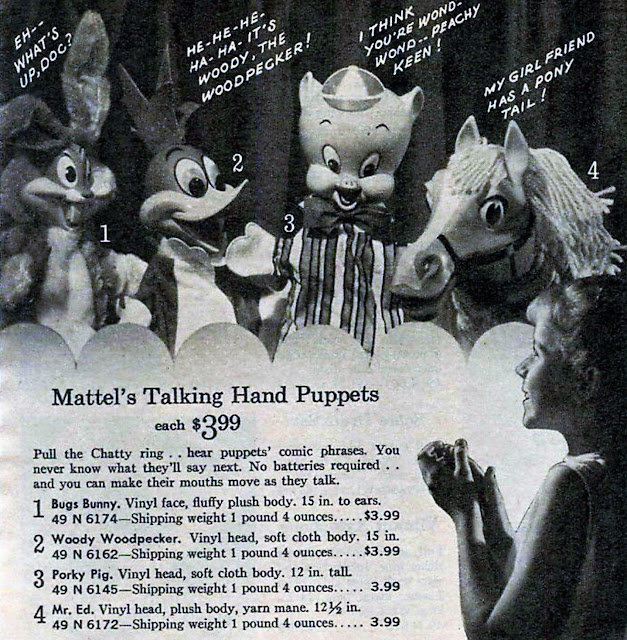 Of course. Everybody knows that Lori is Bugs Bunny and I'm Daffy Duck. Right Lori? They didn't make a Daffy puppet, but I did always kind of want the Porky Pig one.

Holy rarities Batman! Lori really did have everything! Including the rare Remco Elly and Andy Baby Mouse Twins 3 Story Treehouse! That's it on the left.

Awwwww! I like baby mice! I think if I had known Lori when we were this little,(we met in middle school.),I would have wanted to go to her house and covet all her toys...and she wouldn't have let me come.
That's the Schaper Voodoo Doll Game 'for boys and girls'. Um,well. That explains a lot,doesn't it Lori? Today Lori loves horror movies,and going on ghost hunts. I'm starting to see where that stuff comes from. 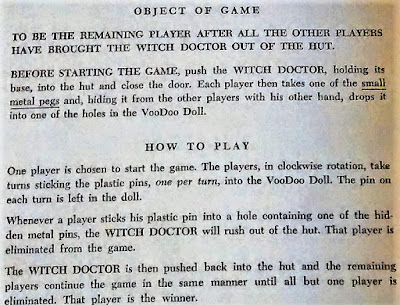 My mom would NEVER have bought me this game...although I might have liked it actually.
Tricky Tommy Turtle was a battery operated toy that rolled along,or stopped, if you blew a whistle. You can see a commercial for him HERE.
That's the Ideal Motorific Action Highway 77.  It's a slot car set. Slot cars are toy cars with pins on the bottom that run on a track with a slot in the road where the pin fits. Slot car racing is still popular amongst some toy enthusiasts.You can see the Motorific Action Highway in use  HERE.
One thing I notice here, and have to applaud Lori's parents, Bruce and Norma, for: Like my parents, they bought not only 'girly' toys for their girl,but also stuff that would have been considered 'boy toys' in those days. The horse van, the Action Highway 77 toy,the Hockey and Bas-Ket game,and more stuff we'll see in upcoming posts,would have been stuff mainly bought for boys when we were kids. That's very unfair. Even now I've been in the toy aisle and heard parents say to their kids, "That's the boy/girl stuff. Your aisle is over here!" Whatever! Let the kid play with whatever they like.

Of course, maybe it's just that Bruce and Norma bought toys they would have liked...

We'll see more of Lori's Christmas photos and her toys and dolls  in our next post.
Posted by Tam at 3:55 PM