First of all,I have updated the previous post with a few pictures of little Lori and her mom and dad on Christmas,1967. Somehow I missed them when I did the post.
This time we're looking at the Christmas of 1969. 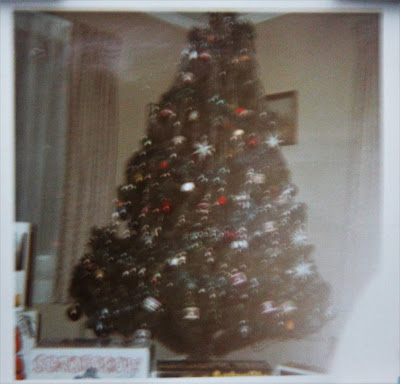 The first toy peeking out in this photo from 1969 is the game Scarecrow. I can't find a picture of this game with this white box, but it seems to be the same game as the ones I'm finding. It's a target shooting game by Ideal, with suction cup darts. The object was to shoot the crows off the scarecrow's arms.
The next picture shows more goodies,as well as the Scarecrow game again. To the right of the Scarecrow is the Astrolite set Lori talked about loving. It was by Hasbro,the same company that made Lite-Brite. (And incidentally, Astrolite is also the name of a high explosive, invented in the 60's,also known by the name 'liquid landmine'!) Like Lite-Brite,Astrolite was lighted. But unlike Lite-Brite, Astrolite made more than pictures. Futuristic cities could be built on a light table with clear plastic tubes and shapes. The light from underneath and the clear building materials made the cities glow. 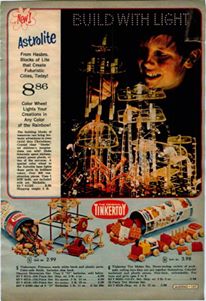 Lori couldn't remember the name of the toy when she originally told me about it, but it was one of her favourites. With her description and some research I managed to find out what it was,and I managed to replace her Astrolite for her birthday last year. 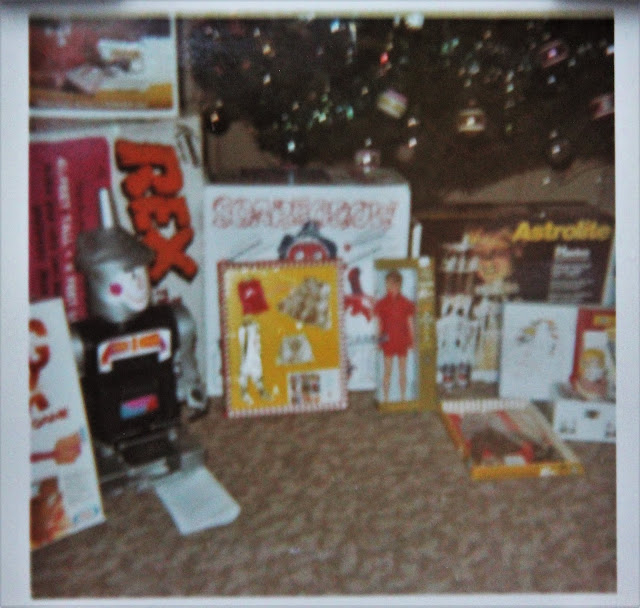 As you can see, Lori also got a Talking Ken doll,and Barbie and Ken clothes. The Ken fashion on the floor next to his box appears to be Rally Gear. The Barbie fashion to the left of Ken is Fab Fur. The robot toy, which Lori remembers as being fun, is the Wizard of Oz Tin Man robot by Remco.


And if you are wondering what the big box is that says 'Rex' across it,well, here it is again. 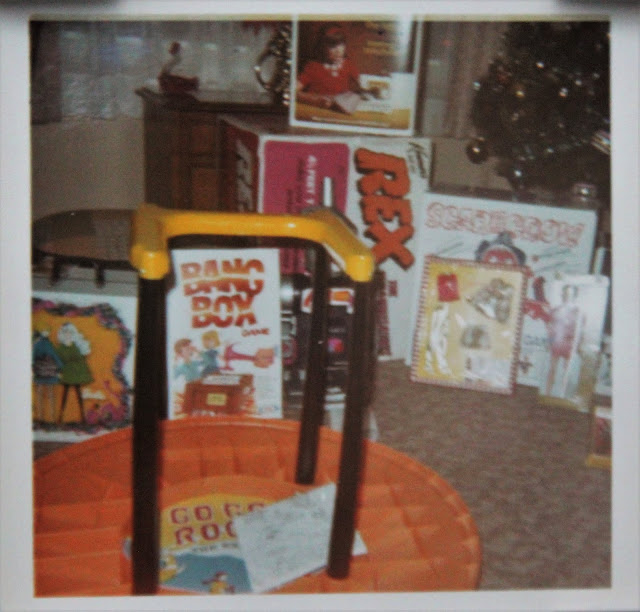 It's the Kenner 'Rex the Tyrannosaurus'. 'Rex' was a  six feet long,4 1/2 feet tall Styrofoam dinosaur. I remember those! I can remember seeing them in ads or catalogs. I think I may even have played with one, but my sister says she remembers no such dinosaur at our house or our cousins houses. She's six years older than I am, so she should remember better than I do. Maybe I just thought they would be fun and wanted one.  The box reads, 'Make your very own prehistoric skeleton with these 30 realistic bones'. Sounds like fun to me!
Looks like Lori also got a toy sewing machine,and a game called Bang Box. Bang Box was made by Ideal,and you can see a video about the game HERE. Basically the box,which was labelled 'high explosives',  was filled with inflated balloons,and plastic nails were 'hammered into the prepunched holes in the box. The last person left when everyone else has popped a balloon,wins. There's also a World of Barbie case to keep that new Barbie and Ken stuff in. The thing in the foreground is a toy called Go Go Rock. 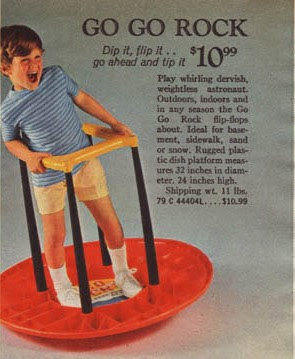 I hadn't heard of that one. It was pictured in a catalog next to the Hoppity Hop, which I had.
I'm sure the Tom Jones album in the picture below was for Norma,Lori's mom. Like he was for my mom, Tom Jones was one of her favourites. There's also a Bingo game and one of those mesh stockings that came full of stuff. I never had one that huge, but we did get those some years. 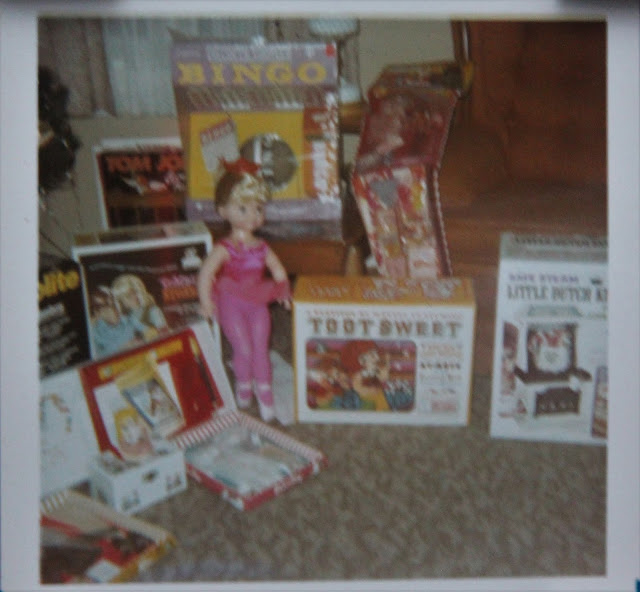 You can see the edge of the Astrolite again,more Barbie clothes,possibly a musical jewelry box, (In between the Barbie clothes boxes. It looks like those ones that had the revolving ballerina inside. I got one of those one year too. Mine had a Pose Doll that snapped on top, and I still have it.) There are a couple of things I can't identify,so if anybody knows what they are, let us know. There's also a Dancerina doll. 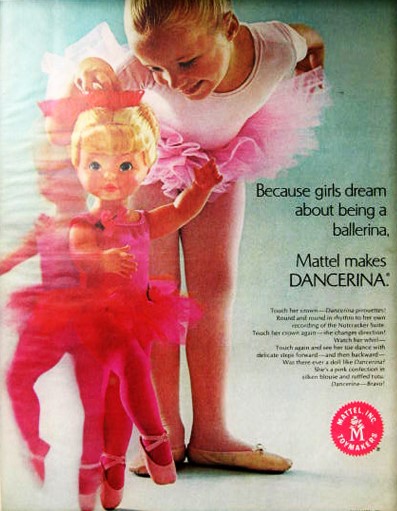 Dancerina, by Mattel, was another one of those dolls I remember other kids having. She spun when her built in crown was pushed down.
There's also a toy called Toot Sweet. That automatically made me think of the sweets Dick Van Dyke's character invented in "Chitty Chitty Bang Bang", and the song that went along with them.
You can watch the scene from the movie HERE.
But did the toy have anything to do with that? Yes! On researching it I found that the toy was based on the movie sweets! In the movie the sweets are a failure because they call dog's to the factory,but I thought they were a pretty cool idea. Apparently so did Mattel. 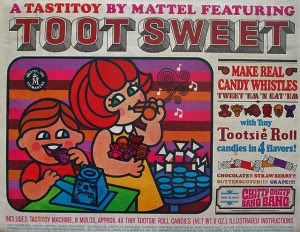 It's described as a 'Tastitoy'. You can watch a video of the toy in use HERE.  Apparently the whistles were made in separate pieces and put together.
The last toy from 1969 is the Little Dutch Kitchen. 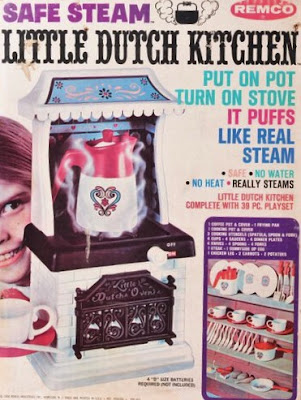 The Little Dutch Kitchen was made by Remco. It came with a set of plastic dishes and cookware, and a pot to 'cook' in, and toy food. The gimmick was the 'real steam' it made while 'cooking'. I'm not sure how that worked, but the kitchen used batteries. I'm guessing there was something used that produced  fake steam or smoke. The box does say 'no heat' though. Hmmm.