The Toys of Christmas Past: Lori's Photos Part Five:Christmas 1972, and Some Other Toys Besides

This is the last post on my friend Lori's old Christmas photos. Since it's the last one,and there are very few things in the Christmas photos, I thought I'd throw in some of Lori's birthday photos and random pictures containing toys.
To start with, here is a photo of Lori with one of her all time favourite toys. It's Marx's Tony the Pony. 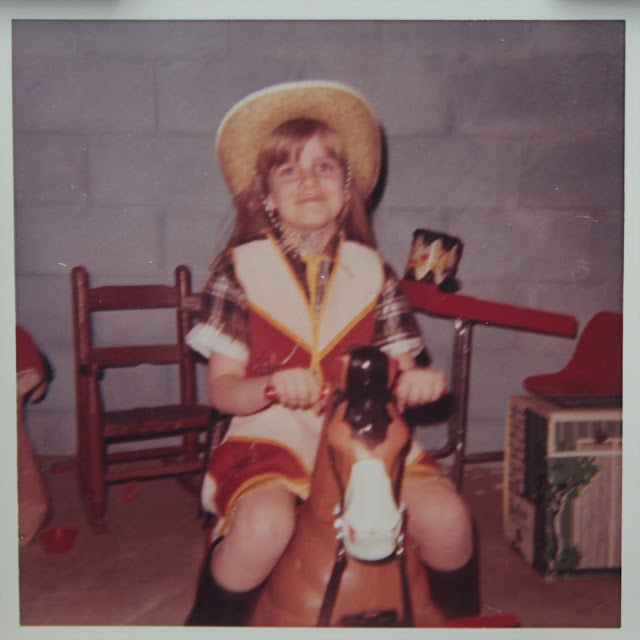 Tony was a ride on toy that ran on one gigantic battery. 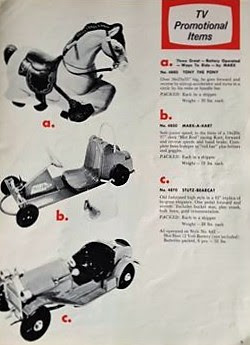 You can check out a video of a little girl riding a very noisy Tony the Pony HERE. Lori remembers her mother had to order a lot of replacement batteries for her Tony!
Lori tells me she loved horses as long as she can remember. In fact, she told me that her first word was 'dog' and her second word was 'horse'. No word on when she said 'doll',but chances are it was much later. In spite of that,and probably greatly influenced by her own love of dolls, Lori's mom, Norma bought her loads of dolls. In the photo above you can see Lori also had the first Barbie Dreamhouse. (On the right.)
I guess the cowgirl outfit went with the love of horses. I had one too. Mine was a hand me down from a cousin, I think. I was always very into costumes and being other people. I loved being characters,so the cowgirl outfit was just my thing. Of course, I also had a trench coat and a real felt fedora. (I have no idea where the hat came from.) 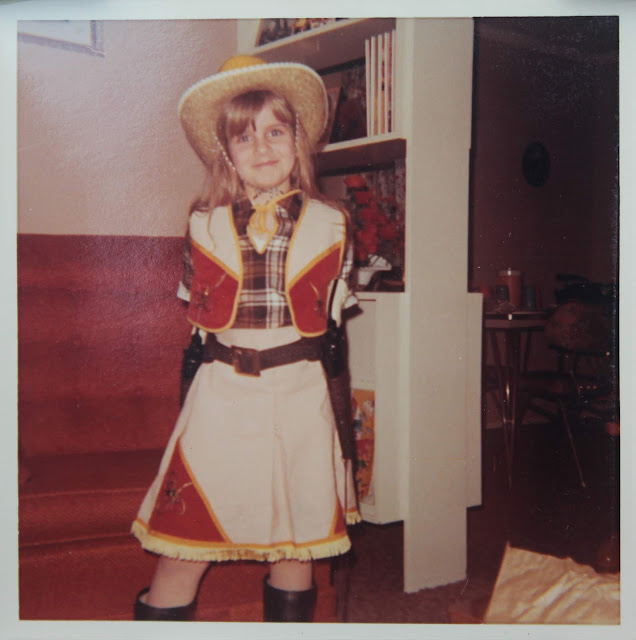 Lori apparently had two cowgirl outfits. And in this photo you can see that she also had a toy German shepherd. 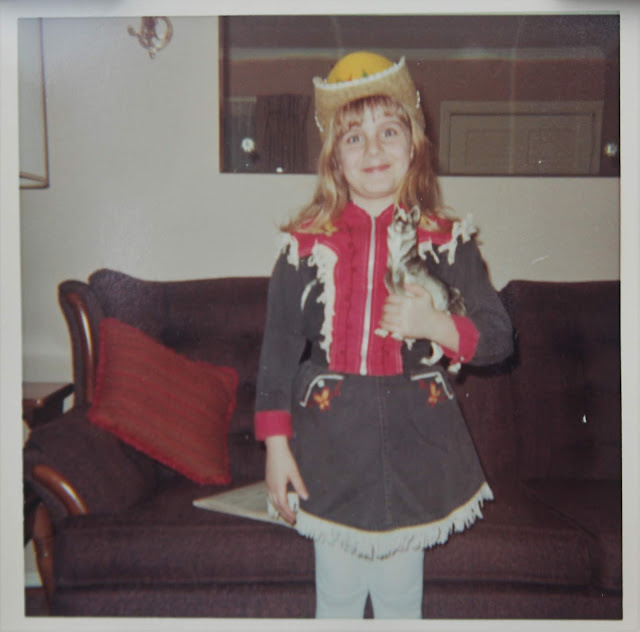 But, as I said, Norma bought Lori dolls too. Here is Lori, dressed very out of character in a sort of hippy outfit,with her Crissy doll. 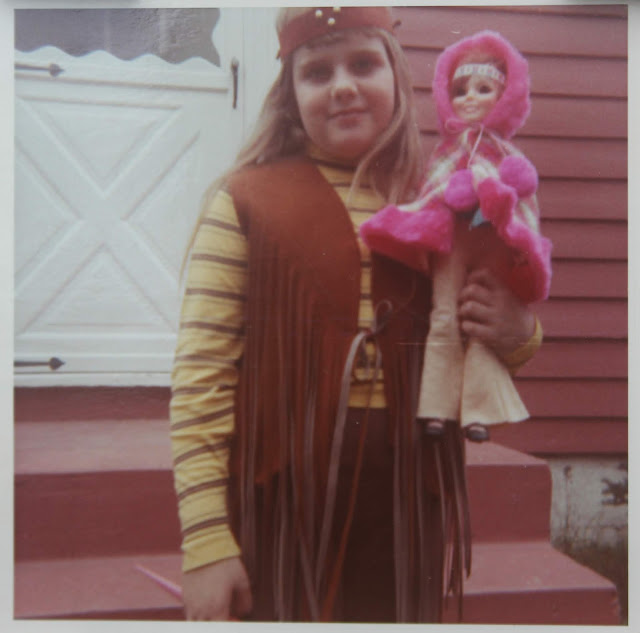 Crissy was a grow hair doll made by Ideal. There was a whole line of Crissy and family dolls. She had a couple of cousins,Cinnamon, (You can see my post on Cinnamon HERE.),and her sister Velvet,and friends like Mia. (You can see my post on Mia HERE.) I once found a whole wall full of shelves full of Crissy and friends dolls at BOTH Goodwill and Salvation Army. You can see a couple of posts about that weirdity HERE, and  HERE.

Lori had a very familiar chimp doll. This guy is Zippy,or one of the many Zippy lookalikes. You still see similar chimp dolls sometimes. I saw one as a prize at a fair just a few years ago. 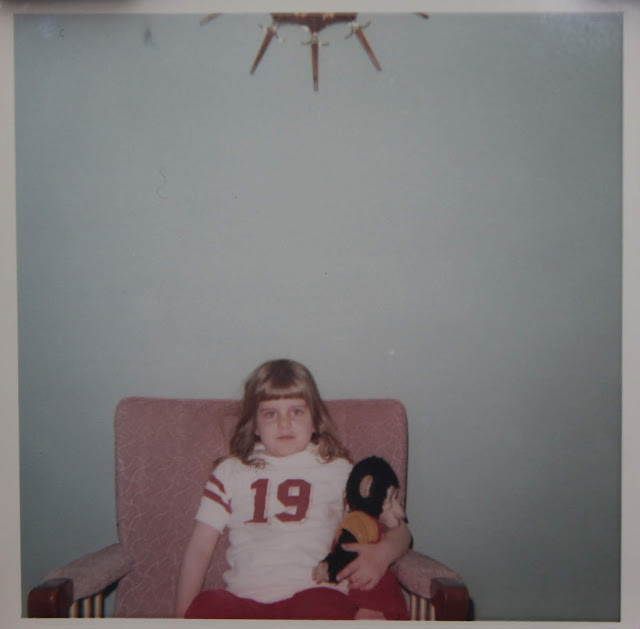 This is one of Lori's birthdays. It's 1968,and the doll is Tippee Toes,made by Mattel. 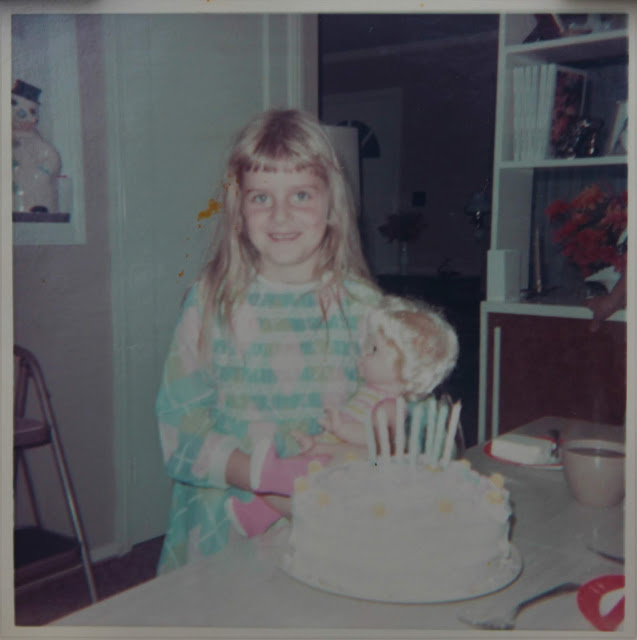 Tippee Toes came with a tricycle and a horse. 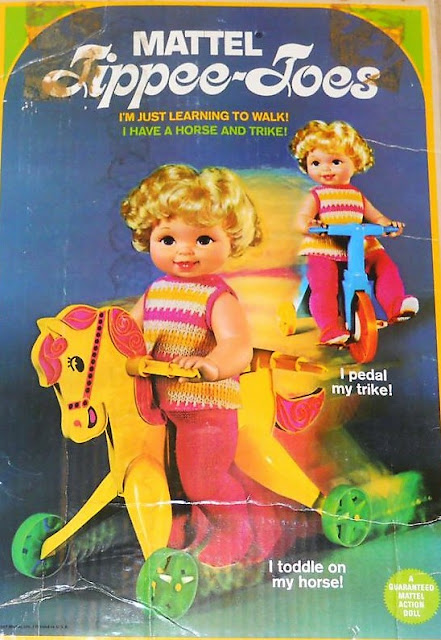 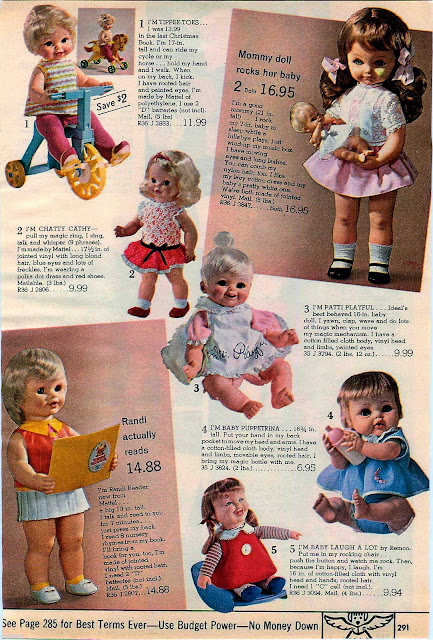 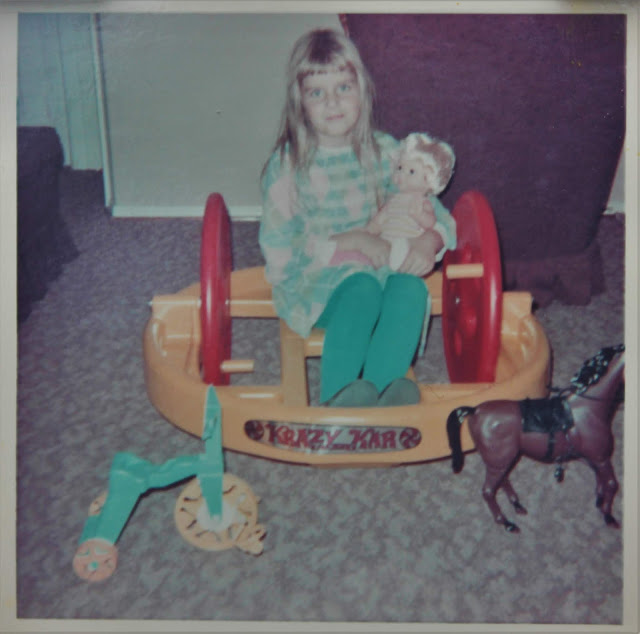 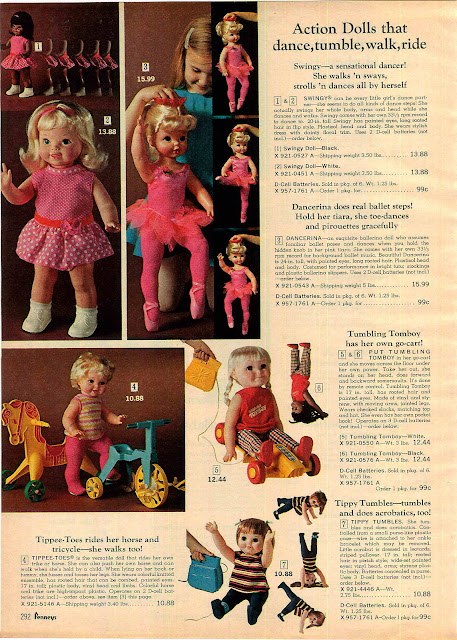 You may remember from one of the previous posts in this series that Lori had Dancerina too. Well guess what: she also had Tumbling Tomboy.

Also in the second Tippee photo above you can see Lori's Krazy Kar,and a horse, of course. The Krazy Kar,made by Marx, was round and was operated by cranking the handles on the big wheels. The wheels could be moved independently and the Kar could be made to go in circles,backwards, and forward. I found one at a yard sale years ago and Ivy LOVED it. She nabbed it right away. I suppose she was the only one of the kids small enough for it at the time anyway, but she did really love it and claimed it for herself. It's in our basement now, waiting for those grandkids I'm never going to have.
In the picture below,it's Lori's birthday in 1969. She got a Super Spirograph. Spirograph is another of Ivy's favourites. I only had a Spirotot, and a Spirofoil,but Ivy has a load of Spirograph toys,including a Spirotot,several different vintage Spirograph sets, a Spirofoil, a Twirlograph and a Magic Designer,the latter two being early Spirograph type toys. She's 19 now, and still likes to Spirograph sometimes. She even took some Spiro pieces and her gel pens to college with her. 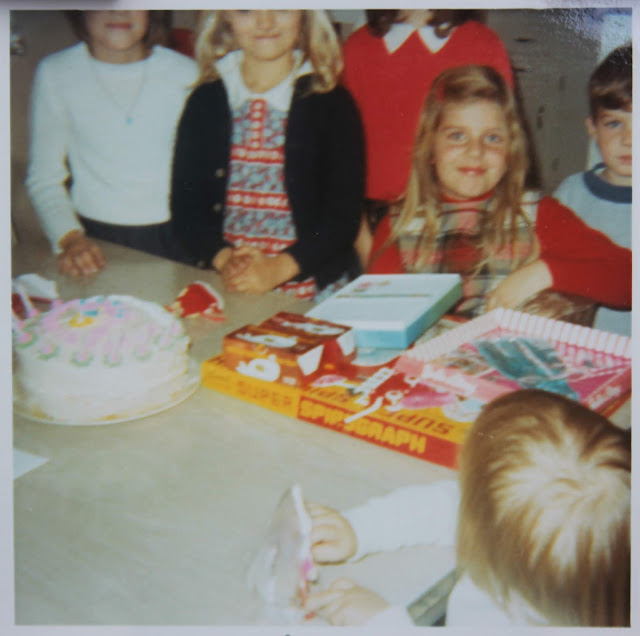 The Barbie fashion in the striped box seems to be Firelights. 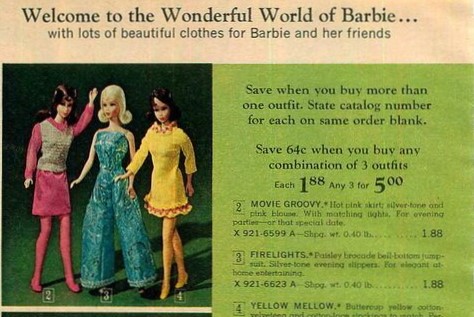 If anybody knows what any of the other things are, please leave a comment.   Now we come to the Christmas pictures. This seems to be the Christmas of 1972. 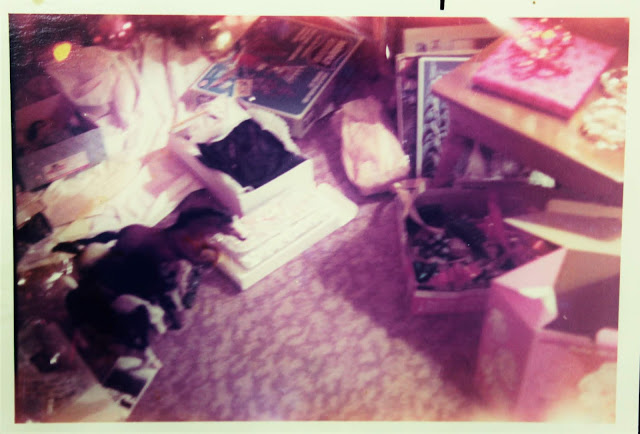 I can't quite make out what the box under the tree is,and there seems to be a styling head at the front right. But look at that row of horses front left. She used to get Breyer horses. I may have even bought her some way back when. She still has a bunch of Breyer horses.
Looks like Lori got a sleeping bag this Christmas,and maybe a pair of ice skates to the left of the sleeping bag? 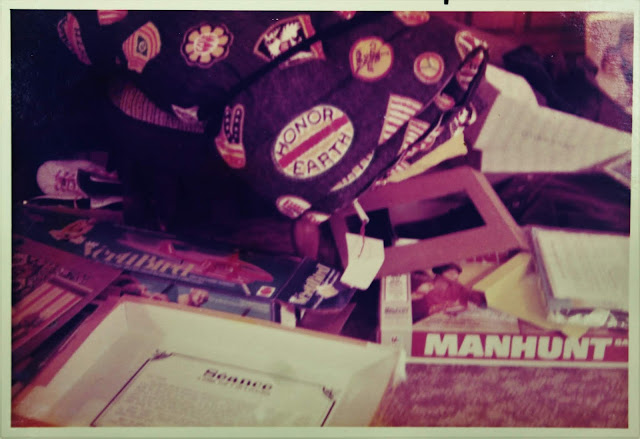 The center of the picture shows something called a Vertibird. Made by Mattel,Vertibird was a tethered electronic helicopter. (A 'vertibird' is a vertical take off and landing aircraft.) You can see a commercial for it HERE. On the right you can see a game called Manhunt. Manhunt was an electronic board game made by Milton Bradley. It's described on the box as 'the electric computer detective game'. You can see a video about how to play the game HERE.
The best thing under the tree, to me, is the game at the front left. It's open and you can see part of the game setting on the left, and the inner lid on the left. It's Seance by Milton Bradley.
Seance looks so cool! I think I would have loved it, and I think doll people can appreciate it. The game didn't have a board. It had more of a setting,or scene. There were cardboard pieces to build a drawing room, with walls, a 'wooden' floor with ornate rug,a parrot cage on a stand,and a set of chairs. For the center of the room there was a large plastic desk with 'carved' legs. The players of the game vied to inherit the most valuable objects from 'Uncle Everett'. There were tiny stock certificates and jewelry and a painting of Aunt Zelda. The gimmick was that the desk contained a little record player! A two sided record played random messages from Uncle Everett, telling the players what they had inherited,or maybe that they had inherited nothing,when a switch on the side of the desk was activated. When all the objects were inherited the record was turned over and Uncle Everett would tell the players the value of their objects or how much they owed in taxes. Whoever ended up the farthest ahead was the winner.
The game is considered a 'sequel' or companion game to Milton Bradley's earlier game, 'Voice of the Mummy', which featured a record player in the mummy's sarcophagus.
You can see a video showing all the game components HERE.You can see and hear the game working HERE. And if you're really interested,you can read a post about the game HERE. It sounds like fun,but it's very expensive to buy these days!
Well, that's it for Lori's photos. I may not be back until after Christmas, but when I do come back,it will be with a review if the newest doll from Maru and Friends. And don't forget to check back New Year's day for the first Doll-A-Day of a whole new year of a different doll every day!
Posted by Tam at 2:14 AM