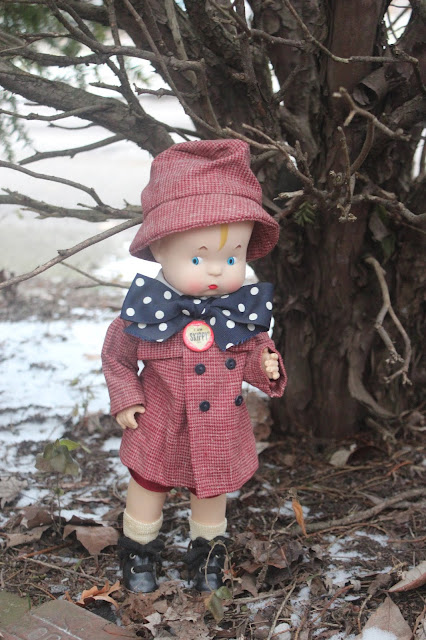 The original Skippy was produced by Effanbee in 1928. 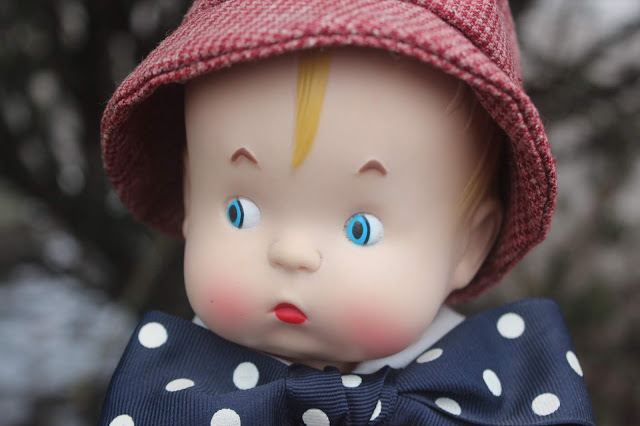 This Skippy is a reproduction. He was made in 1979. 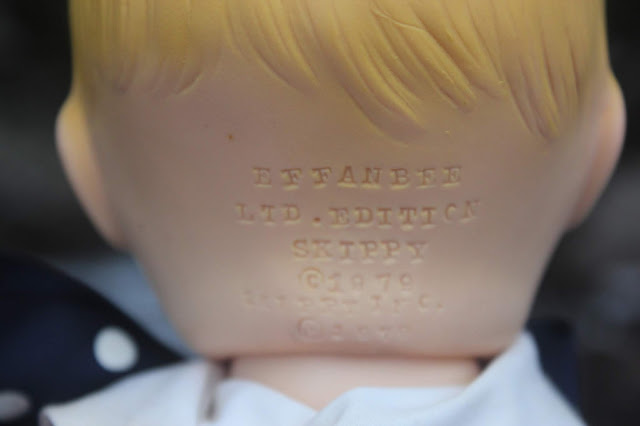 He's an Effanbee Limited Edition.  'The Skippy Company' refers to the copyright of the 'Skippy' character. 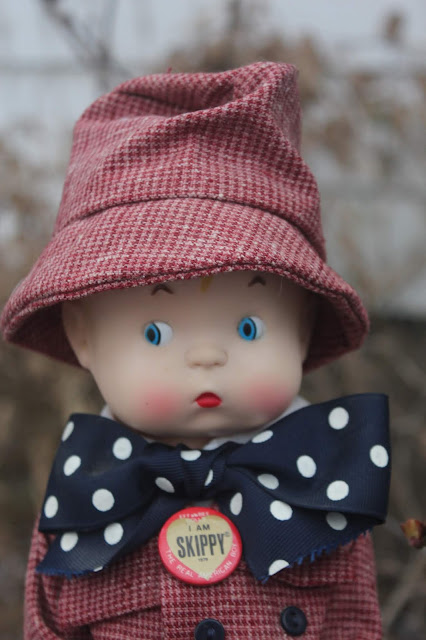 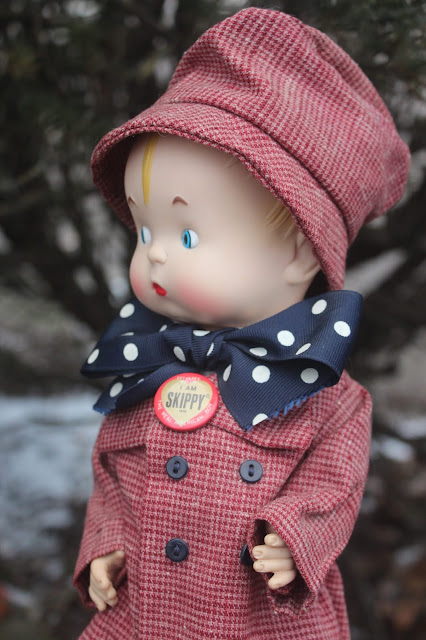 Skippy originated as a cartoon in Life magazine in 1923. Two years later the comic strip began it's run.


Created by Percy L. Crosby,and published from 1923 to 1945, the Skippy comic strip was an influence on Charles Schultz,who later created Peanuts(Charlie Brown and company). 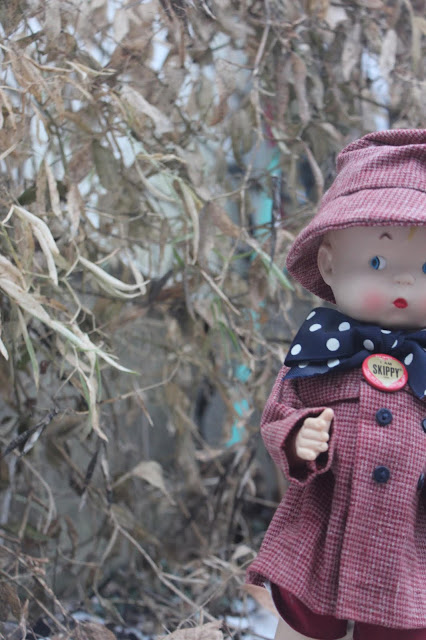 The comic strip, considered a classic,was so popular,it was made into a novel... 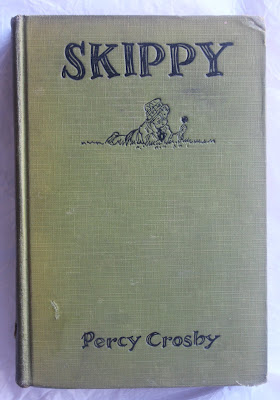 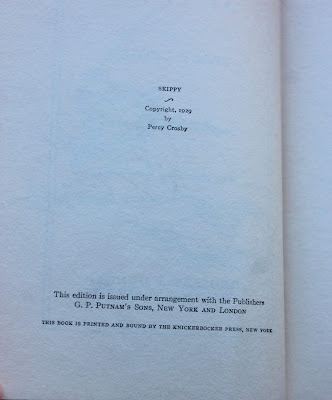 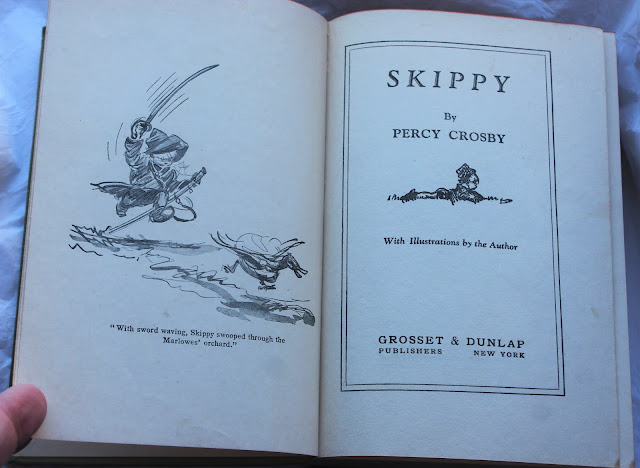 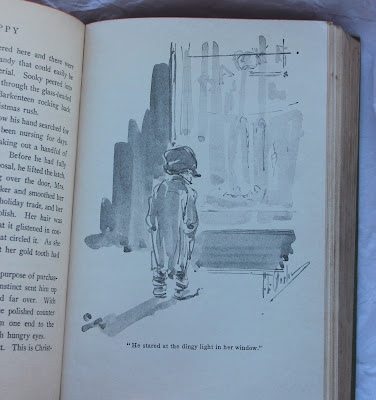 ... a radio show,and a movie,starring Our Gang (Little Rascals) member and later,adult actor,Jackie Cooper. That's where our Oscar connection comes in.

Cooper became, (and still is),the youngest person ever to be nominated for an Academy Award for Best Actor in a leading role,when he was nominated for his role as "Skippy" at the age of nine. He lost to adult actor Lionel Barrymore,and the next year the 'Juvenile' Oscar  was created. It was felt it was unfair to have a child compete with an adult for the award. This lasted until the final Juvenile Oscar was awarded in 1961. To read about Juvenile Oscars,see my Oscar Week post HERE.
There's a famous story about the "Skippy" film. In one scene Cooper was supposed to cry. To get him to produce tears, the director, Norman Taurog, Cooper's own uncle,told Cooper he was going to kill Cooper's dog. (He didn't really.)  He got the tears he wanted, but Cooper hated Taurog forever afterward,and rarely even spoke to him.
Crosby trademarked the Skippy name in 1925,and licensed Skippy to a lot of companies for products. There were Skippy toys,Skippy trading cards,candy bars, clothes, and even bread.

One product that was named after Skippy wasn't licensed though.
**Bear with me here. There is more Skippy doll below, but this is a fascinating story.**
In the 1920's Joseph Rosefield invented a hydrogenation process for peanut butter,which meant the oil would no longer separate from the peanut butter,allowing peanut butter to be sold in vast quantities. Peanut butter became a big commodity. Rosefield originally called his peanut butter Luncheon Brand,but in 1933 he changed the name to Skippy  peanut butter. When he tried to trademark the name, Crosby sued him and won.
Even the label for the peanut butter copied Crosby's 'painted with a brush' lettering style and the fence painting idea which figured prominently in the comic strip.

But Rosefield ignored the court's ruling and continued to use the Skippy name and logo. For some reason Crosby didn't follow up with his opposition.
Crosby began to be preoccupied with politics. He was very opposed to Roosevelt and even self published pro-communist books. His politics crept into his comic strip. His stance was unpopular with the readers of the comic, and by 1945 his contract with the newspapers had expired and was not renewed. That year his trademark registration also expired.
By 1934 Crosby was already showing signs of paranoia,insisting he was being followed. In 1936 Crosby and Skippy Inc, were investigated by the IRS,(supposedly tipped off by Rosefield's lawyers), and put under a $47,000 lien. Crosby had to sell his self publishing company to pay it.
Crosby's wife left him in 1939,taking with her their four children,who Crosby would never see again. By 1940 Crosby remarried, but was drinking heavily.
Crosby attempted legal action against Rosefield again in 1944,serving him with a Cease and Desist order. In retaliation Rosefield's lawyer alerted the IRS again. Crosby received another lien,this time for $43,000 in back taxes. All of Crosby's assets were frozen by the IRS in 1946.
In 1947,believing his phone was tapped and his mail was being tampered with, Crosby attempted suicide. He was admitted to Bellvue mental hospital the following year. Declared mentally incompetent in 1949,Crosby was admitted to King's Park Psychiatric Center. He would never leave. Crosby died in 1964.
Rosefield filed for a trademark on 'Skippy' five days after Crosby was admitted to Bellvue,and got it.
Crosby's ex'wife had hired a lawyer,Rose Stein, to represent his interests in the case,a lawyer which,it was later discovered, was working secretly for Rosefield. Stein hid paperwork,claiming it 'blew out of a window',and the records of the original 1934 court case against Rosefield were 'accidentally destroyed'. The day Stein was to sign over all rights to 'Skippy' to Corn Products Corporation,(who now owned Skippy Peanut Butter.), Crosby died. That stopped her actions at least.
Crosby's daughter,Joan Crosby Tibbetts.was appointed guardian of Crosby's estate in 1965,and has been fighting to stop Skippy peanut butter from using the name ever since. (Joan wasn't even aware her father had been institutionalized until his death, because her mother didn't allow mention of Crosby.) You can read the full story of Joan Crosby Tibbett's legal battles on the offical Skippy, (the character), website HERE. You can also read the full story of Skippy vs. Skippy HERE. There's an even more detailed account HERE. It's a very tragic story.As Ken put it when I finished reading him the story,"It almost makes you want to stop buying Skippy peanut butter." Luckily I prefer Jif anyway!
The doll 'Skippy' was promoted as the boyfriend of Effanbee's popular Patsy doll. 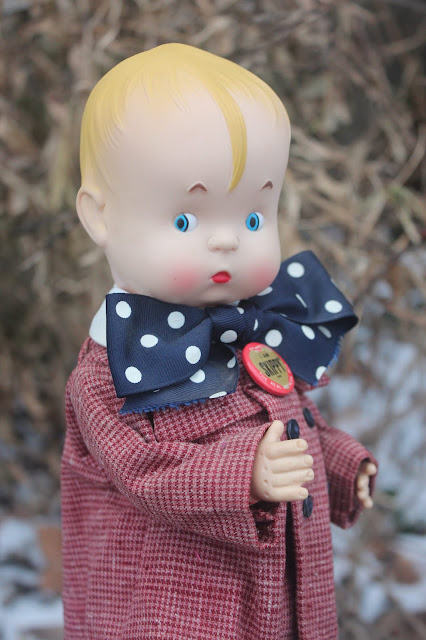 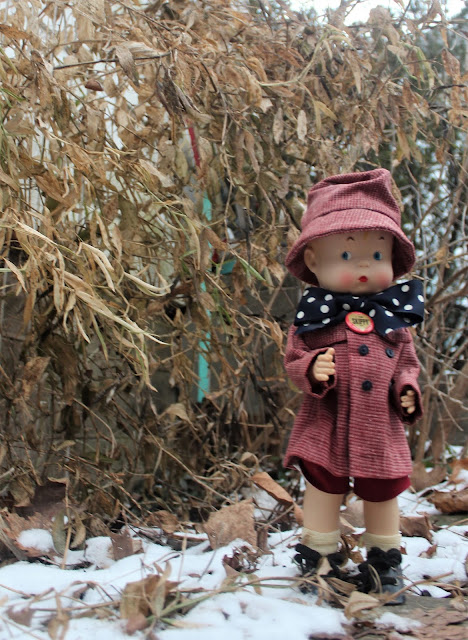 The original Skippy would have been composition. This Skippy reproduction is vinyl. 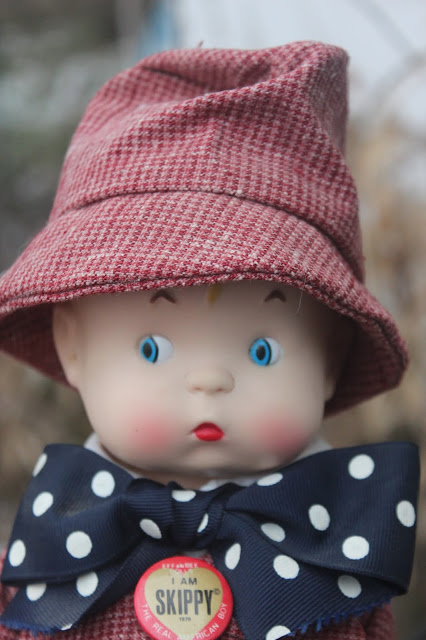 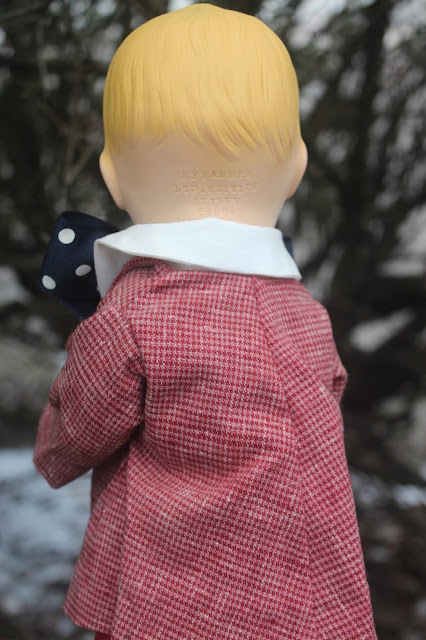 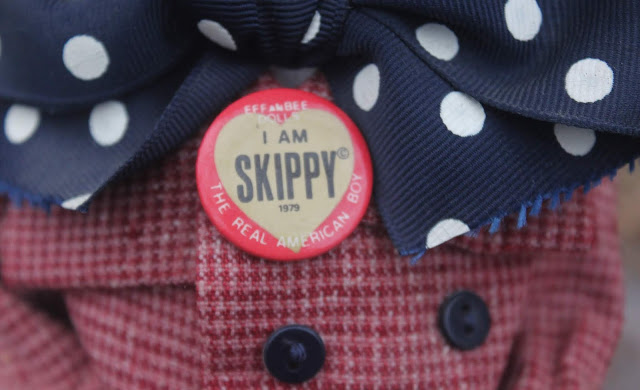 His outfit is made from the same fabric as Autumn from the Effanbee Four Seasons Collection.

And of course, there's his big bow tie. 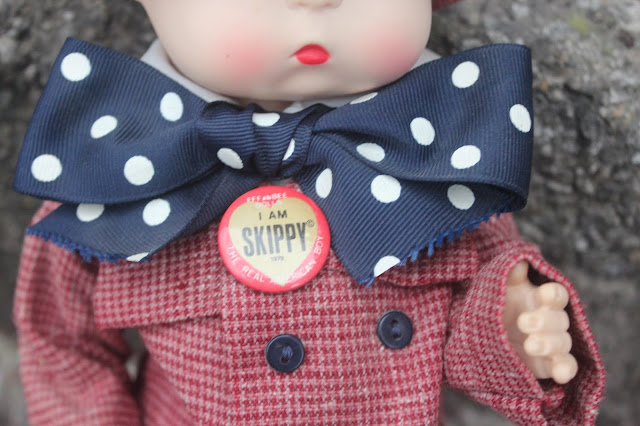 Skippy is also wearing a white shirt,and a pair of short overalls. 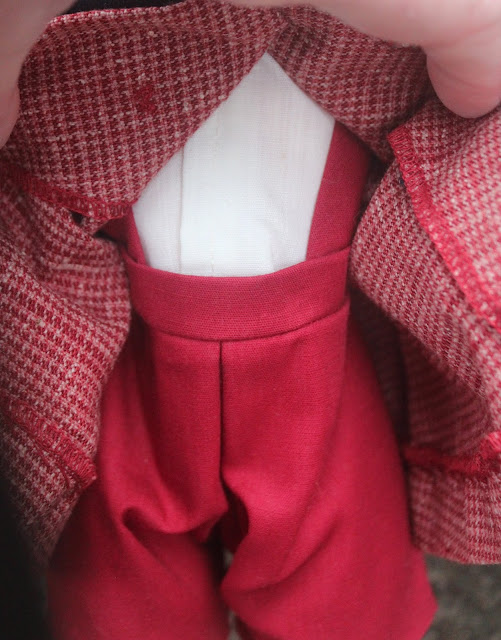 His coat is removable,but his pin hasn't been taken off before, and I didn't want to mess him up.
He also has short white socks and a pair of shiny black shoes. 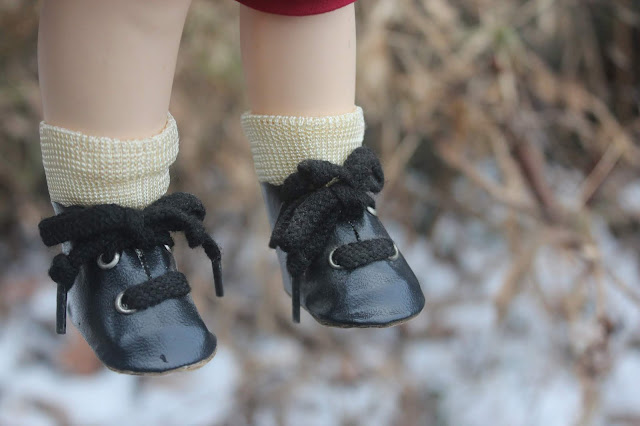 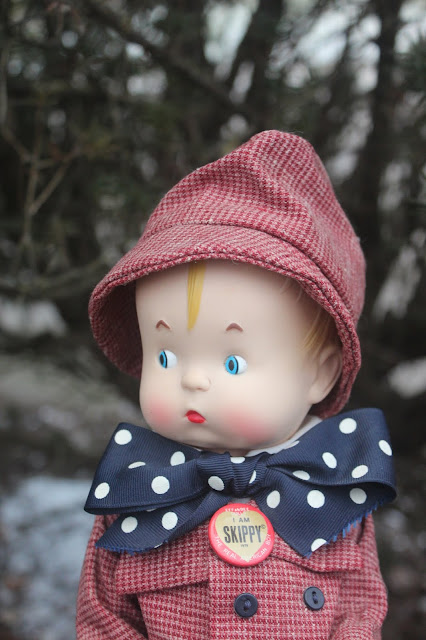 That's all for today. Check back tomorrow for another Oscar Week doll.
Posted by Tam at 2:05 PM