Does anybody remember today's doll? 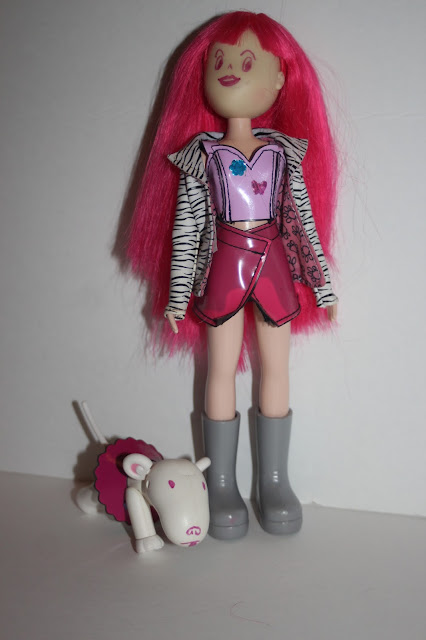 She's What's Her Face by Mattel. 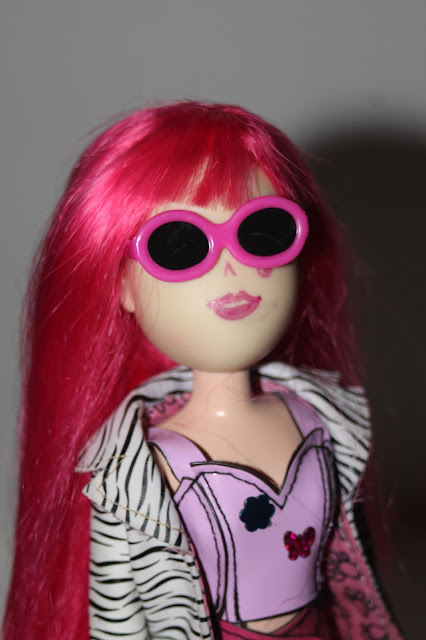 What's Her Face's gimmick was that she came without a permanent face or hair...

...but she came with wigs and markers and stampers. 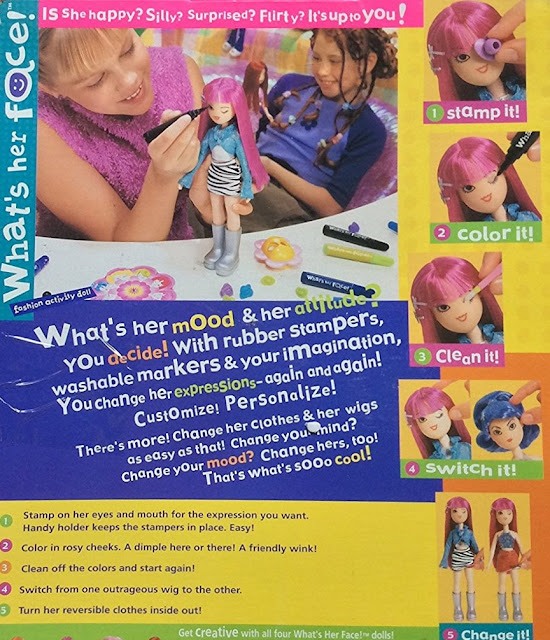 Kids could use the markers to colour the stampers and stamp on her eyes, and mouth... 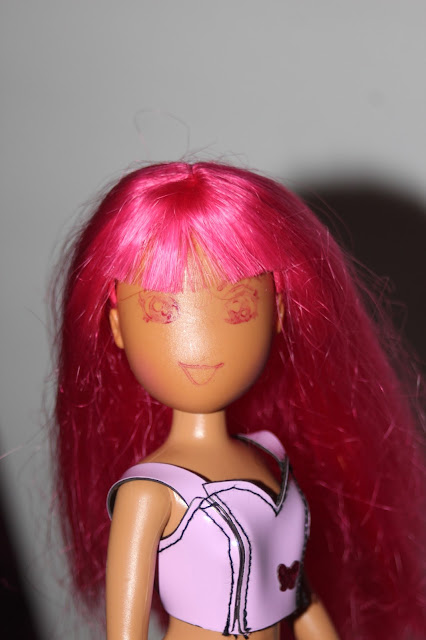 ...or draw her features on with the markers.


The creepiest thing,(even creepier than a doll with no face.),was a face mask with shaped holes that allowed kids to keep the stampers in place and not get What's Her Face's eyes all googly by stamping freehand. 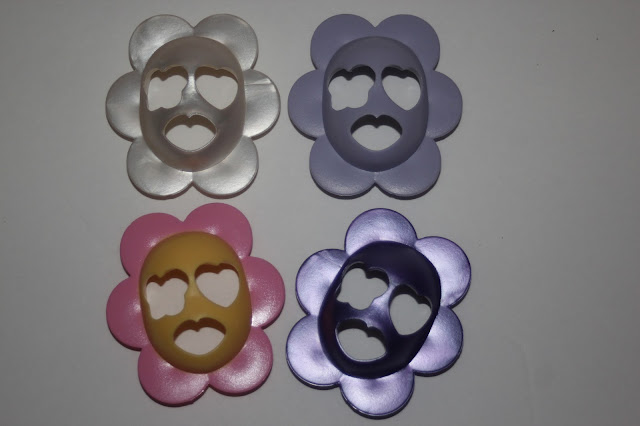 Of course, that could still happen...

It's hard to push those stampers flat to the face! The face is curved and pretty slippery. I guess that's why the mask is a good idea,but they're still kind of hard to stamp.

It didn't help that my markers, although fresh from the package, are old, and the green one hardly writes. That's why these girls ended up with pink eyes!
There was also a little cardboard wheel provided, which showed how the combinations of mouths and eyes would look together.

The face could then be cleaned off,with water and a sponge, and replaced with another one. This could be done over and over again.


There were various coloured markers, but when we played with Emma's What's Her Face,I was always frustrated that there was no brown for the eyes!
The wigs,which are smaller than Liv wigs,had Velcro inside the top,which attached to the Velcro on the top of the doll's head. 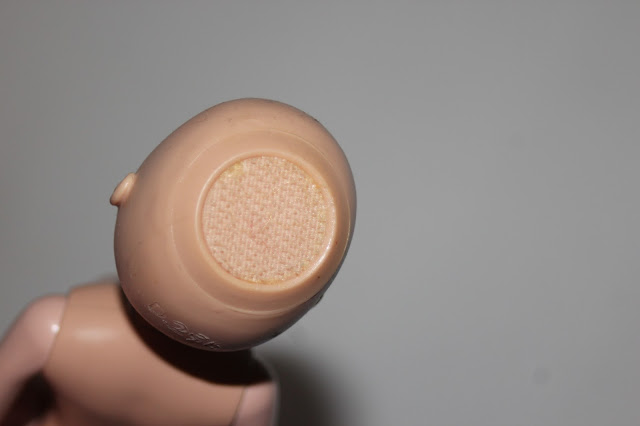 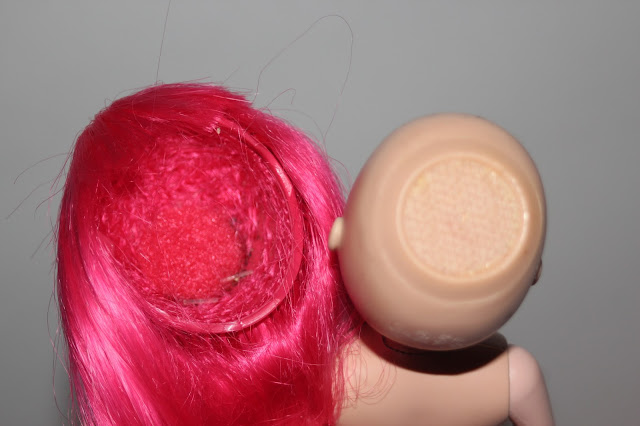 The wigs came in several bright colours,like this pink one, as well as red,yellow,purple,orange,blue, and if I remember correctly,green,and even some two tone wigs.
The clothes were always pretty wild,and they were reversible.These particular clothes are magnetic,and there are magnetic shapes to decorate them. 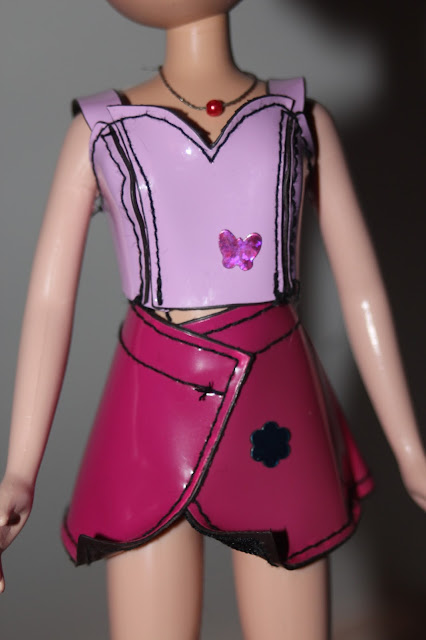 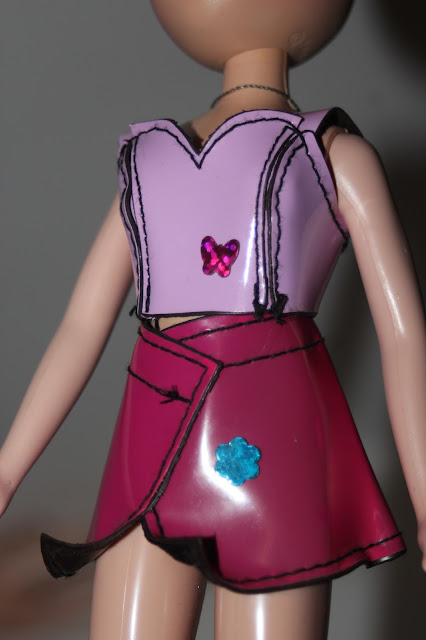 One could have dressed What's Her Face in Wee Three Friends clothes, because they used the same 9 1/2" tall  body. 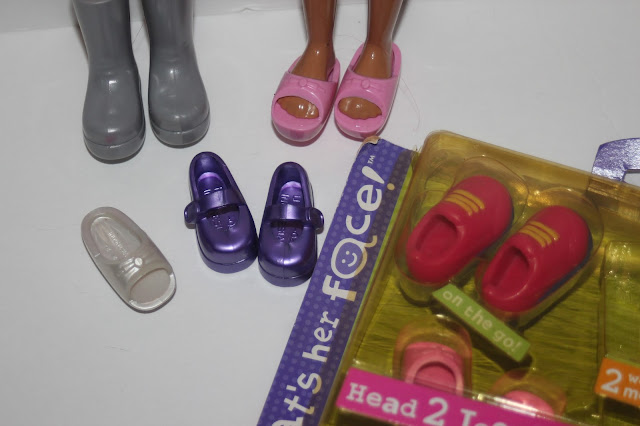 With all of that changeable stuff, there was loads of play in a What's Her Face doll.
During What's Her Face's run there were several dolls produced,as well as accessory sets... 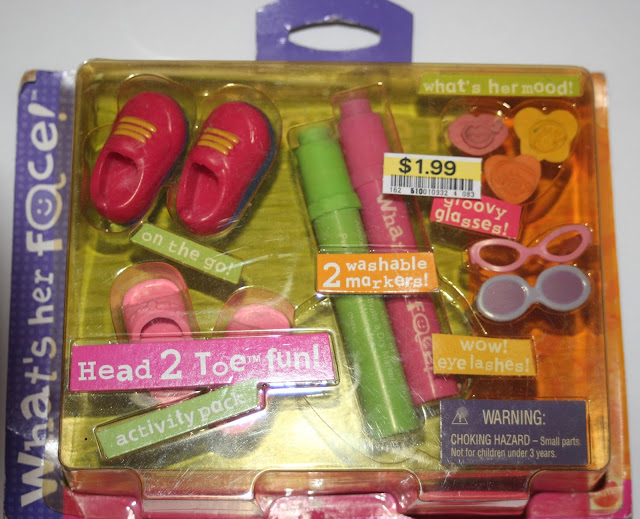 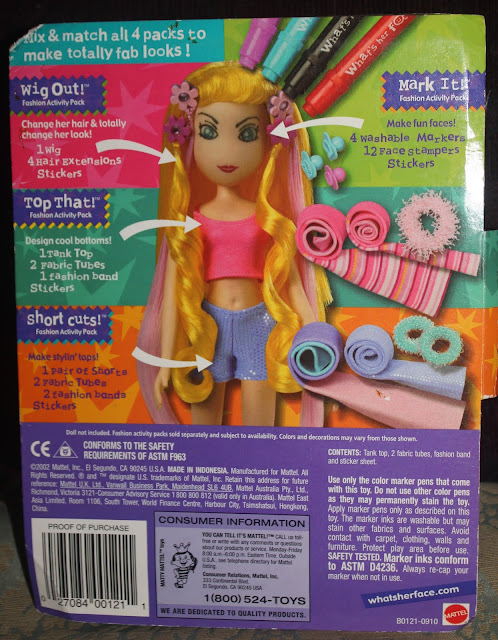 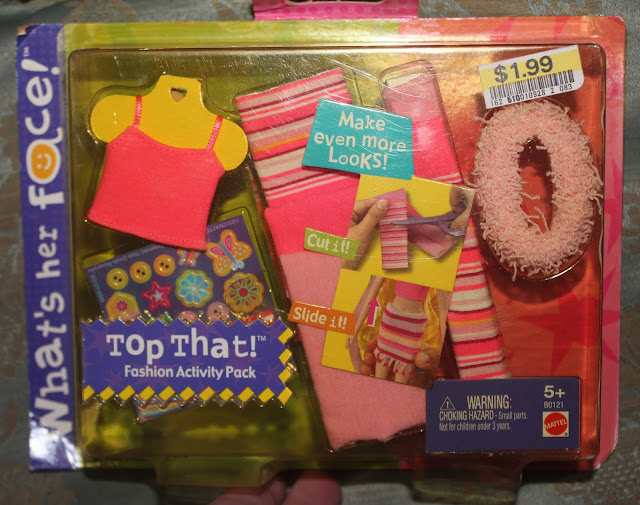 ...and even Whatever Pet,an animal that came with stampers and several different sets of ears and tails. 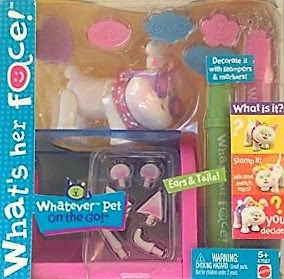 There were two or three different basic animals. One had a basic cat shape. 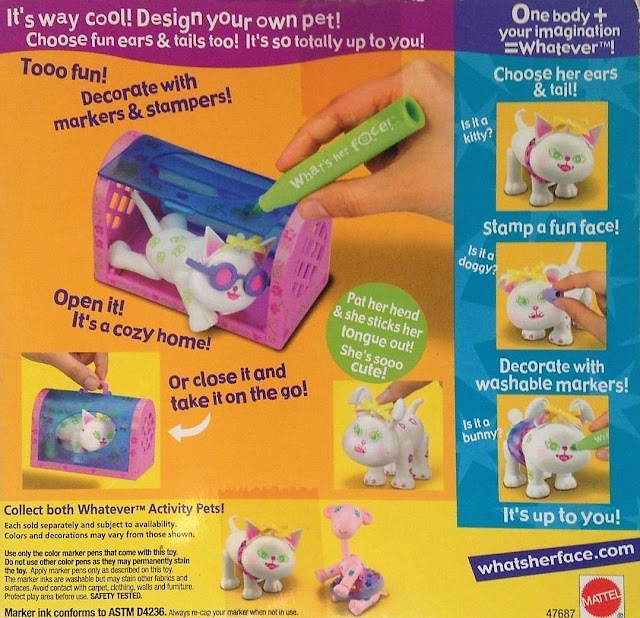 The one I have has a basic dog shape, but a neck that extends as the tail shortens.(He's pictured above right.) He has two sets of holes in his head and came with three sets of ears. 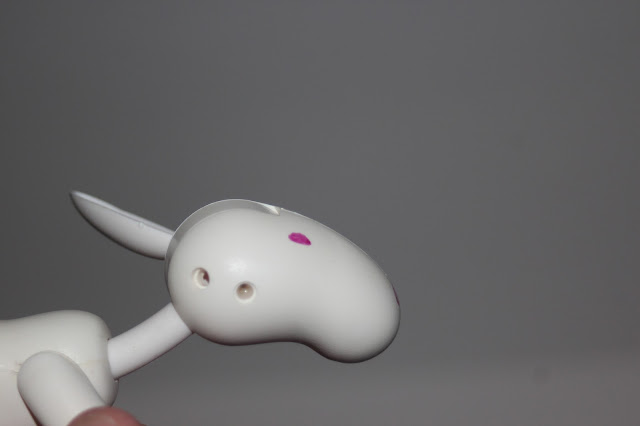 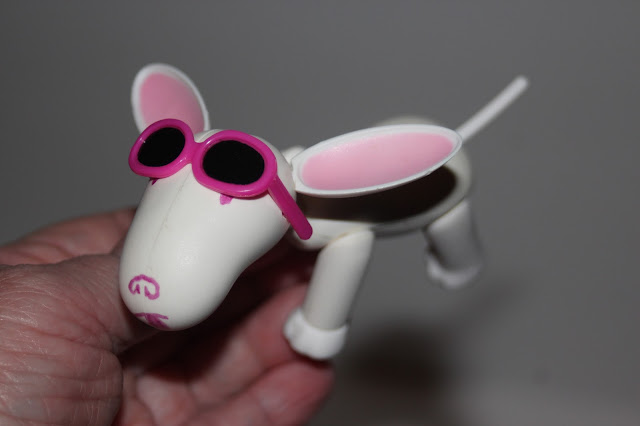 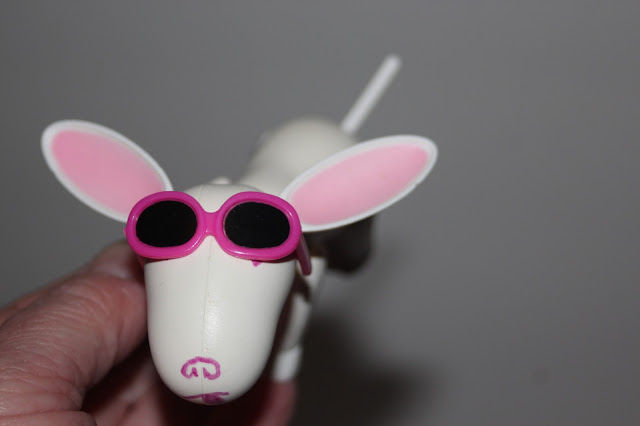 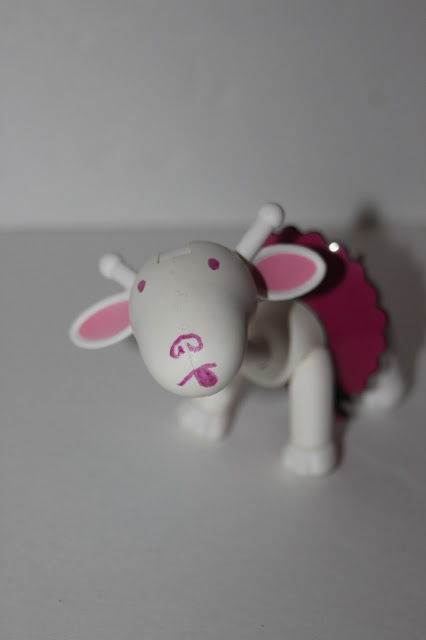 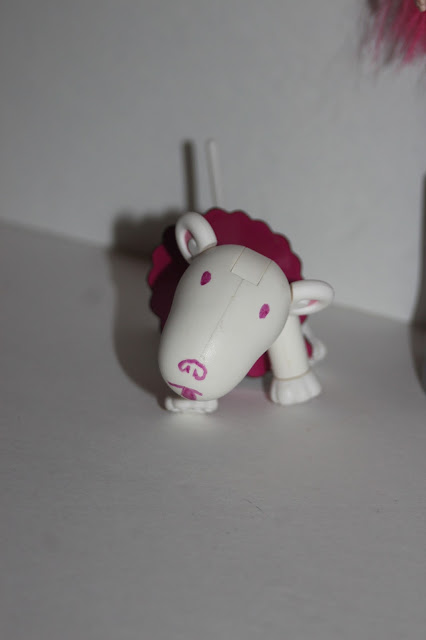 You can watch the commercial for What's Her Face HERE.
Come back tomorrow for another doll.
Posted by Tam at 1:16 AM