I've been home from Georgia for a while, but I've just been catching up on everything and suffering a bad shoulder. As for my trip, which you may remember was to celebrate my best friend Lori's 60th birthday with her, Tammy World joined me. 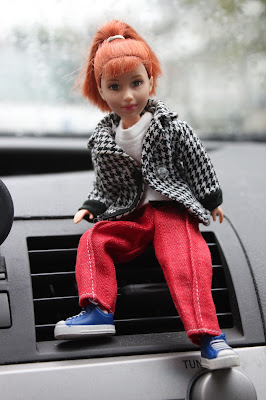 On the way I stopped at a rest stop to go to the bathroom. That's where I saw this.

It's kind of a dumb slogan. Find what here? If you mean Ohio, well duh.

I spotted Super Pig on the way. I think it was around Cincinnati. 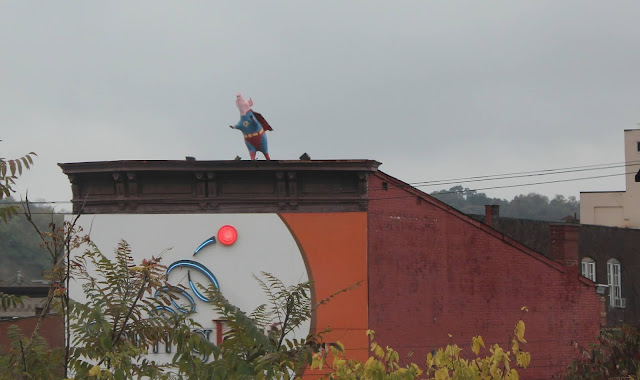 I  stopped several times to try to get Lori some KFC chicken livers, which, weirdly enough, weren't available in Georgia when she moved there. but were still available up here in some places. Well guess what: they aren't apparently available anywhere any more. Other than that, I stopped a couple of times to go to the bathroom, a couple of times to get gas, and once to get something to eat and take a nap. I also lost about an hour when I missed my exit and spent way too long trying to work my way around to the road I should have been on. I finally arrived at Lori's somewhere between 4 and 4:30 in the morning. By then it was already her birthday, but we saved presents until we got up, and went to bed.

The next day we ate out at Lori's favourite restaurant for her birthday. I had tried to get some whipping cream on the way to her house the day before, but I had waited until late because I didn't want to keep it unrefrigerated very long. I ended up waiting too late, and everything was closed except gas stations, and they don't carry whipping cream. Lori wanted to go do her grocery shopping ON HER BIRTHDAY, which worked out well because I was able to get some whipping cream. Why did I need it? Before leaving Ohio I had baked Lori a birthday cake. It's a great cake, (It's actually a Chocolate Midnight Torte.), but it has chocolate whipped cream in the middle and a chocolate glaze. That makes it super delicious, but it also makes refrigeration necessary. So I didn't finish the cake, but instead made up containers of the ingredients for the filling and glaze, (except that whipping cream), and took them with me. (Luckily I remembered the cake too!) So after we got back from the store, Lori went to take a shower, and I finished putting her cake together.

While I was in Georgia we hung out, talked, laughed, ate, went to the mall, went to several antique stores, and watched spooky TV. We talk on the phone sometimes, but being together is different. Ivy always wants to know why we have to laugh so much. Well we don't have to, but I'm glad we do. What's wrong with laughing?

While we were out one day we passed this place again, which I found amusing the last time I was there, but didn't get a picture of.

We also came across a place that did prosthetics, whose sign featured a pirate with a hook and a wooden leg. We couldn't decide if we thought it was the most offensive thing ever, or if we would go there if we needed a prosthetic, because we loved their sense of humour.
Tammy World wanted to show you where she'd been.

And some of the local landmarks. 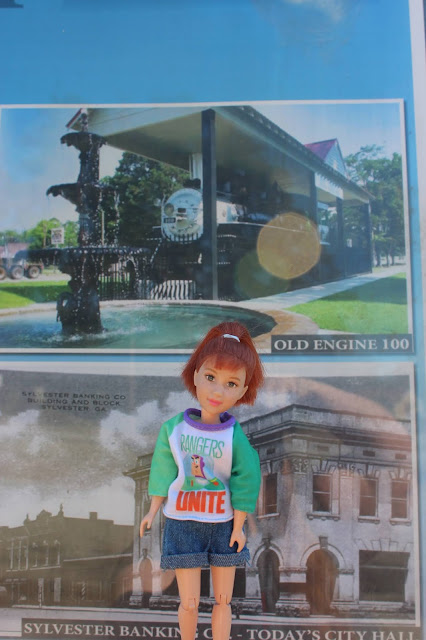 I also had a job to do while I was there in the sunshine. I ran out and did it one day while Lori was cleaning up her horses and having a couple of short rides. She has two horses, and I hurried back before she was done. 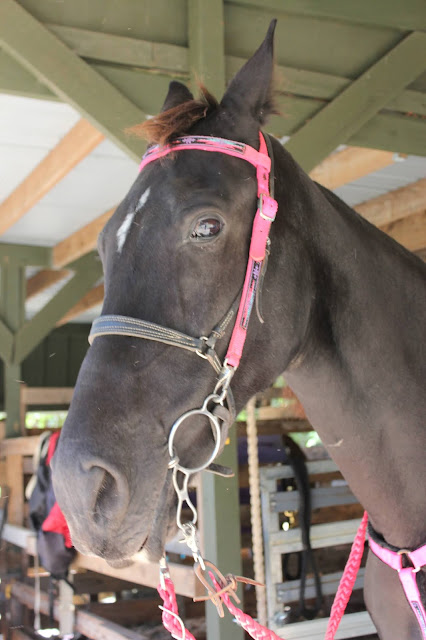 Here's a preview of the work I went to do while she was working with the horses. 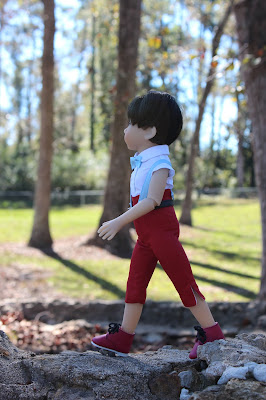 And we spent some time with Lori's goats, who were too cute to leave out. 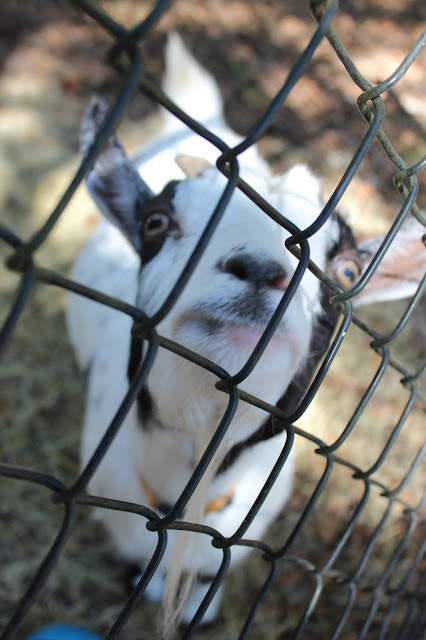 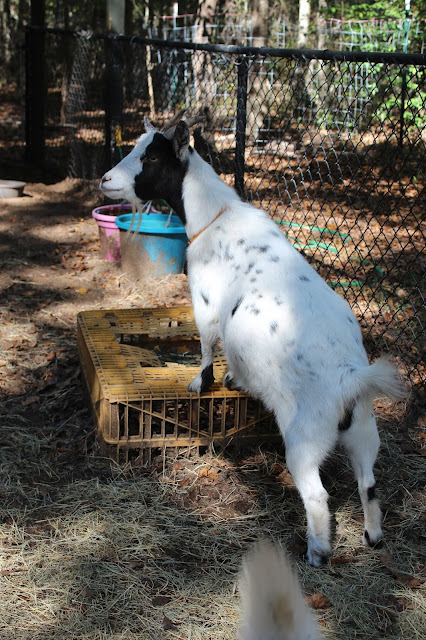 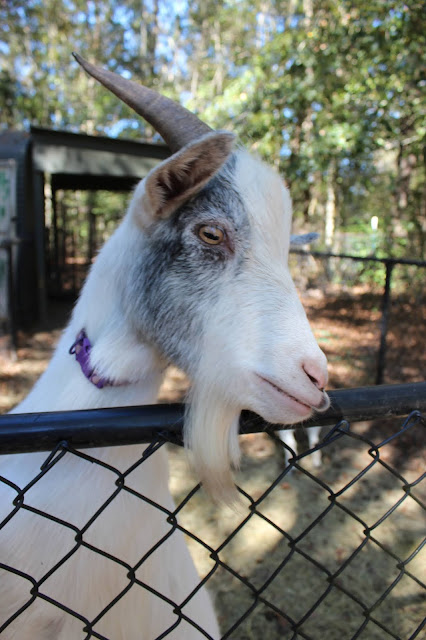 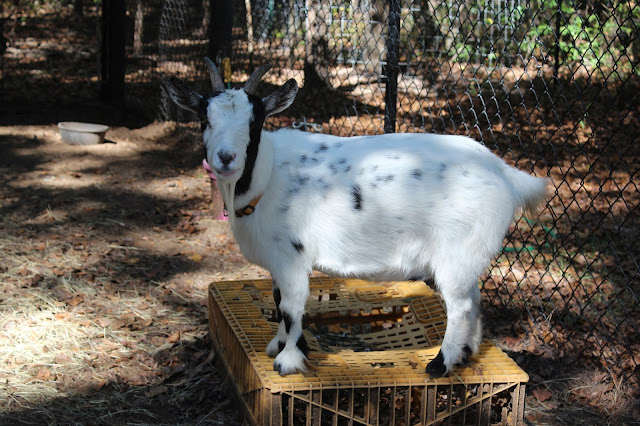 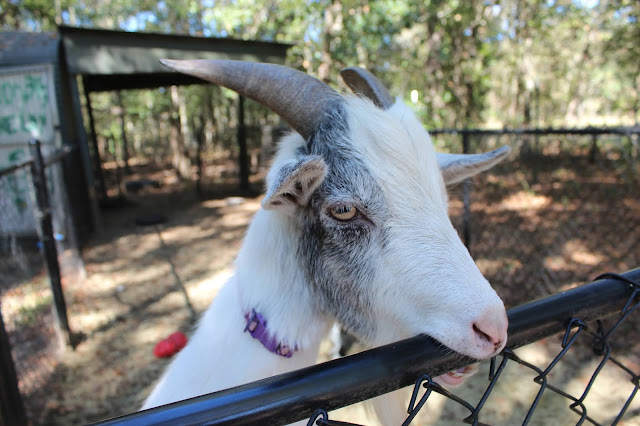 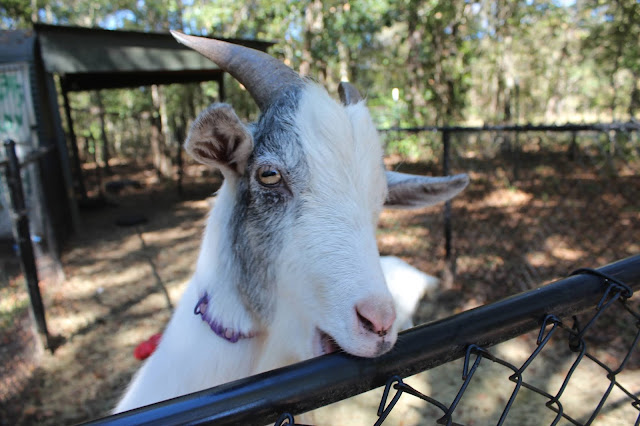 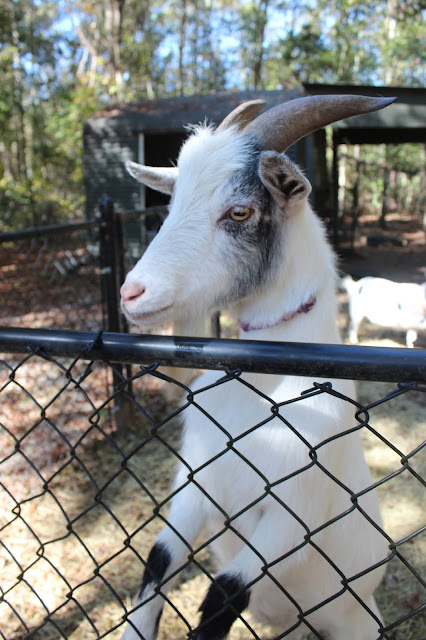 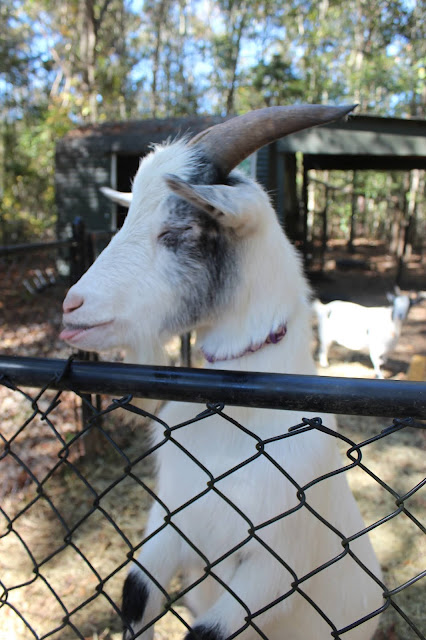 There was still cotton in some of the fields. 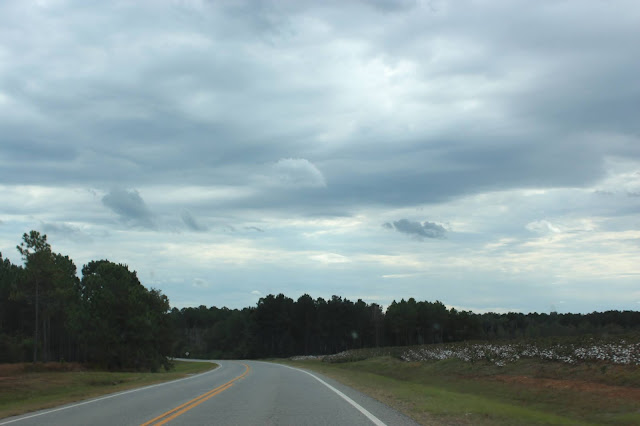 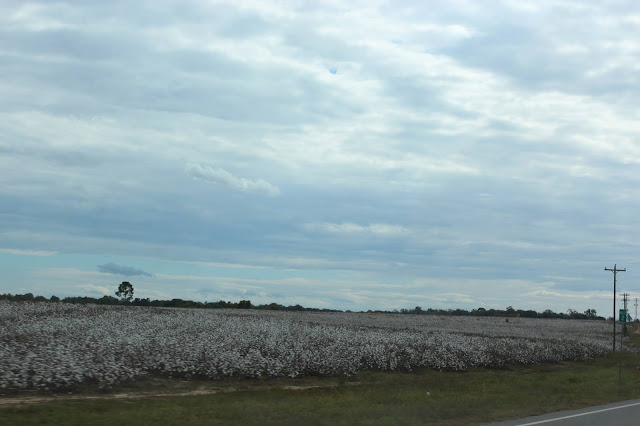 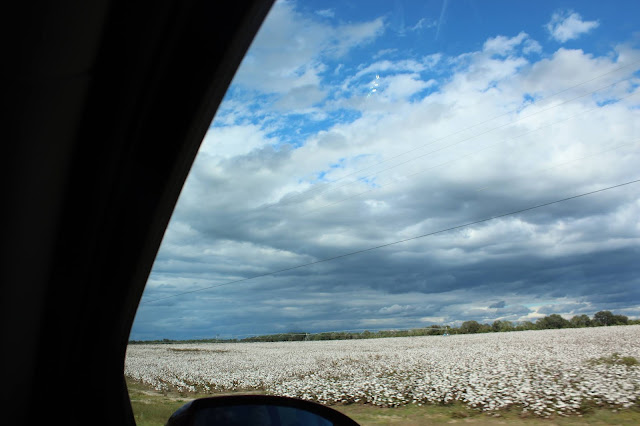 You can see how overcast it was in this picture I took of the very tall, very straight pine trees. 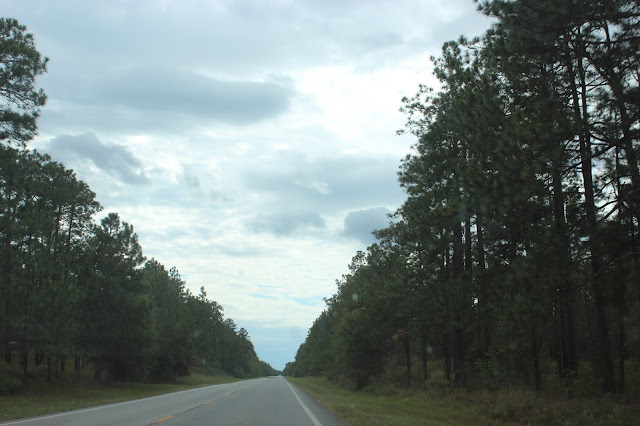 But there were blue skies too...and this was on the same day! 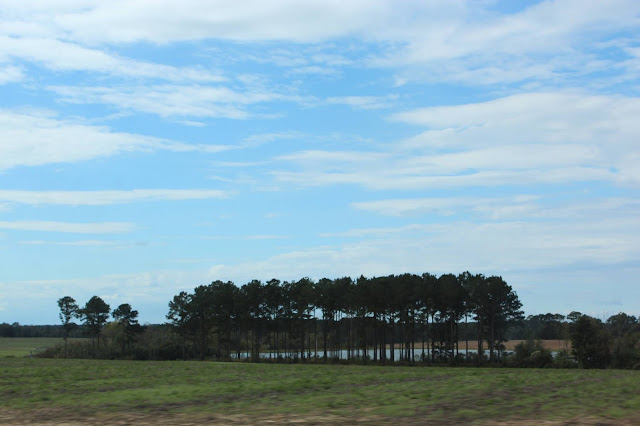 These two pictures were taken a minute apart! 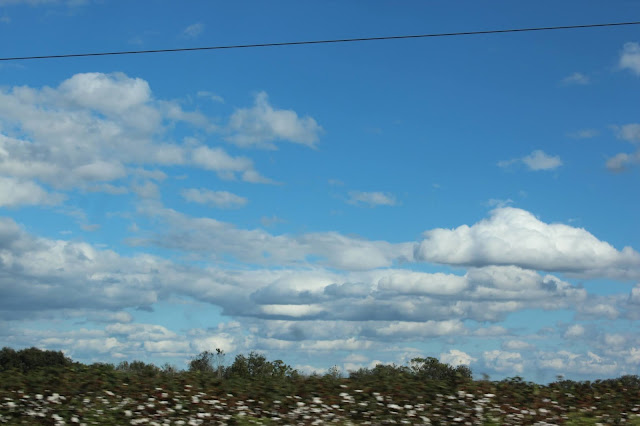 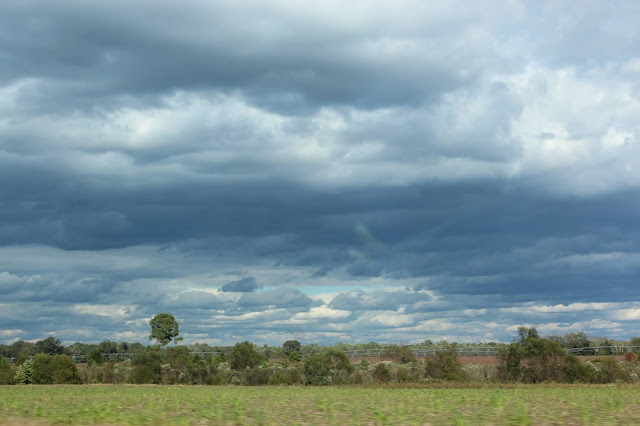 I brought some Chess Squares, (a Southern dessert), home last year and everybody loved them, so I was going to buy some for everybody this time. I was disappointed to find that Carroll's Meats, the store where I bought my chess squares the last time I was there, no longer sells them! (I talked to Ken on the phone, and he asked me if I had gotten my 'chess pieces'.)  On the other hand, Lori and I went to an antique store I had gone to the last time, and a huge print of 1860's ladies in big dresses that I had considered buying last year was still there. Last year it didn't have a price on it, and it still didn't. I actually asked this time, but the store owner started out way too high for me. But I talked her down on the price, and this year I brought it home.

The day before I went home we went to a nearby town, (Where we saw signs for a guy running for something in town, who was named Ken Turnipseed. Sounds like a character in a kid's book), where we went to an antique store, and ate at a place called Three Crazy Bakers.

The food was good, but I had the smallest piece of quiche known to Man, (or woman). I liked that they had pictures of themselves in famous places all over the world, with their backs to the camera, wearing shirts with their business logo on them. Cool way to promote your business. You never know when someone from Rome, Italy or Agra, India is going to see you and say 'Hey. That sounds like a great place to eat. Let's hike it over to that tiny town in Georgia and get lunch.' I'm being funny, (supposedly). It is cool.

I think I've mentioned before that Ken loves corn, but can never find yellow corn any more. On my agenda was looking for yellow corn, since corn season has passed in Ohio. I kept putting it off so the corn, if I found any, wasn't old before I went home. The night before I was to come home, we stopped at the grocery store, and right at the entrance was a bin of corn. It was yellow! Lori thought I was crazy when I started filling bags with ears. She couldn't believe I was getting so much. "How much corn can he eat?!" "You'd be surprised." As we did the rest of our shopping I kept saying, "I should get more corn." I think she thought I was kidding at first. I said, "You think I'm crazy, but I should get more." I did go back for more. In the end I had 39 ears. She thought there was no way he could eat all those before they went bad, and he wasn't sure either when I brought them home. But I know Ken. As of this writing it's still good and he only has one ear left. I only consented to eat two because Ken insisted. I don't like to eat it when he likes it so much more than I do, and can never find it.

I left on the Saturday morning before Halloween. This magical looking driveway was basically around the corner from Lori's. I kept meaning to photograph it, so I did it at the last moment, stopping in the road to do so. Don't worry. I was keeping an eye on the empty road. Finally somebody came behind me, and I drove on. My camera battery had died any way! 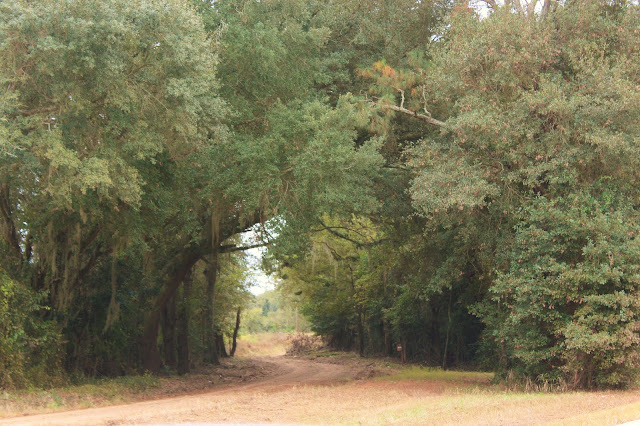 I had that giant picture standing behind the back seat because it didn't fit in the trunk. I had a cooler with 39 ears of corn in it. I had set up the front seat with everything I would need on the trip: my packed lunch, which I had bought the day before when Lori and I ate at Three Crazy Bakers, my snacks,(from an Asian grocery store in Ohio), some water, my sweater, for covering up when nap time came, and my pillow, also for nap time, and wipes, for cleaning, of course, (My mask, and hand sanitizer were both in the storage 'hole' in the dashboard.)

As I headed home I passed signs on the highway for another Carroll's Meats. I realized this was the bigger one, which I had called last year to see if they had kidney's for Ken. (So he could make steak and kidney pie. I don't eat meat or wear leather or suede. I would only do that for Ken, and Lori, who I had tried to get livers for at KFC.) I thought the bigger store might have chess squares, so I jumped off the highway to check. And yay! I got chess squares for everybody. They went into the cooler. 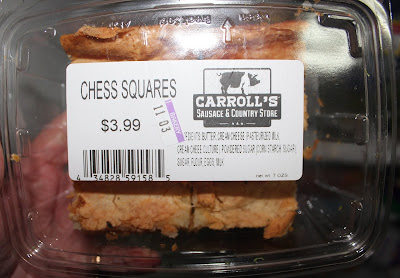 I also pulled off the highway to get gas at Buck-ee's, a huge gas station/store. 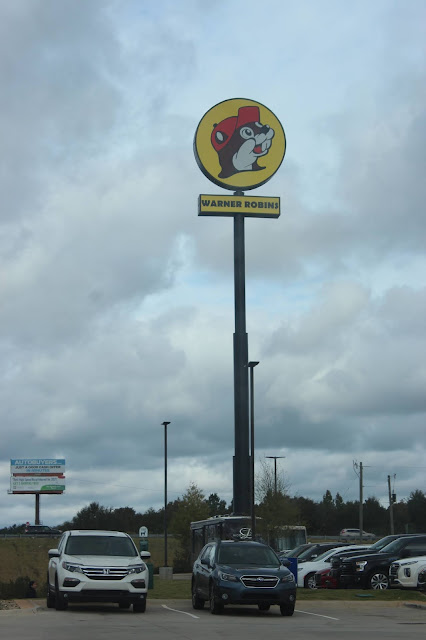 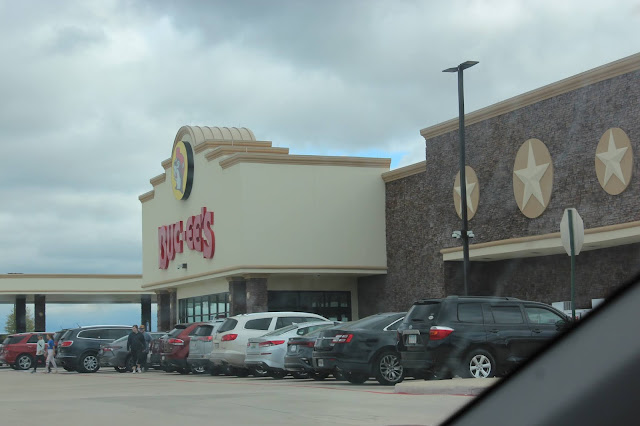 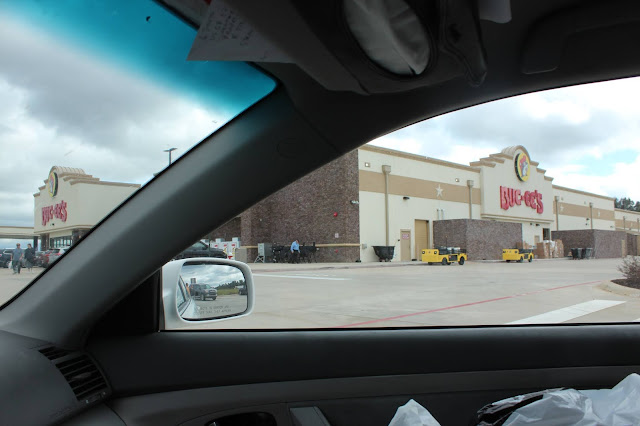 I guess it's pretty new in Georgia, and people must still be checking it out, because it was unbelievably busy. The place was packed and people were buying stuff like there was no tomorrow. There were gifts, clothes, food, snacks, hot food like Brisket sandwiches, (which they are famous for, and one of which went into the cooler as a surprise for Ken.), and tons of beef jerky and pastries. There was a station for Icees, and there were a million flavour choices.
There were about a million gas pumps too. 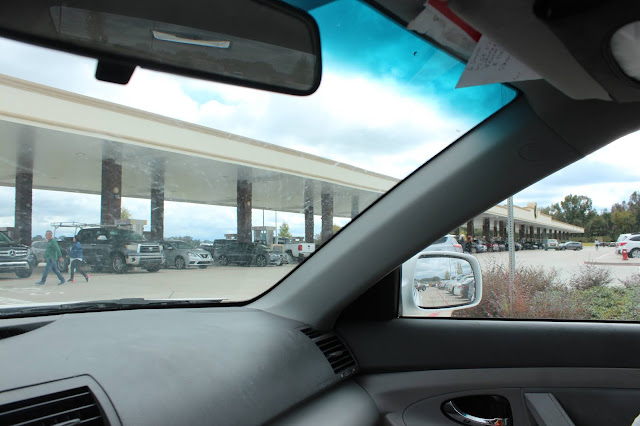 I arrived home in the early hours of Halloween morning. My shoulder had been bothering me before I left for Georgia, and all that driving made it worse. I took some muscle relaxants before bed for a couple of nights while I was at Lori's, and my shoulder got much better. Then, of course, I drove home, and it got bad again!

My shoulder is still awful. It pops around when I move it. If I'm lucky I can pop it just right and it stops hurting, but only for a minute, if I don't actually use it.