The Doll Book of the Month Club: Hitty, Her First 100 Years, and A Problem You Might Not Be Expecting

Well, if any of you are curious, my black eye is fading fast. It's in a nice state of yellow and green at the moment, so hopefully it will be gone in a few more days. The lump on my temple doesn't seem to be fading with quite as much speed. It's maintaining it's size. Luckily it was never very big to begin with after the first night. And, on to the Doll Book of the Month!

I suppose a  lot of you have been wondering just when  I was going to get around to this one. "Hitty, Her First 100 Years", a Newbery Award winning book, written by Rachael Field, and originally illustrated by Dorothy Lathrop, is one of the most famous doll books ever.

The reason I'm only just getting around to it is, I only just read it. I actually started reading it to the kids years ago, but after one sitting or two, it was deemed boring by Fuzz and Ivy, so we never continued. If they had stuck with it a little longer, I think they would have enjoyed it...except for...well, we'll get to that. Hitty's life was full of adventure. Carved by a peddler in the 1820's, she gets kidnapped by a crow... 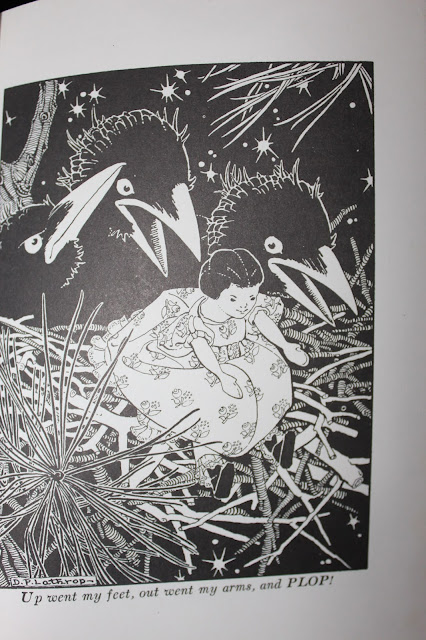 ...left on a burning ship, is shipwrecked on a tropical island, worshiped by island natives, lost in India, travels with a snake charmer, attends a concert by soprano  Adelina Patti and goes on stage with her, gets stuck inside a horsehair sofa for years, sits in a hay loft for years, is part of a cotton expo in New Orleans, floats on the Mississippi in a basket 'a la Moses, travels by ship, train,wagon, coach, and automobile. You name it, Hitty survives it, and goes on to write her memoirs, in an antique store in the 1920's. 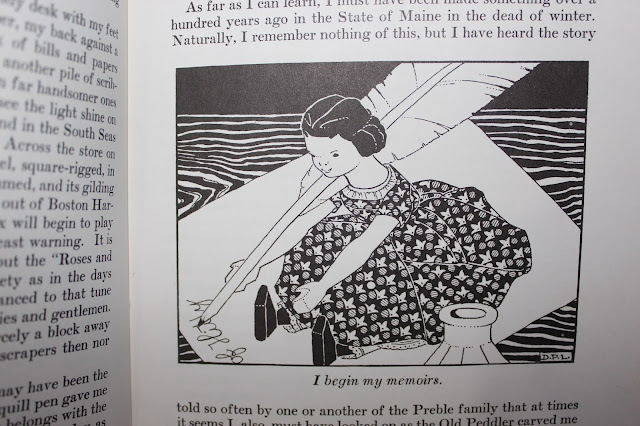 You may wonder how, after being lost so many times, and going from one owner to another over 100 years, how all of her owners could have known that her name was Hitty. The answer in the story is that her name was embroidered on her chemise, (an undershirt or loose cotton dress worn under clothes to protect them from body odor and sweat.), by her first owner, Phoebe Preble, and every owner since left the chemise on her, while changing all of her other clothes. 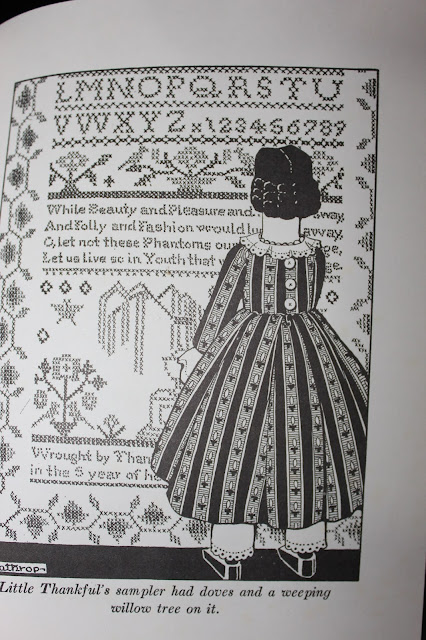 I did mostly manage to enjoy "Hitty", but there is a problem with this book. Remember it was published in 1929. Those were different days, and unfortunately Hitty  has some ideas about, and uses some names for, indigenous peoples that are far from appropriate or politically correct today, (nor should they have been then!). From calling Native Americans 'Injuns', and the native inhabitants of the Pacific, who steal her, 'savages', to describing the language of India as 'heathen gibberish' just because she didn't understand what was being said, to the phonetic spelling of the stereotypical Southern African American way of speaking, that is worse than the Brer Rabbit stories, this book is going to have to come with some conversation if read to kids today. Several times Hitty describes African Americans as having 'rolling eyes' and 'flashing teeth'. (I also have a problem with how nice Hitty thinks the (post Civil War) plantation owners are, and how wonderful the Christmas party they give for their workers, (undoubtedly their former slaves), is, when she has just finished describing the overcrowded cabins, with dirt floors, in which the rag clad workers live. A party once a year is nice, but maybe they could live decently all year long too.) It's one thing to tell a child that yes, people did have those opinions in the past, and it was wrong then and is wrong now. That is how most people thought in those days, and you can't just say they didn't. (Denying it or ignoring it would be wrong too.) But you can't just read this book to kids and not mention the 'elephant in the room'.  Doing that is like approving of the terms and opinions, and thus, passing them along to a new generation to use.

So, do I recommend the book? I'm a bit unsure it should be read to or by today's children, especially without an accompanying conversation, as I mentioned above. While enjoying Hitty's adventures, I was made very uncomfortable by the things I mentioned. It made me feel that maybe I should be throwing the book in a corner instead of giving it the honour of being read. (Talk about 'eye rolling'! I was doing a lot of that myself.) I know if I were a person of colour the book would bother me even more. I kept having to keep in mind that Hitty was from the 1800's. That didn't make it all right, but it somewhat explained it. But are kids going to think of that? Maybe, if read aloud to kids today, certain words and ways of describing people could be omitted, and the book could still be enjoyed. Maybe the book should be scrapped altogether. I suppose this is a subject for discussion, so I welcome your comments.

Hitty has been so popular that  actual Hitty dolls are very popular collectibles now. There are  handmade ones, with some artists specializing in Hitty dolls. There was even a Robert Raikes Hitty. There are all kinds of dolls inspired by Hitty. You may have seen my post on what I referred to as 'Hitty grandparents'. (If not, you can see it HERE.) Artists sell  their versions of Hitty's possessions, or even things Hitty didn't have, but can use. (And there are plenty of items Hitty once owned, to make. Hitty's little owners made her new clothes practically every time she went from one to another, and the things that were given to Hitty or made for her by friendly adults can at times leave you very upset when they're lost in one of Hitty's adventures. The fabulous wardrobe made by Miss Pinch, her coral beads that she managed to keep through several owners, the magnificent wedding dress made from a family heirloom... 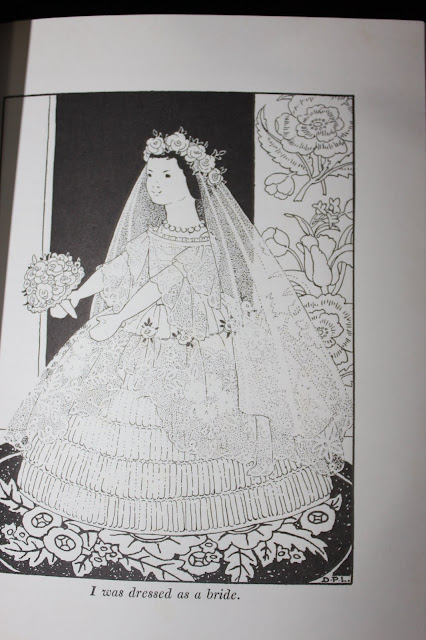 ... and I want the chest, with her name in tiny nailheads, made for her by one of the men on the whaling ship. All of it gone!) 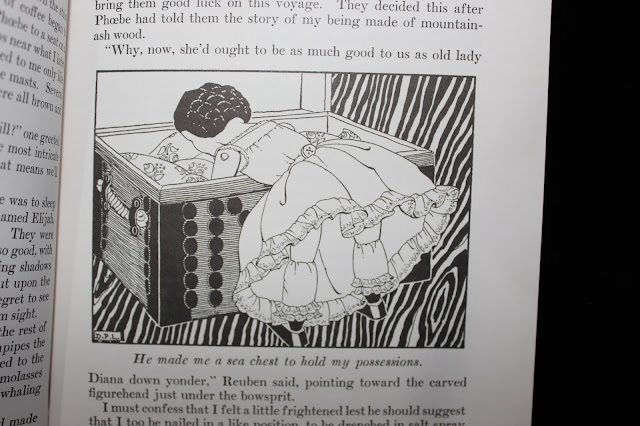 Hitty, the book character, was based on a real life doll that author Rachel Field and illustrator Dorothy Lathrop found and bought in a New York antique shop in 1927. As the story goes, they discovered Hitty separately, and both wanted her, but neither could afford her. Finally they visited Hitty together, and decided to pool their  monies and buy her to share. They dressed her and bought her furniture  and other things a doll needs. And the truth of the real Hitty is that she does actually have her name, 'Hitty', embroidered on her chemise.  Hitty is a common nickname for the name, 'Mehitable', an Old Testament name, and Hitty's full name in the book. (You may have read my review of the book, "Merry, Rose, and Christmas Tree June", in which there is a doll named Mehittable, that takes the name literally.)  She was assumed to be about 100 years old at the time she was purchased by Field and Lathrop, so that's how old she is in the book. However, some people speculate that she might be younger, made in the 1860's or so, based on her hair style. Of course, that still puts her way over 100 years old now days.

One thing that may be different from how Hitty is described in the book, is what she's actually made of. Although in the book Hitty repeatedly refers to how special she is because she's made from Mountain Ash wood, there is some speculation that she is actually made of White Ash.

Today the original Hitty lives in the Stockbridge Library Museum, in Stockbridge Massachusetts   She came from the estate of Dorothy Lathrop, but I'm not sure if she was left to the library, or they obtained her somehow though other means. (Lathrop passed away in 1980, nearly 40 years after Field, who died in 1942.)  She is 6 1/4 inches tall, with painted stockings, boots and hair, and was possibly painted all over. She's now so worn it's hard to be sure. She can be viewed by the public, but because she is delicate these days, photography is no longer allowed. (Gee, they could have allowed non-flash photography. That wouldn't hurt her.) You can see some very good detail pictures of her HERE though.

For a good page with lots of Hitty information I recommend you go HERE. For lots of detail about all of Hitty's physicality, you should go HERE. It's especially handy if you would like to make a Hitty of your own. You can buy blank precut wooden Hitty dolls for carving the details into.

Rachel Field grew up in Stockbridge Massachusetts, where Hitty now lives in the Library Museum. She wrote books for adults as well as children. One of her books,  "All This and Heaven Too"  was based on the true story of Field's great aunt, Henriette Deluzy Desportes, a governess who fell in love with her employer, and was implicated when his wife was murdered. It was made into a movie, starring Bette Davis and Charles Boyer, in 1940. Field also wrote poetry, plays, and the English lyrics for Schubert's  "Ave Maria", used in Disney's "Fantasia".  If you want to read more about Rachel Field, you can check out a biography of her written by Robin Clifford Wood HERE. 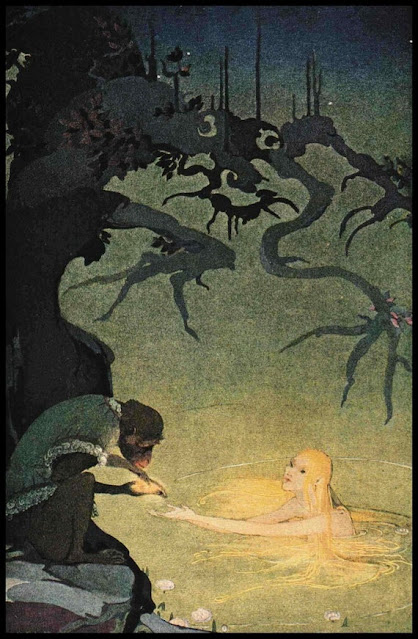 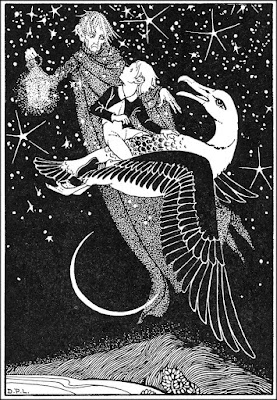 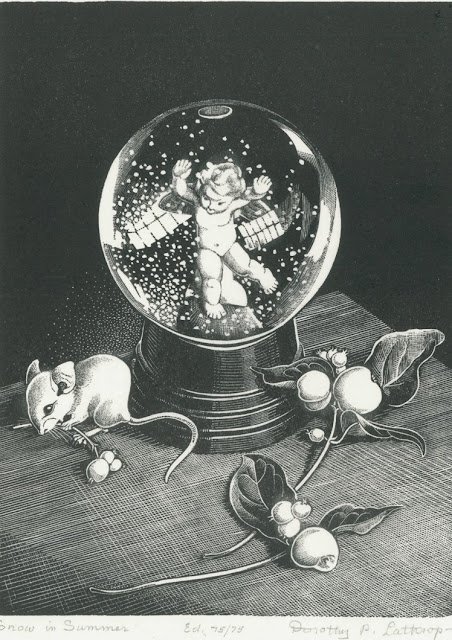 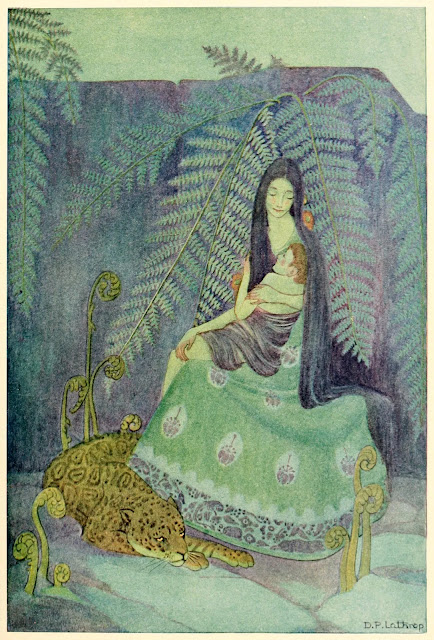 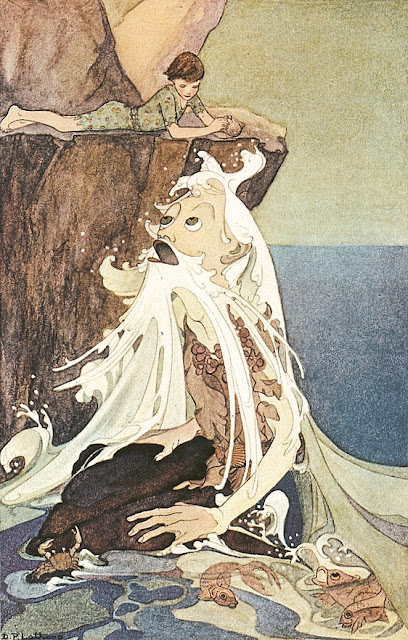 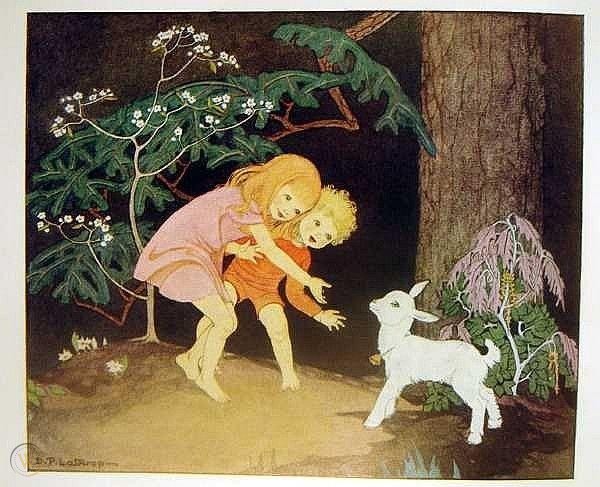 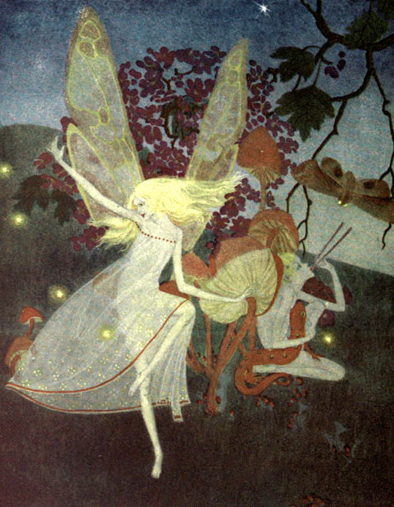 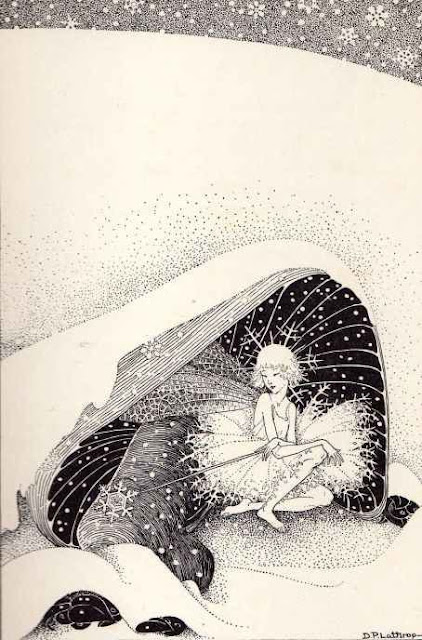 That's the book for the month. See you again soon.