Update: I have replaced most of the pictures I borrowed with pictures of my own Teresa,which I bought after this post was done. To see the post on Teresa herself, go HERE.

First off: I have borrowed a few pictures for this post to help with identification and comparison. If the owners of the photos wish them to be removed I will gladly cooperate. If not, thanks for your help!
For a while now I have been planning to do a Red Heads Week. Even though I was never crazy about my own red hair, I love dolls with red hair, so quite a lot of my dolls are red heads. I could do a few weeks. (Of course, if you're a regular reader, or someone playing catch-up, you will have seen quite a few of my red haired dolls already.) I finally decided to just do it. Our first doll of Red Heads Week is Georgette. 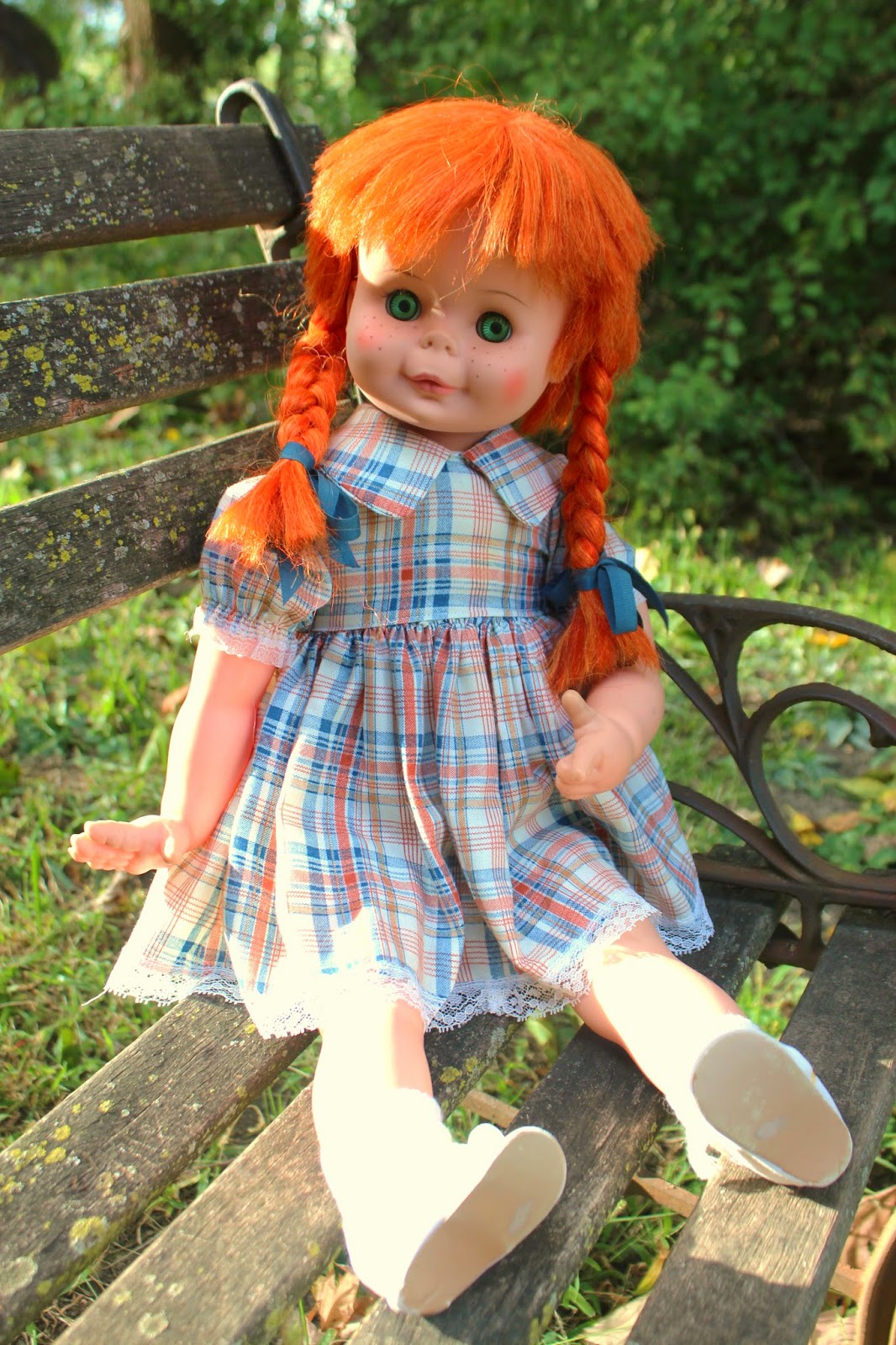 She was made by Eegee in 1971 I think.She's a little hard to find information on. (She's supposed to be kind of rare.) 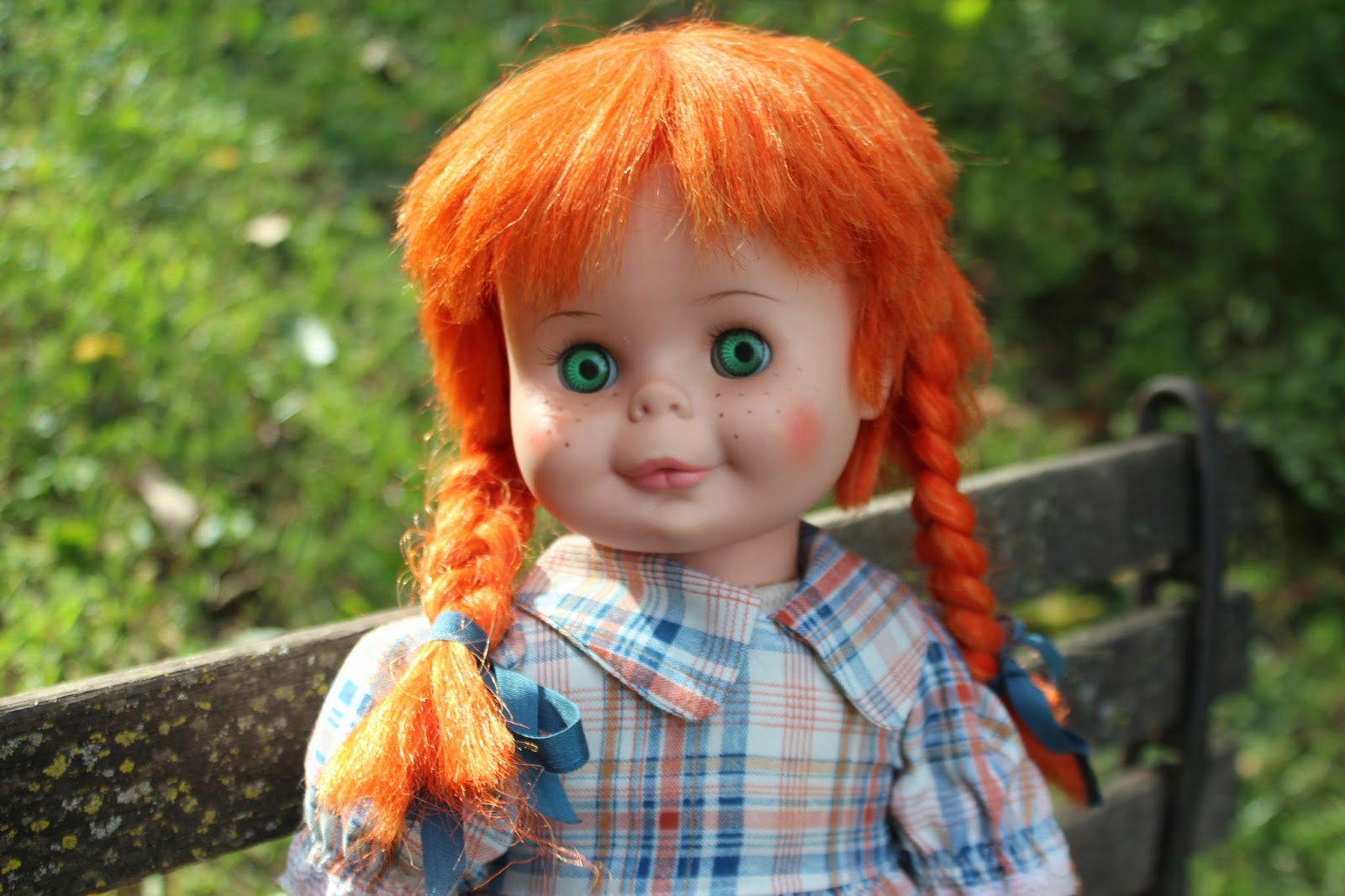 She is actually Georgette, but a lot of people refer to her as Pippi Longstocking. I'm not sure if this is because Eegee used the same basic doll for a Pippi doll, just because she has red hair in braids, or because she bears a great resemblance to this girl:

It's a little confusing. Were Furga and Eegee related? Eegee is the same company as Goldberger. (Eegee, as in E.G. for Eugene Goldberger.) What's the connection between Furga and Eegee though? Did one of them just sell the molds to the other? (But the eyes are waaaay different, so is the mold exactly the same?)Hmm... 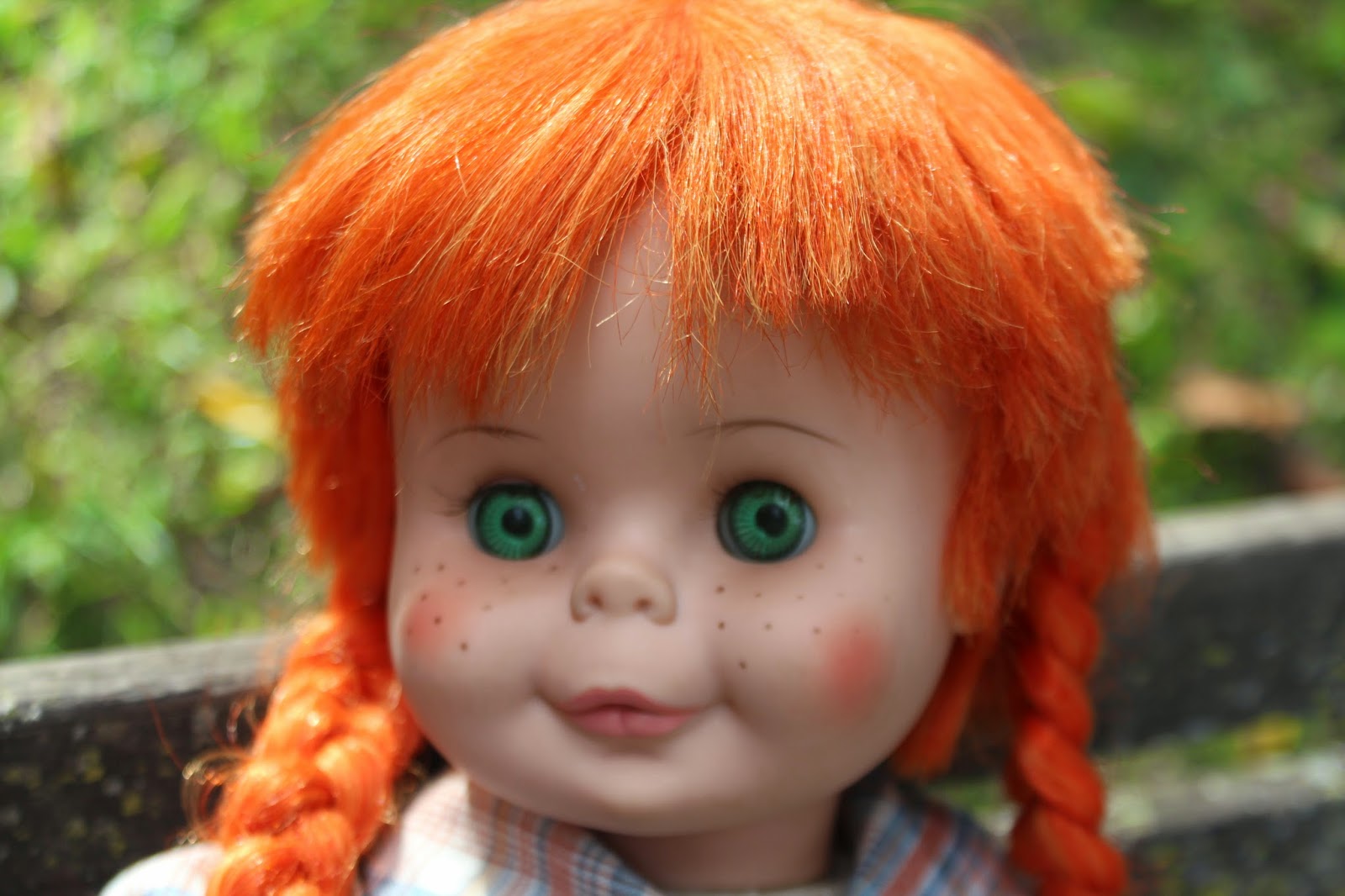 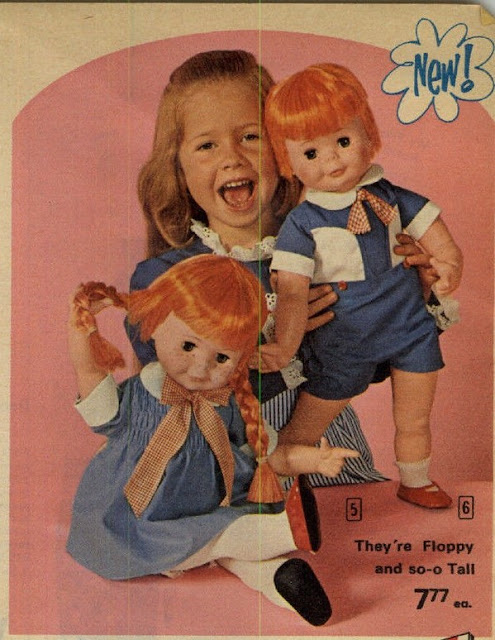 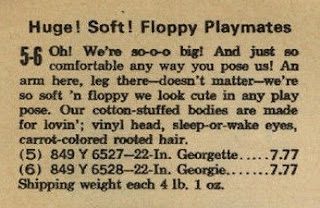 Look! She's wearing the same dress as Teresa!
My Georgette has been redressed, because her dress is a bit tight. She's wearing matching bloomers though, that fit perfectly.


George and Georgette were both sold as 'the Flippety Floppety doll', as was this girl: 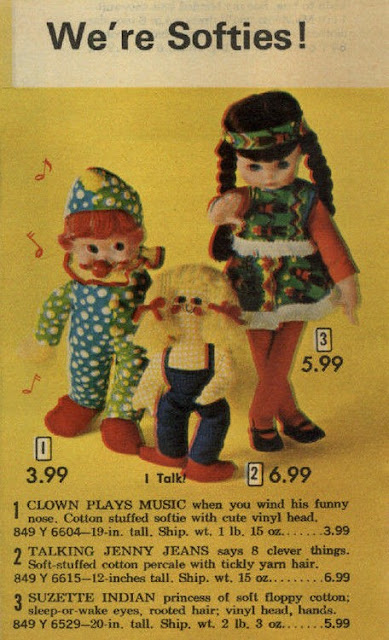 She is like Georgette, with the same hands, but a different head mold. 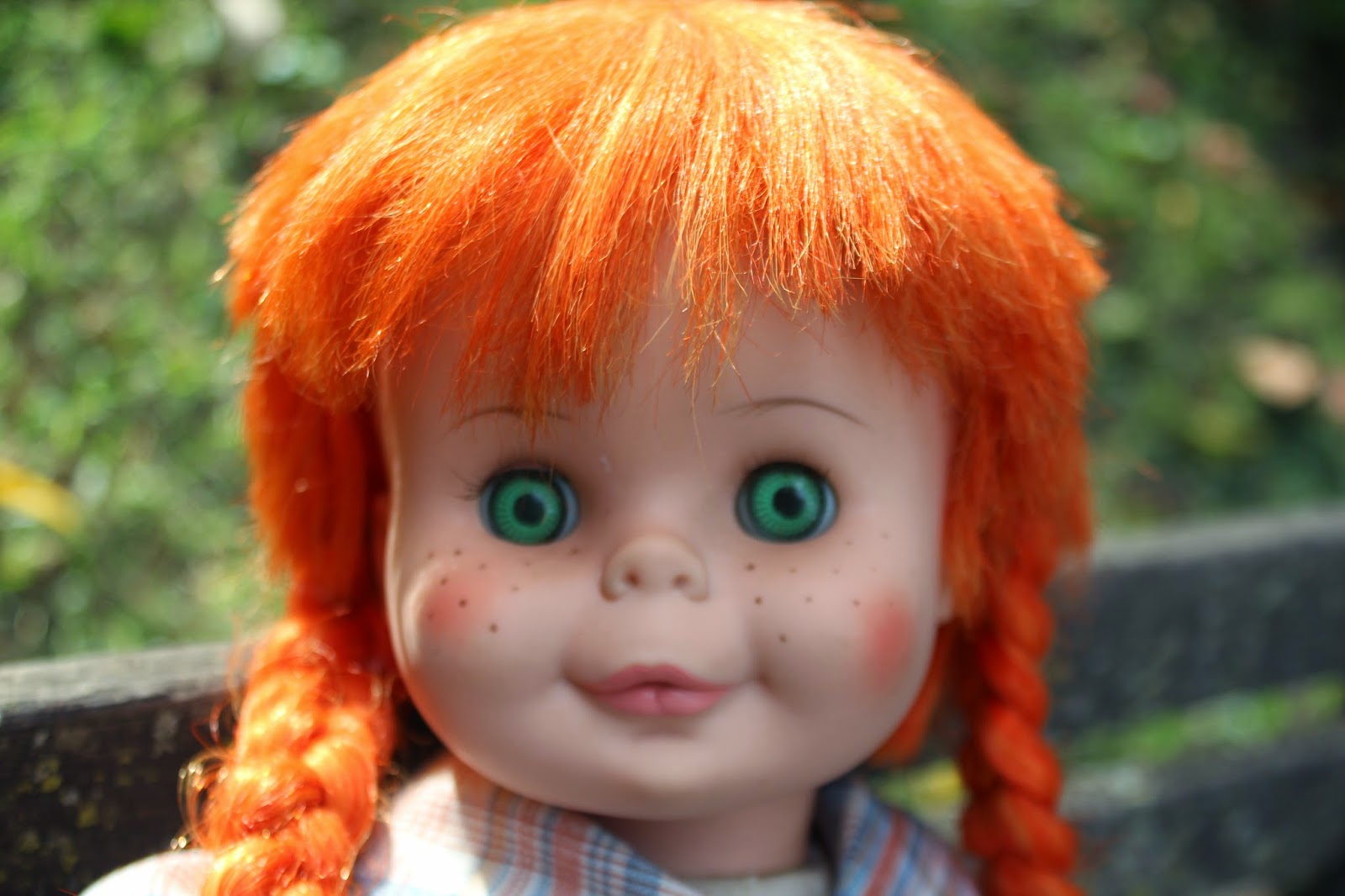 I saw Georgette and George as a pair at the local doll show a couple of years ago, but didn't buy them. At the most they were $65, which was too much for me. Now I know that's actually a pretty cheap price for the pair, especially since they were both in their original clothes. 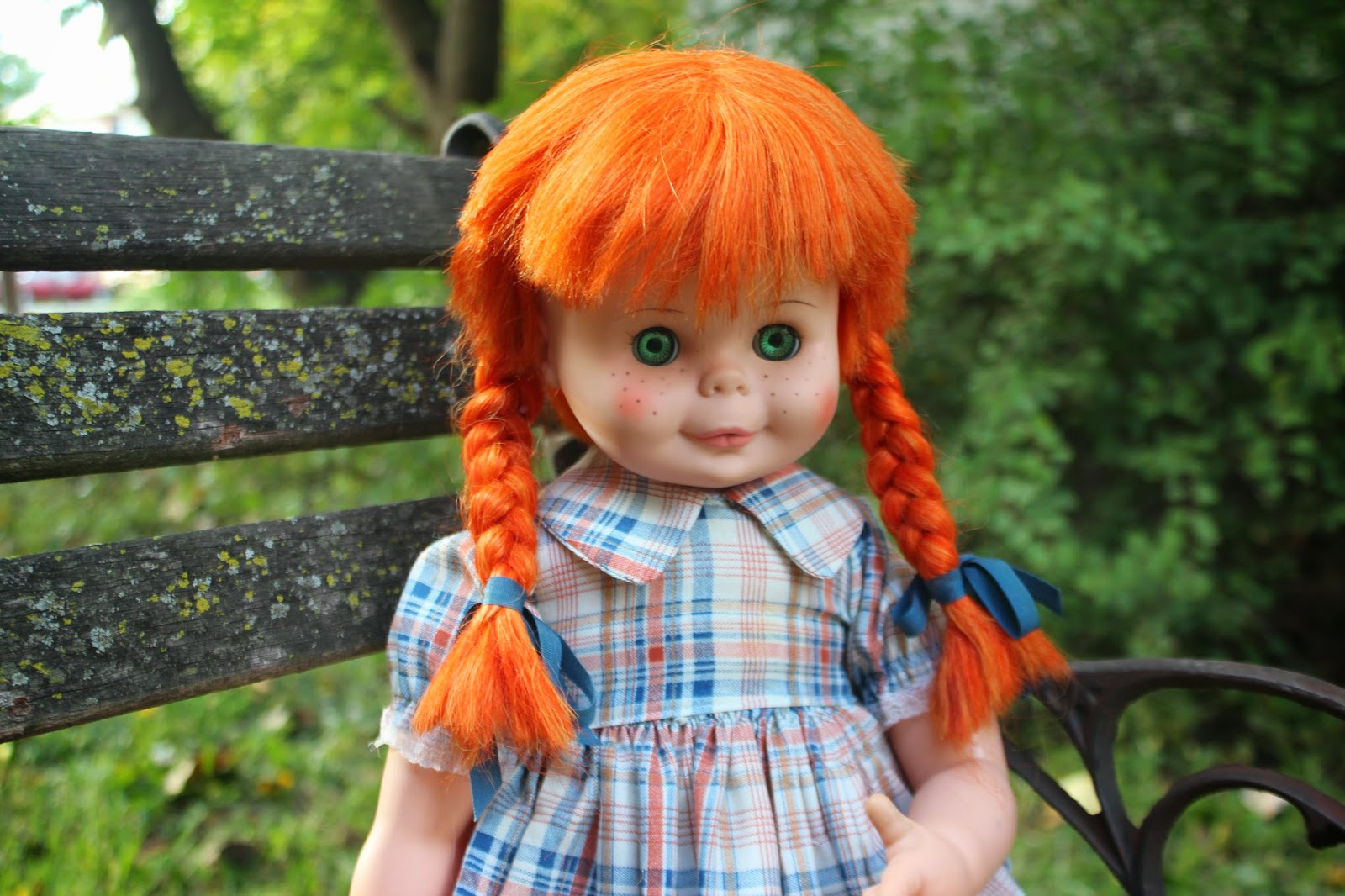 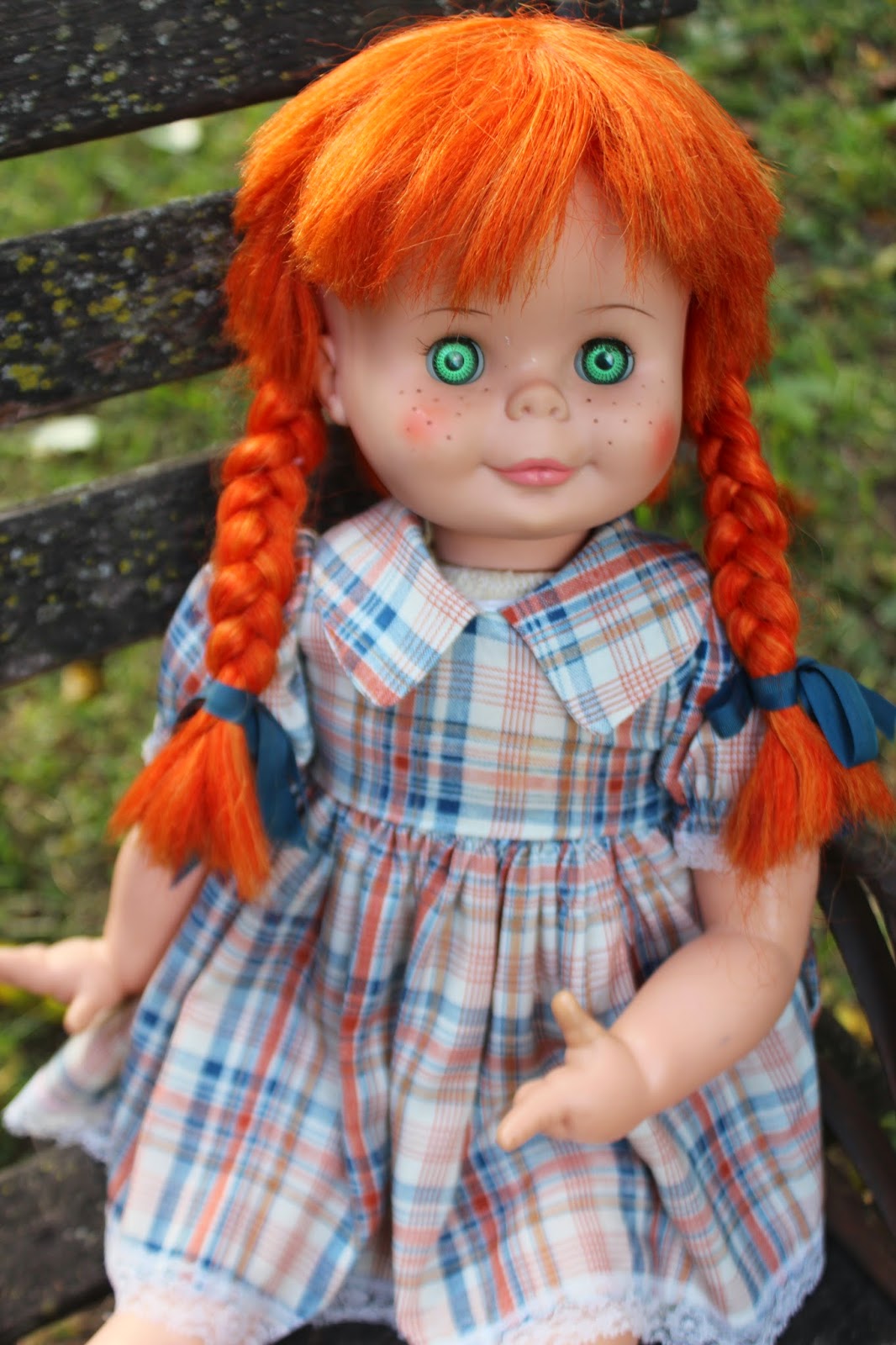 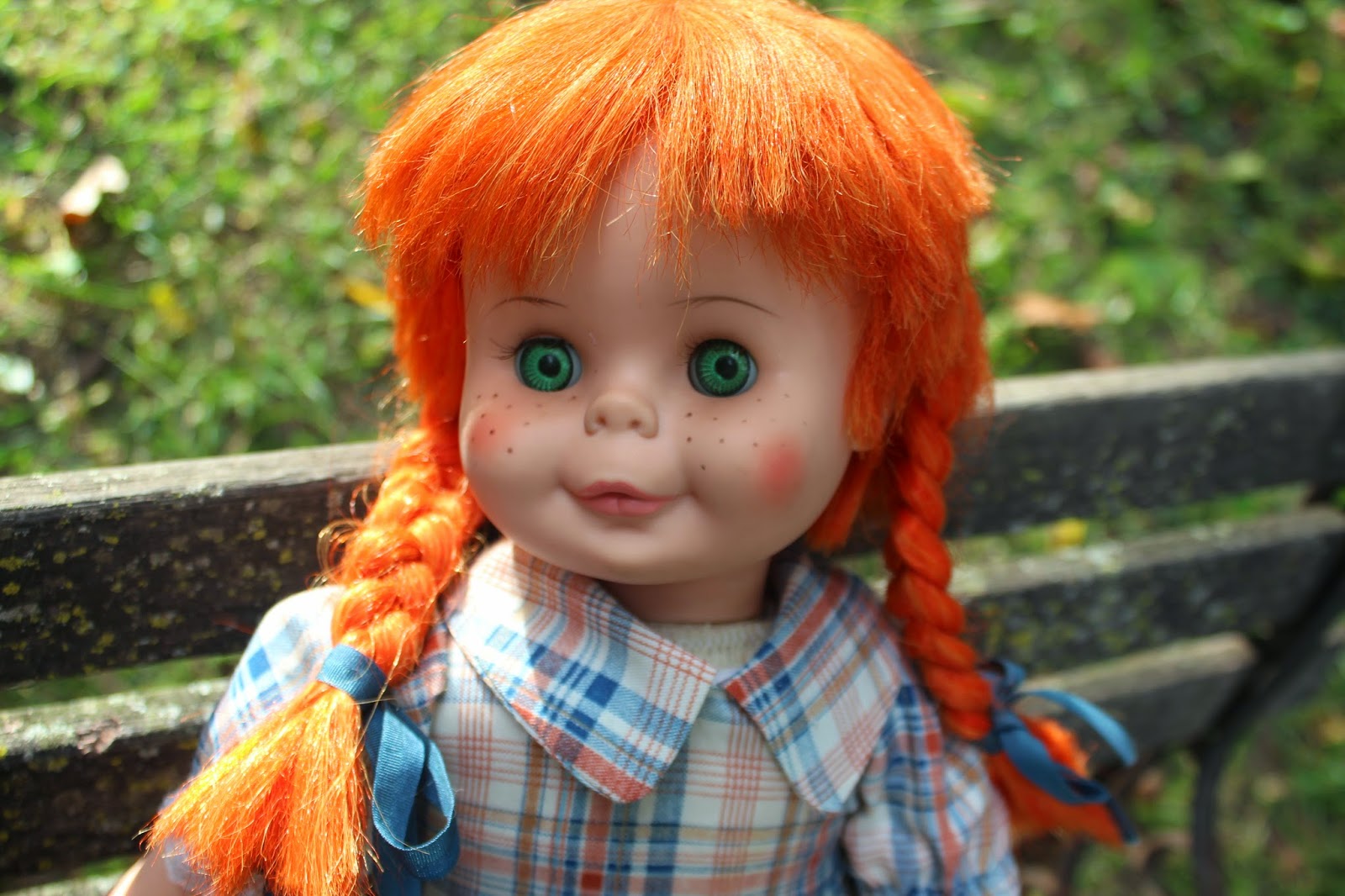 My Georgette has replaced shoes and socks too, and the shoes are way too small. 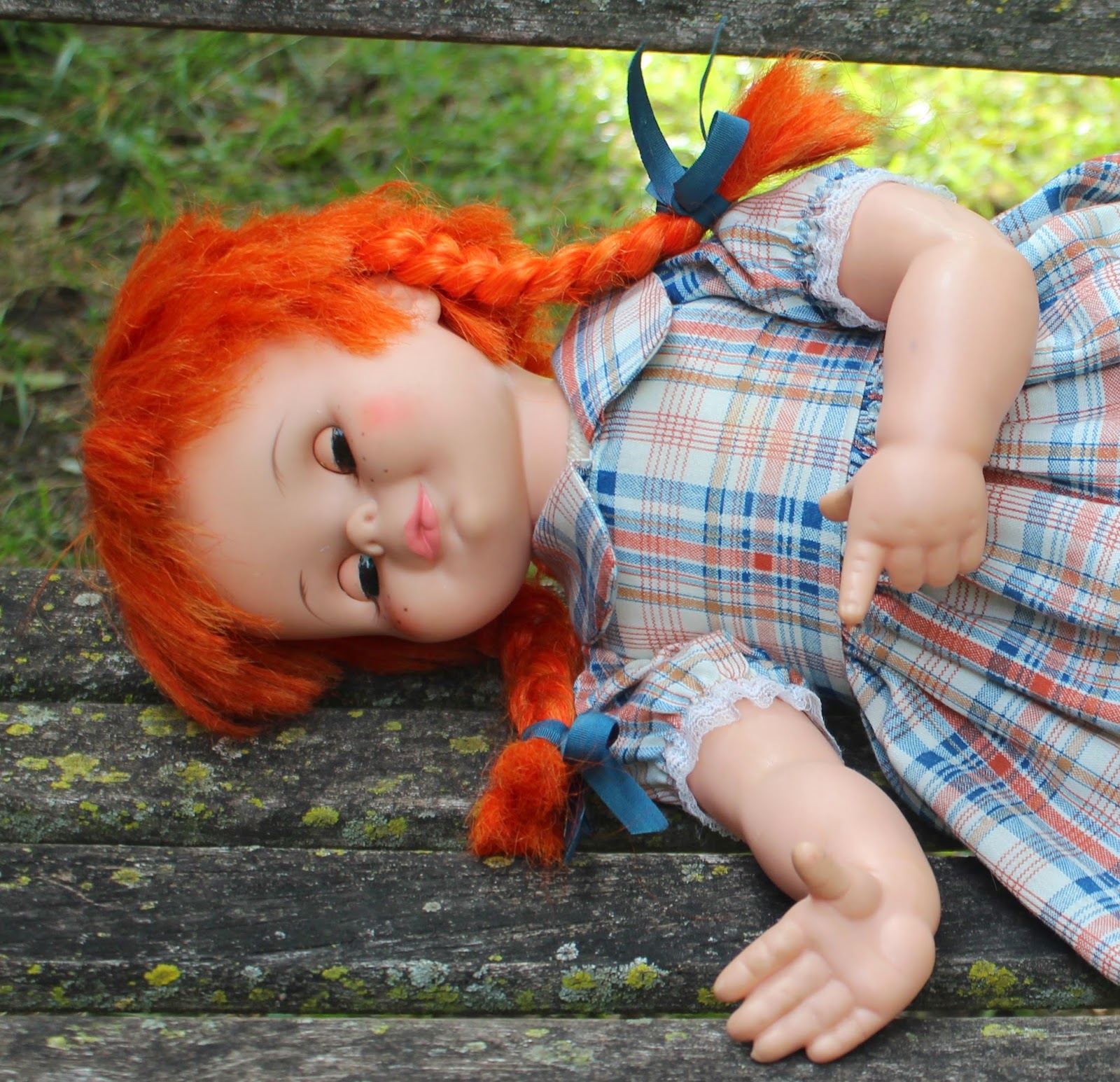 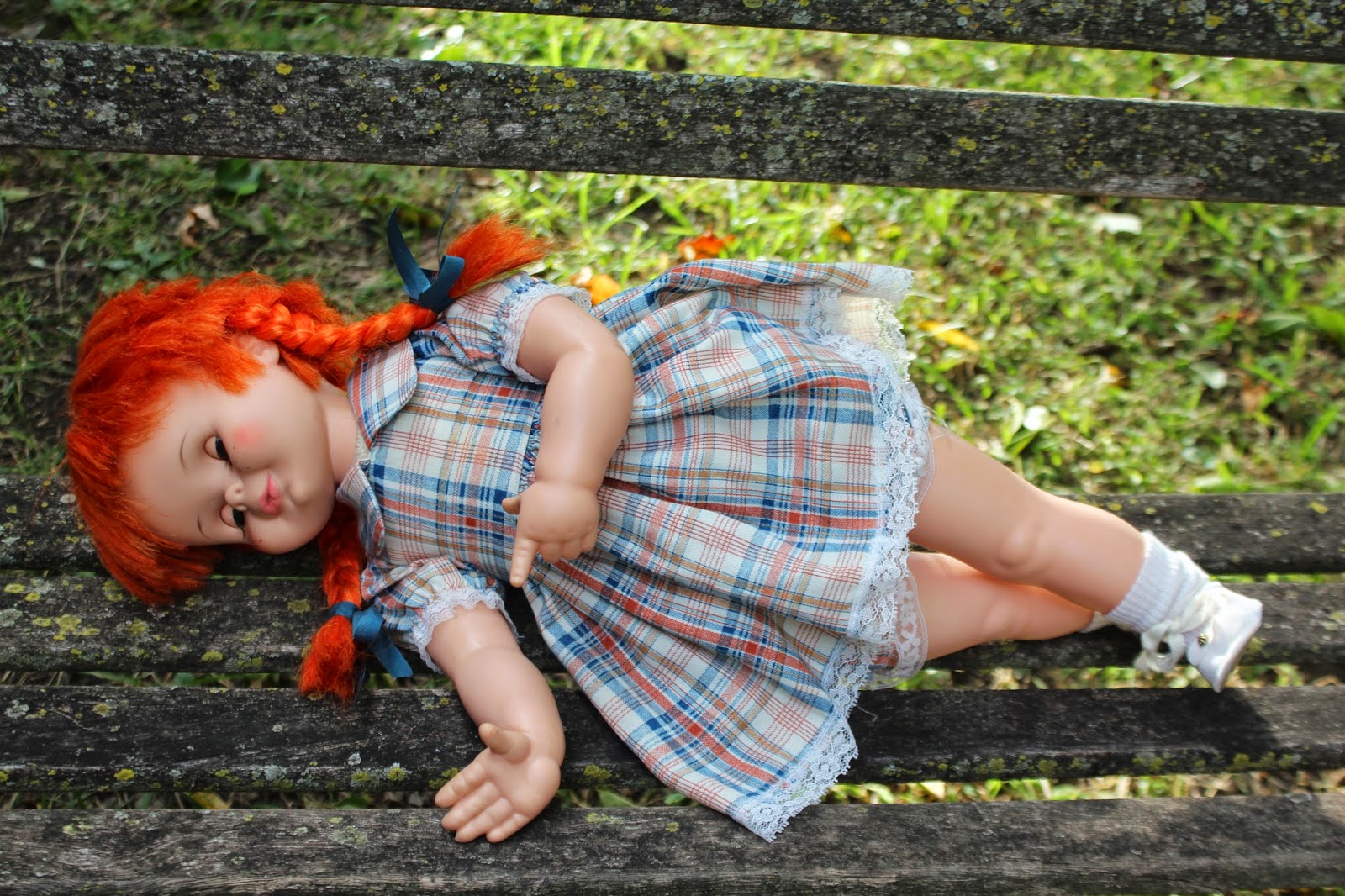 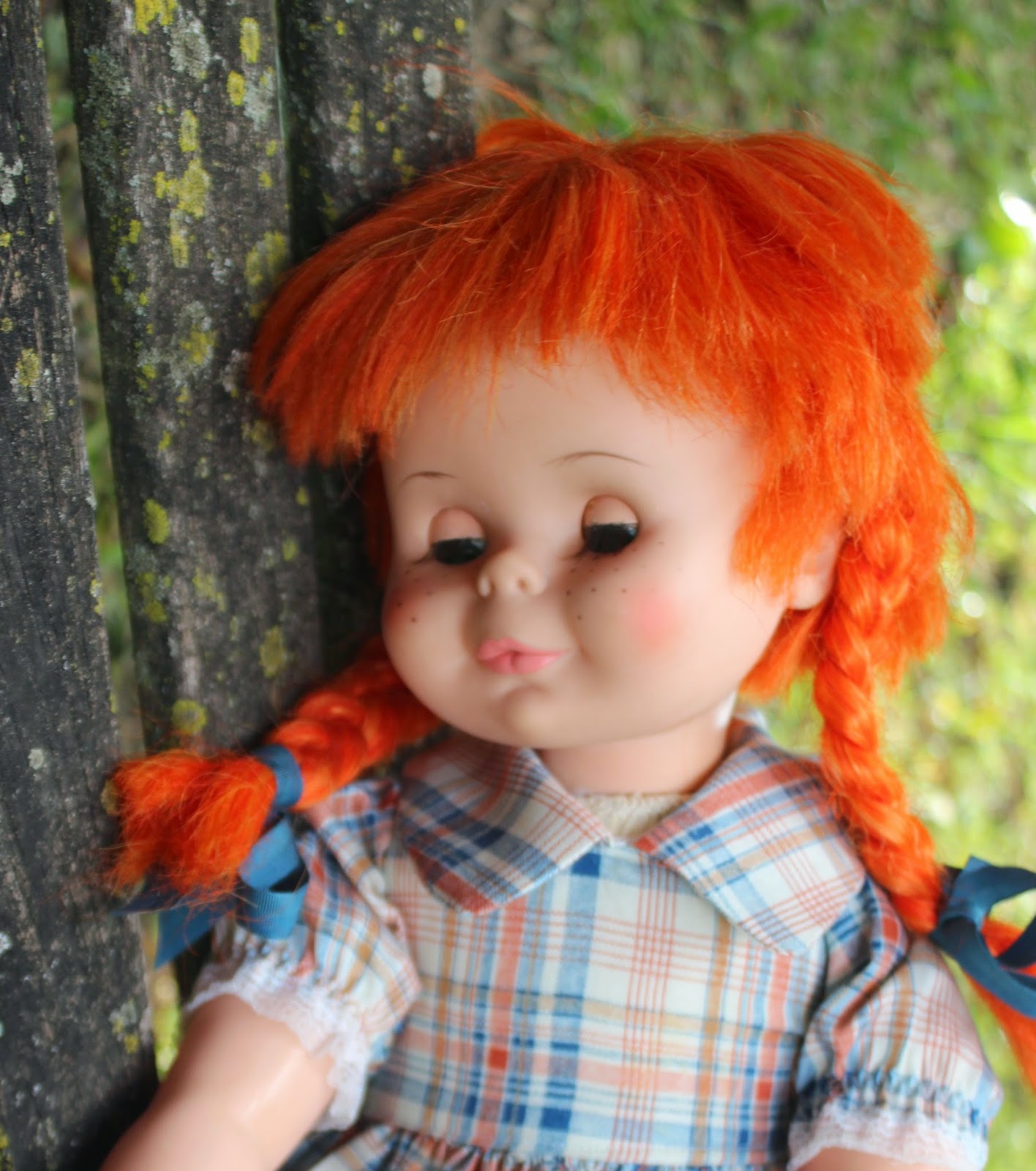 The origins of red hair have been the subject of some wild theories over the years. Throughout history red heads have been feared, hated, tortured , and even killed because of the colour of their dead cells. (That's what hair is made up of.) We now know that red hair is caused by a rare mutation on the MC1R gene,a recessive gene.That means that it can lay hidden at the bottom of your family gene pool until one day it suddenly floats to the surface and produces a red haired child where there were none before. The only way that can happen though, is for both parents to have the recessive trait. A family can go for generations without red heads, and then all it takes is for one family member to find a mate with the same recessive gene and boom: red haired kids. This is why my family had no red haired people for generations, until my Dad's grampa, and then Dad. Then Dad had me, and I had two red haired kids. Ken was born with red hair, but his mom wished it off of him. Too late. The gene had been passed on.
Redheads are known for having bad tempers.(I know this one is true for me.)In ancient times red heads were burnt as witches. In medieval times red heads were considered untrustworthy, and their bodily fluids were thought to have magical properties.It was believed poison could be made from the fat of a red-haired man,and his blood could be used to turn copper to gold.The urine of red-haired boys was used to make paint for stained glass windows.(Eww...) Most of these beliefs seem to stem from the rarity of red hair. It was considered not 'normal', since so few people had it. That's still true. (Although the recent claims that red heads are going extinct are considered by scientists to be ridiculous, mostly due to that 'it can crop up unexpectedly any time' thing I mentioned. Sorry folks, but you're never really going to get rid of us.) Only 1-2 % of the world's population has red hair.


In spite of the popular belief that Ireland is full of red heads, it's Scotland that actually has the largest population of red heads of any country in the world: 13% of the population has red hair, and around 40% carry the recessive gene.(Which is why they have so many red heads. All those recessive genes marrying other recessive genes. It's bound to add up.)
The Irish Redhead Convention is held in late August. Redheadday is a Dutch festival that takes place each first weekend of September in Breda, the Netherlands. (Sorry, you just missed it.) It's a  two-day festival, and is a gathering of people with natural red hair. Both attract people from around the world.
During the week we'll look at some other facts about red hair, and see lots of red haired dolls.