***I recently posted a link to an article about Frances Glessner Lee on this blog's Facebook page. What follows here is NOT that article, but an article of my own,based on various sources,thus the information here may not be the same as what's contianed in the Facebook link's article.***
Ever heard of Frances Glessner Lee? She's famous for her work in miniatures...but  not in the way you'd think.
Frances Glessner Lee was born in 1878. Her father was a co-founder of International Harvester. The family lived comfortably,with her father collecting fine furniture and even authoring a book on the subject. While Frances' brother was sent to Harvard, Frances was not allowed to attend college. Her father thought a lady should stay home and have lady like pass times, like needlework. Frances, however,was interested in forensics, which was in it's infancy at the time.

Francis became friends with her brother's college roommate,George Burgess Magrath,a Harvard medical student. They shared an interest in death investigation.She probably became interested in investigation and crime through the Sherlock Holmes stories she enjoyed, which were also her father's favourites. She was interested in a career in crime investigation, but her father forbid it. Instead,in 1898 Francis married Blewette Harrison Lee, a legal scholar and attorney she barely knew. They were married for sixteen years and had three children. During that time Francis left him twice. They divorced in 1914. Her father was so ashamed of her that he sent Francis and her children far from him,to Santa Barbara, California.
After her father's death in 1936 Francis was finally free to pursue her interests in crime. She also inherited the family fortune,as her brother had died in 1929. She wasted no time in endowing the Harvard Department of Legal Medicine,the first university department of legal medicine in the country,  and the Harvard Associates in Police Science,which has a division named after Francis, called the Frances Glessner Lee Homicide School. Her friend George had become the chief medical examiner in Boston in the meantime, and he and Francis had worked together to change the requirements for the job of coroner. At the time coroners needed no medical credentials. After George and Francis successfully lobbied for change, people seeking the job of coroner were required to be medical professionals.
"But what does all this have to do with miniatures?", you ask. Well, in the 1940's Francis began to host week long homicide investigation seminars. Investigators and detectives who attended these seminars were invited to solve a crime from a miniature crime scene Francis had created in 1/12 scale. 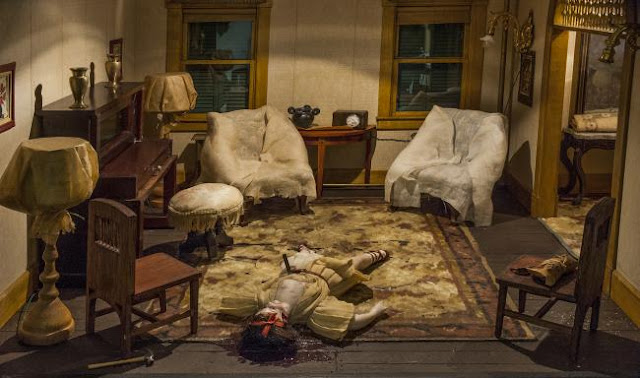 Frances called her miniature scenes "Nutshell Studies of Unexplained Death",(Inspired by the phrase "Convict the guilty, clear the innocent, and find the truth in a nutshell". I wonder if the famous miniatures magazine Nutshell News would have chosen a different name if they had known about Francis and her murder scenes!)

The Nutshell Studies were all based on actual crime scenes. 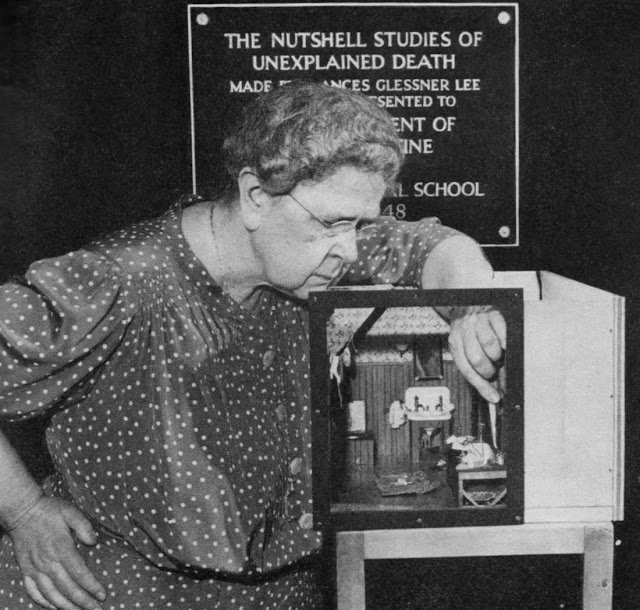 The largest of the tiny murder scenes had three rooms. They each cost Francis between $3000 to $4500 to make, (I'm not sure why.),were fully wallpapered and furnished,and extremely detailed... 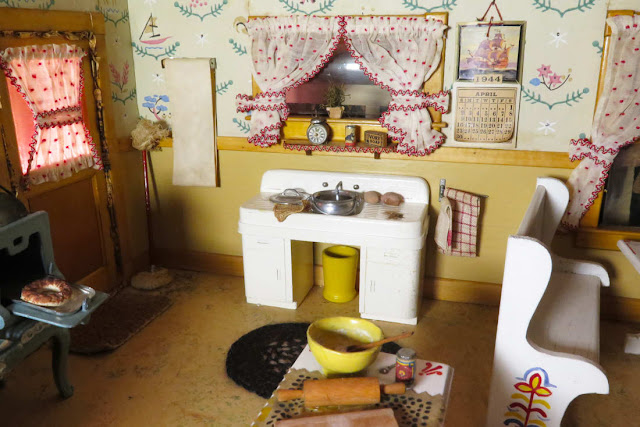 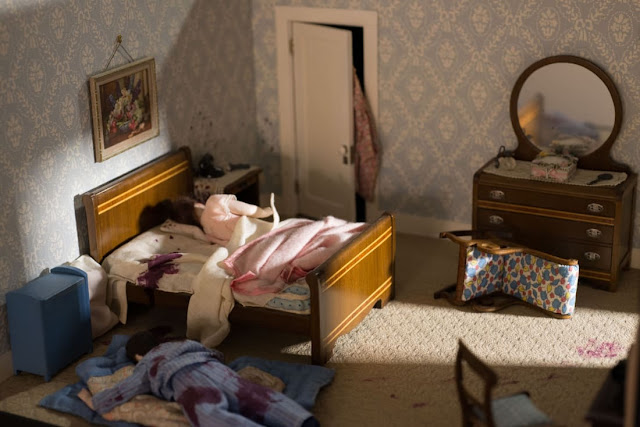 Francis even made sure the figures all wore underwear under their clothes, and she went so far as to crochet a teensy teddy bear and knit their minuscule stockings herself.

The attendees of the seminars were given 90 minutes to study the scene and try to solve the crime. 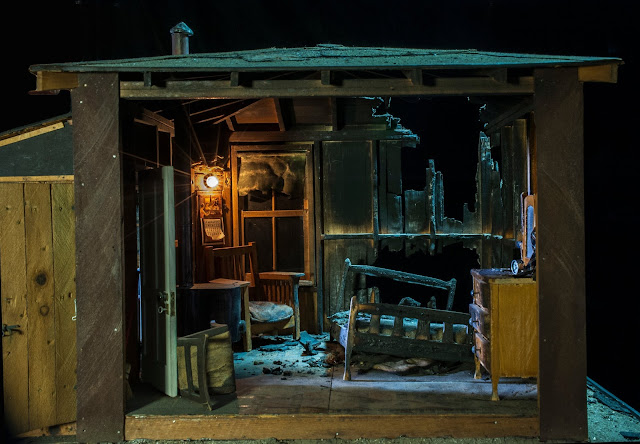 In all Francis created 20 Nutshell Studies. Nineteen of them have survived the years. (Some sources say 18,but a nineteenth was discovered in the early 2000's,at Francis' former home.) When the Harvard department Francis founded was dissolved in 1967, the dioramas went to the Maryland Office of the Chief Medical Examiner,where they are still used to train students of forensic investigation.
In her day Francis was friends with  Erle Stanley Gardner, the creator of “Perry Mason”. Gardner dedicated the Mason mystery,“The Case of the Dubious Bridegroom” to her,and called Francis, “One of the few women who ever kept Perry Mason guessing.” Francis is now known as the ' Godmother of modern forensics'. In 1943 she was made an honorary police captain in the New Hampshire Sate Police. With the honour Francis became the first woman to join the International Association of Chiefs of Police. Some articles state that Francis was an actual Police Chief. but it was an honorary position,and not her actual job, as I read in one article on the Nutshells. Still, not bad for a woman in 1943.
At the age of 73 Francis wrote,“This has been a lonely and rather terrifying life I have lived.”. Francis died in 1962 at the age of 83.
There's a good article about Frances and her work,including the restoration and preservation of the Nutshells which you can read HERE. You can watch a report on, and video 'tour' of Francis' work HERE. There's also a lot of close up images of the various dioramas in the video you can watch HERE. Please note that in that second video, all the images of moving smoke, flame, and bugs, and the name of the Youtube channel,'Obsolete Oddity', were added by the channel posting it to Youtube,and are not part of the actual dioramas.
Posted by Tam at 9:56 PM