The Doll Book of the Month Club: The Racketty Packetty House

This month's Doll Book of the Month Club entry is Racketty Packetty House by Frances Hodgson Burnett, with illustrations by Harrison Cady. 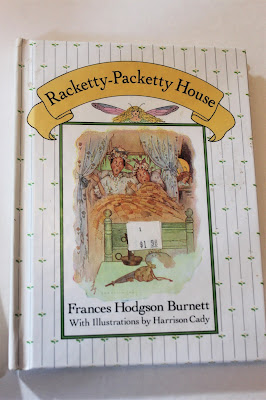 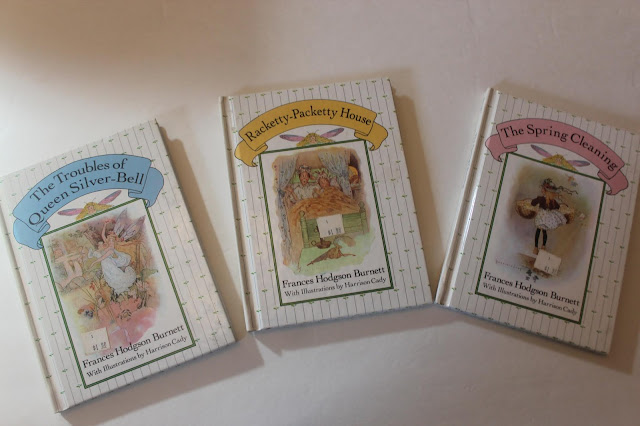 We have these three. I bought them for Ivy, but I don't think she ever let me read them to her.

"Racketty Packetty House" is told by Queen Crosspatch, of the fairies. She and her fairies are friends with the inhabitants of the house, a group of jointed wooden Dutch dolls. The dolls and the house, originally belonging to the currant owner's grandmother, were once grand and elegant, but at the time of the story have seen better days. When they were new the dolls had extravagant clothing and the house was beautifully furnished and wall papered. Over the years some of the dolls were lost or broken. The dolls that are left are shabby, missing paint, and, in one case, missing a leg. The furniture is worn and full of holes and part of the wall paper is missing. The dolls are friends with the mice, with one even being proposed to by a mouse gentleman. 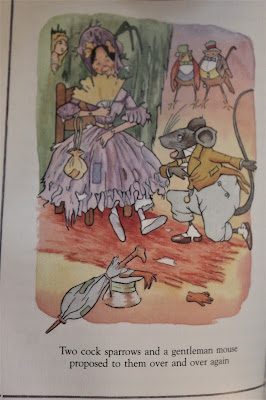 The owner, a girl named  Cynthia, is gifted with a new doll house called Tidy Castle, and lots of fancy new dolls. The Racketty Packetty house is shoved behind the door and covered by a chair, until someone can come and take it out to be burned. Fortunately, once there, the house is forgotten for a time. The dolls live in fear of the day they are rediscovered and have to face their fate. Of course, these dolls run all over the place, so why can't they just escape?

These dolls do run around, although it is explained that they can't move when people are watching. I think it's a situation where they just drop in place if someone sees them, and are unable to move. It's also explained that the dolls have accepted their 'racketty packetty' existance. They don't mind being raggedy and their house going to pot. They laugh at everything. In fact, it seems to border on mental deficiency.

The descriptions of how goofy these dolls are and all the stupid things they laugh at seem to go on forever. It makes the beginning of the book repetitive and boring. 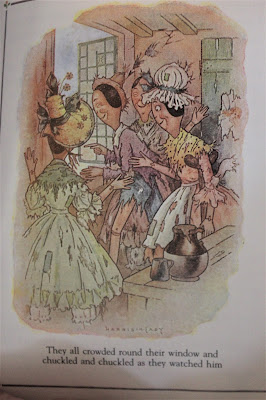 It may, in fact, be the reason Ivy never let me read these books to her! I was getting pretty sick of it myself when I read the book for this post! But it doesn't last, and the book goes on to be entertaining.

Queen Crosspatch protects the dolls from discovery and assigns fairies to keep an eye on things in case the dolls need help. In the meantime, the old dolls keep an eye on the new dolls. They love looking at the snooty, beautifully dressed dolls, living well in their gorgeous house. The new dolls, however, look down on the old shabby dolls. They consider them well below them and the Racketty Packetty House is considered a 'bad neighbourhood'. Only one of the new dolls doesn't think the old dolls are bums.

One lovely doll in Tidy Castle, Lady Patsy, likes to watch the old dolls. She loves watching them having fun and laughing. Peter Piper loves watching her too. He becomes quite a stalker in fact, sitting and staring at her from a window. He falls in love with her, and finally ventures over to propose. 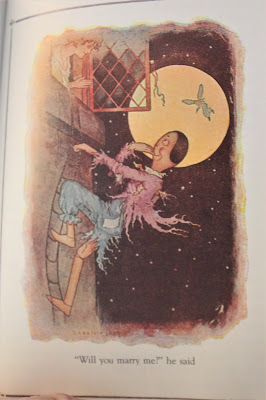 Will she accept? Well of course. But what about the fate of Racketty Packetty House? Will the dolls be burned? Will Lady Patsy become a widow? The finale finds Cynthia being visited by a young princess. When I saw that, I knew what was going to happen to Racketty Packetty House and it's inhabitants. I'm sure you have an idea too.

In case there are some of you who have never read a fairy tale, I won't ruin the ending!

Some of you may recognize Frances Hodgson Burnett's name.

She was the author of "Little Lord Fauntleroy", "The Secret Garden", and, one of my favourite books, "A Little Princess", the story of 'Sarah Crewe', famously made into a colour movie starring Shirley Temple. (You can watch the movie HERE, or the 1986 remake HERE. It was also remade in 1995.)

Burnett was born in Manchester, England in 1849. After her father's sudden death in 1852 the family came upon hard times. Frances lived with relatives, including her grandmother, who was responsible for fostering Frances' love of books and reading.The family moved several times.

Frances was a storyteller throughout her childhood. She loved to write stories, and entertained her cousins and school mates with her tales. Frances and her siblings attended The Select Seminary for Young Ladies and Gentlemen, the name of which bears a similarity to Sarah Crewe's school, Miss Minchin's Select Seminary for Young Ladies. Frances attended the school until she was 15, at which point another family move forced her to leave school.

In 1865 her mother's brother invited the family to move to Tennessee,near him, where he owned a sussessful dry goods store. In preparation for the move, Frances' mother sold most of the family's possessions and told Frances to burn her writings. Soon after the move the Civil War ended, and Frances' uncle lost most of his business, leaving the family in need again.

In 1868 Frances began to sell stories to magazines to make money for the family. Soon her stories were appearing regularly in such magazines as Harper's Bazaar, and by 1869 she had made enough money to move the family to a better house.

Frances was married in 1873. She and her husband had a son, Lionel in 1874, and later, while living in Paris, another son, Vivien. Later the Burnett's moved to Washington, D.C.. Frances began to write novels, and "Little Lord Fauntleroy was published in 1886. Although she is known for her wonderful children's books, Frances also wrote romantic novels for adults, which were very popular in their time.

Her books can be moody, and Sarah Crewe had a pretty hard childhood. Frances herself suffered from depression throughout her life, and was devastated by the death of her oldest son in 1890. After divorcing, (which drew critisism in the press,) and marrying again, and divorcing again, Frances settled in Nassau County,New York, where she died in 1924.