What I've Been Up To: Little Felt People

I started this post back when Ivy was still home. That's why it is a little outdated. I held off posting until I finished what I had started, (which I am notorious for doing!) Last night I finished clothing on the last of the little felt people I had completed. Well, except for shoes. So. Here's the post.

Well, things continue to go wrong. Now I'm having problems with either my camera, or my memory card. I've taken pictures, including unboxing ones for a review, and they just aren't on the card. While I sort that out, and while I spend time watching TV with Ivy, I have been working on some other things. I've been wanting to try to make some dollhouse people, sort of in the style of Baps dolls. I started on some a week or so ago. They have wire armatures so they can bend, and are then covered with felt to pad them out, and are then sewn into their final felt 'skin'. The face is painted on, and clothes are added.  I made the first one without a template, just drawing a shape on the felt, then folding it in half to make sure the shape was symmetrical. I tried sewing the skin wrong side out, and then turning it and putting the felt covered armature inside, so the stitches didn't show. That proved to be hard to do, (Felt and felt tend to sort of 'velcro' together, making it hard to scoot the armature inside.) Also, it stretched the 'skin' so much that the stitches showed anyway.  It came out a little stubby, and I used brown felt. Ivy asked, "What are you making, a demon gingerbread man?" When I finished him, face painted and clothes on, she was still calling him the 'Demon Gingerbread Man'. At least I finished him! 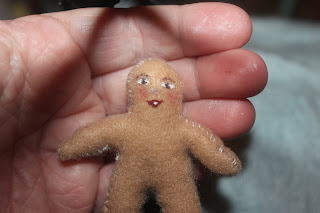 His stitches show badly, because I tried to sew him wrong side out and then turn the fabric right side out. He's so small that it strained the stitched turning him. It wouldn't be so bad if I had thread that matched his 'skin', but I didn't at the time. His arms are also a bit lumpy and mismatched.

After Ivy left for college I put hair  on him. I think he looks a lot less Gingerbread Manish now. 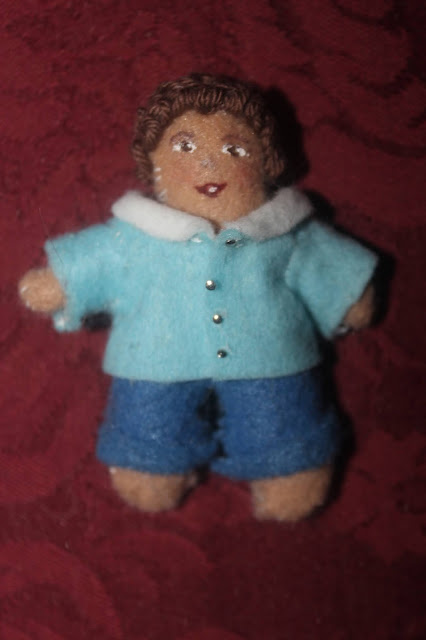 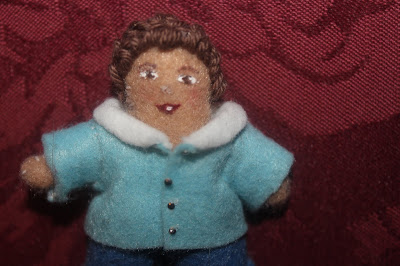 With his hair he's just under 3" tall.

Then I actually did a smart thing I seldom do, and that's make a template. I made another doll. I tried to make the legs and arms longer, and give it more of a neck. This turned out better, but the feet ended up turned out to the side. 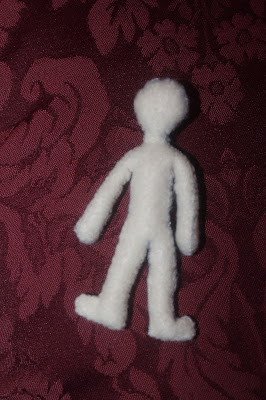 This time I sewed the 'skin' over the armature right side out. The stitches show, but it looks all right. I painted a face on it. I decided to make it into a girl. I was digging around for some thread I had that reminded me of the hair on Baps dolls. It's not quite as thin, but it works. I thought she'd look good in red, and pulled out some red and white gingham and made her a dress. Ivy said, "What are you making, Mary Ann?!" (As in "Gilligan's Island".) I saw the resemblance, but it wasn't intentional. I said no, but Ivy said, "I think you are." To throw off the Mary Ann vibe, and get her back to more of how I saw her, I made her a red cape. You'll see that in the last picture. 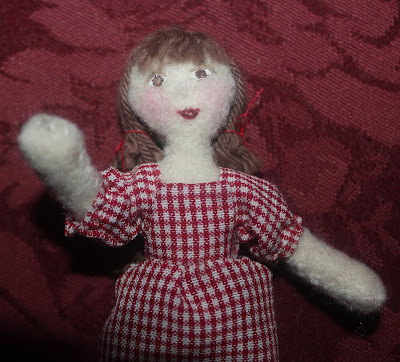 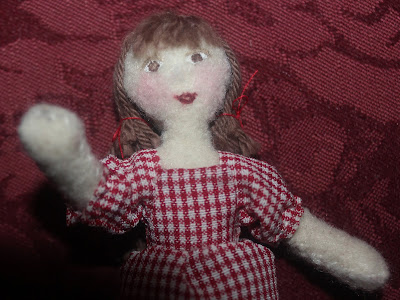 After I made 'Mary Ann' I worked on a new template. I changed it and changed it, and ended up cutting the pieces and taping them together to get it how I thought it should be. Then I made a doll from it and found that I had not taken the extra bit of felt needed between the legs to cover the edges of the legs. The felt has to be cut out with the figure sort of spread eagle, with the arms and legs sticking out. Otherwise there isn't enough felt to go all the way around the limbs.

I made more dolls. I ended up with these four dolls, the first one being 'Mary Ann'. 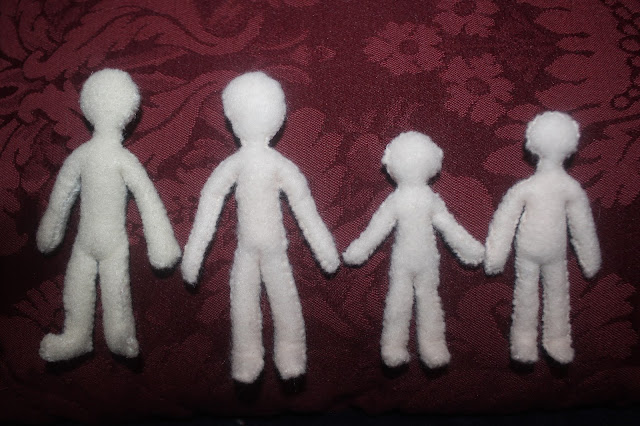 They were getting better, but that second one had a head like an alien. It would be even bigger once the hair was added. I finally decided I really didn't like the shape of the head. 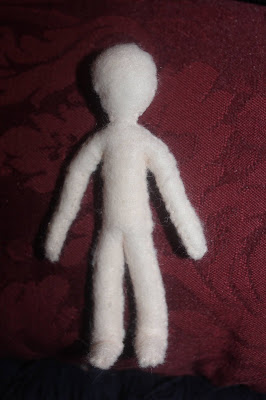 So I figured the back of the head would be hidden by hair, so I decided to make a cut in the back, and reshape the head by stitching around the top and pulling it into a smaller. rounder shape.

I had all these dolls and none of them were finished. Each one was a little better though. But finally I decided to stop making dolls and finish the ones I had first. I have a bad habit of making parts or even whole dolls, and putting off clothing them. I dread it so much because it's hard for me, and I'm not very good at it.

Once I had painted the face on it, I saw the alien head one as kind of a 1930's lady. I don't know why.  I had to figure out what to do about her hair. I had yellow thread like the brown thread I used on TDGBM, but I had to figure out her hair style. You know by now that I don't even do my own hair. I think she turned out pretty  good in spite of that. 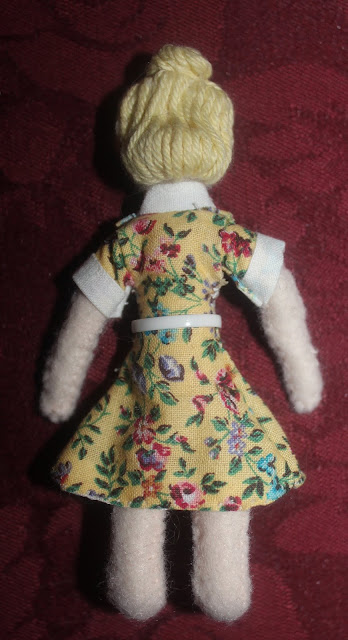 I had in mind that she should have a belt the shade of the dark maroon in the flowers on her dress. I was thinking of thin plastic cord. I knew there was something made of that stuff in this hose somewhere, but couldn't for the life of me think where it might be. I ended up searching all over for what I wanted, and ended p having to buy a whole pack of the stuff for just the inch or so I needed! In fact, I bought two packs. the first one was too wide and too stiff, so it was returned and I bought the second one. Neither one of them had the colour I wanted. They were mostly very basic colours, although the second one offered a little more variety. 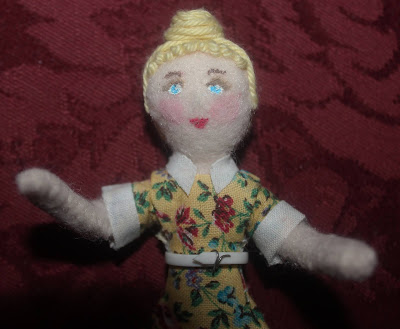 I meant to make  the two smaller dolls into a little girl, and an even littler boy. But when I started making the larger one, he began to look more like a boy to me. He's now the older brother I guess. 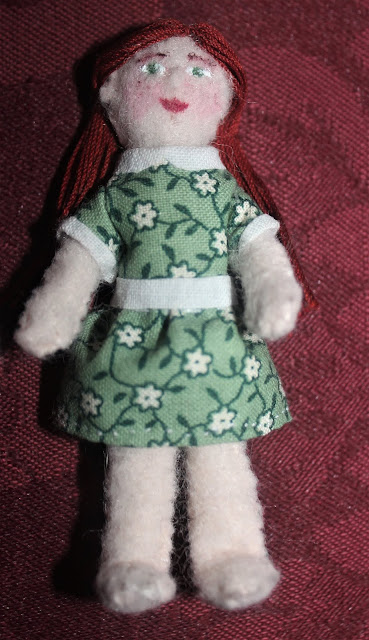 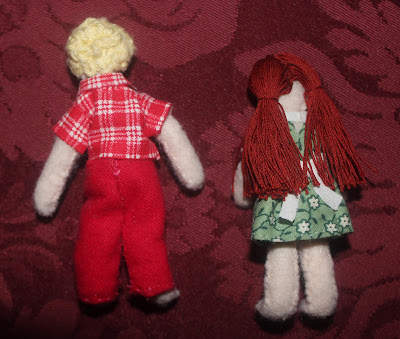 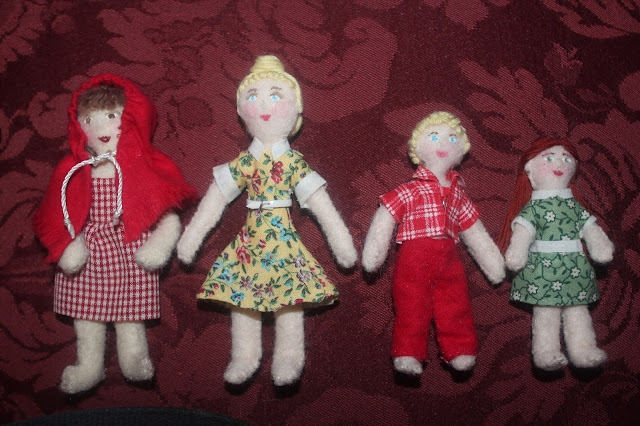 Of course they all need shoes now, so they aren't completely finished. I couldn't think what I should make shoes out of. They're so tiny that anything with much thickness to it would make the feet look huge. I finally thought of the thin,  modern felt I have. I think that might work. I also want to make a duffle coat for the boy from the blue flannel I bought when I got the red for his pants. One was going to be his shirt and one the pants, but then I decided to give him a plain cotton shirt.

So that's one of the tings I've been doing. I am way behind with things I want to post, so I WILL see you soon.