Doll Book of the Month Club: The Tub People by Pam Conrad

This month's Doll Book is "The Tub People", by Pam Conrad, with beautiful illustrations by Richard Egielski. 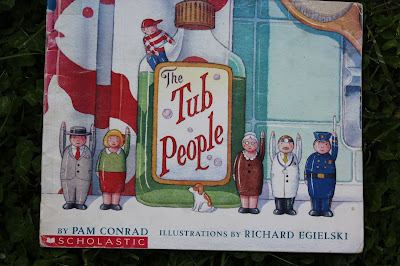 "The Tub People" is a short picture book, which can be read in a few minutes, but there's quite an adventure included. The book tells the story of a group of toys who live on the side of a bathtub. They include, "The father, the mother, the grandmother, the doctor, the policeman, the child, and the dog", and that's the order they always stand in.
I wondered why the child didn't stand with his parents. It should have been a tip off to the payoff of the story. I won't tell you the end of the story, but I will tell you that it's quite touching. Before the end comes the adventure. One evening, instead of being lined up along the tub as they usually are, the tub people are left floating in the water. Suddenly the water is drained from the tub, and the hapless Tub People go spinning toward the drain. The poor Tub Child disappears down the drain, and the Tub People are unable to save him. 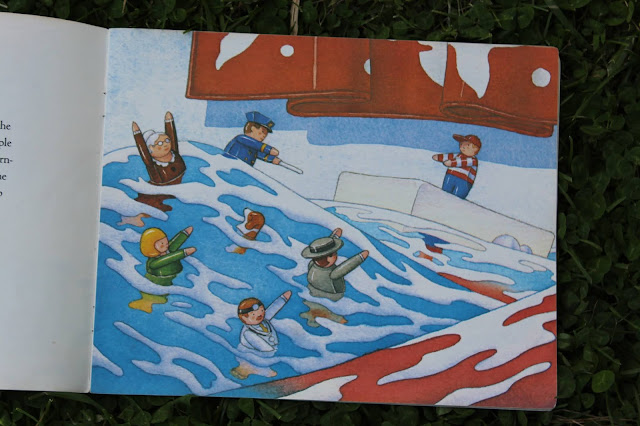 Will the Tub Child be rescued?
Is this too scary for a small child? I don't think they'll be scarred by it. It's a sweet, old fashioned story that is reminiscent of books like "The Doll People", (no relation.).

My kids liked it very much when they were small. Emma has a book called, "The  20th Century Children's Book Treasury", a huge book with many children's books included within one volume. "The Tub People" is included in that. 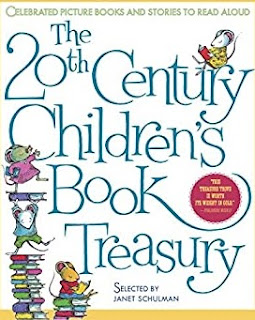 There have been two sequels, "The Tub Grandfather", and "The Tub People's Christmas".

Pam Conrad is also the author of  the 1986 ALA Best Children's Book of the Year and 1985 ALA Golden Kite Honor award winning children's novel "Prairie Songs", and the 1991 Edgar Allen Poe Best Juvenile Mystery award winner, "Stonewords". Richard Egielski is a Caldecott Medal winner and has illustrated many other children's books, including "Hey, Al", and the Tub People sequels, He has written and illustrated books including "Buz and Jazper", and "The Magic Balls", and "The Gingerbread Boy", both New York Times Best Illustrated Book award winners.

That's it for this month's book. See you soon.