Some Recent Goodwill Hauls and a Bad Back

My back was sore and stiff, I think, from the hours of driving to see Ivy Sunday night, sleeping in the car, (because I'm not staying in a hotel during Covid), and then hours of driving back home Monday. We went on Sunday because it's such a long drive and if we used up Monday driving we'd miss time with Ivy, who also had work to do on Monday, and it would be super late when we drove back home. I figured if we got there Sunday evening/night, we'd have all Monday free. It worked out well, except for sleeping in the car. Someone in Ivy's dorm had had Covid recently, so we probably wouldn't have been allowed to stay in her room if we'd have wanted to. I was a bit stumpy Tuesday, and then Ken and I had Fun Day on Wednesday, which involved more driving, and a nice car picnic at an arboretum again. That totally finished me off though. Wednesday night there was a lot of screaming going on during my shower. The neighbours probably thought I was having a visit from Norman Bates.

I spent yesterday resting, but should have rested laying down and letting my back relax. Instead, I sat up all day, and then there was more screaming at bathtime. I was hoping the warm water would help relax my back, but it just wasn't enough, I guess. I got smart and had Ken put some pressure on the painful places before we went to bed, and it did help unbelievably. I am still having pain, and I've been laying down and moving carefully when I do things. I think I'll probably be better tomorrow. Ken will be glad of that, because I haven't braved the stairs for a couple of days, so he's had to bring me food. (I didn't want to get stuck downstairs, unable to move. There's no working bathroom down there at the moment! (However, I did get a nice porcelain sink at a church sale this summer, and I've been waiting for the weather to cool down before braving renovating that tiny bathroom that only has a tiny window.)

Anyway, while I'm an invalid, I thought I'd go ahead and post some dolls that I found at a Goodwill a few weeks ago. There were several bags of dolls that day, and the prices were crazy. The bag I bought was only $1.99 though. It contained these.

There weren't any dolls I was really interested in, but I got really excited when I saw what the girl on the right was wearing.

If you read the blog regularly, you'll know that my dolls are notoriously low on shoes. I was excited about these shoes, because they are Betsy McCall shoes! I have two Betsys, the Tiny kind. Not the 11 1/2 inch one like I showed you the other day.

I actually have a white pair, and a black pair of Betsy shoes, but no red ones, and someday I hope to get that red plaid dress for her.

The dolls included a Native American Dress Me type girl. 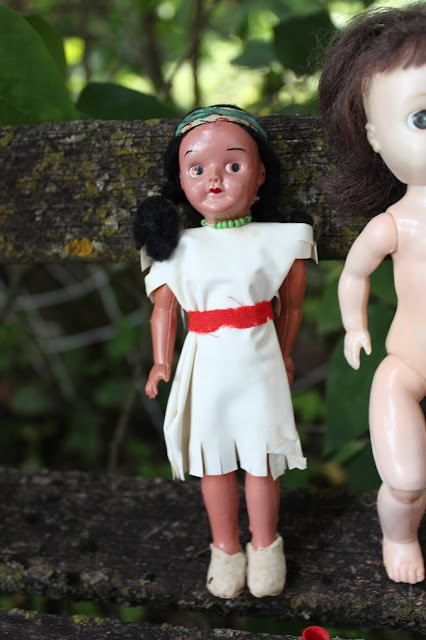 There was a Ginny wanna be. 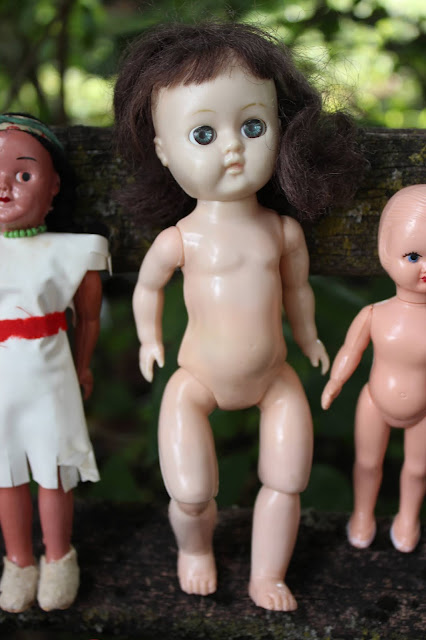 I'm pretty sure she's not a real Ginny. To tell you the truth, I got so excited about the shoes I forgot to look! She looks cheaper than a Ginny though. She's probably a Virga or something.

Then there is the girl who was wearing the red shoes. 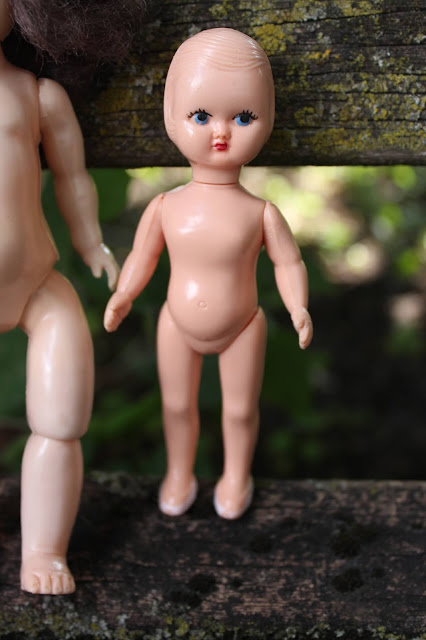 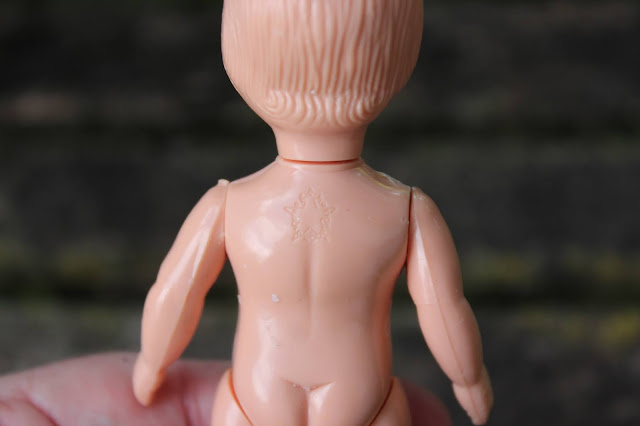 ... like the compo (possible) Alice I showed you recently. 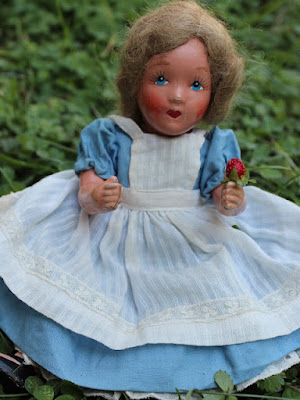 She has kind of an interesting face. 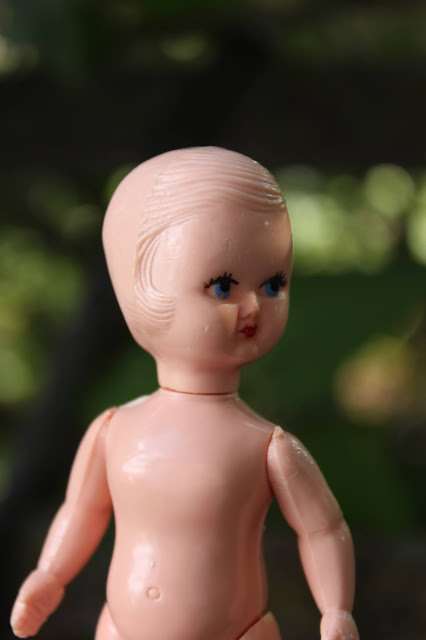 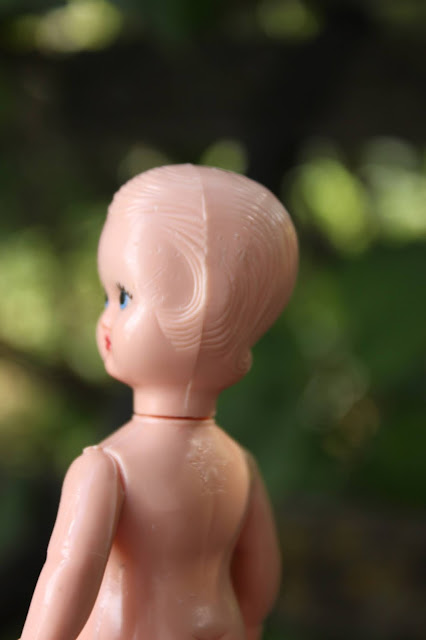 I suppose if she were wearing a cute dress she'd be kind of cute. Does anybody know who she is?

She has some personality. 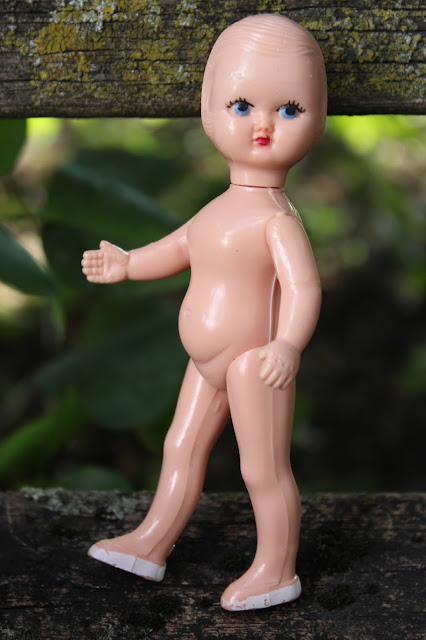 And a strange little belly scar. Maybe she's had a Caesarean. 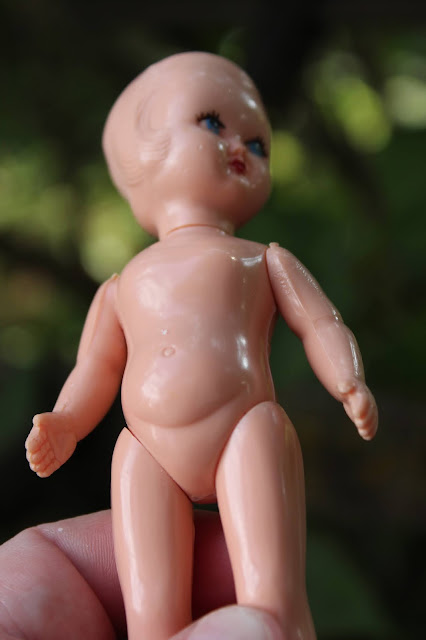 Aside from the shoes, there was also a brush. (Maybe it's a back scrubber brush?") 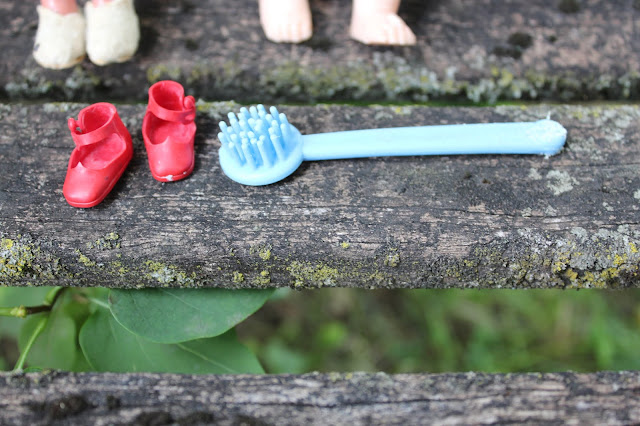 Does anybody recognize the brush? 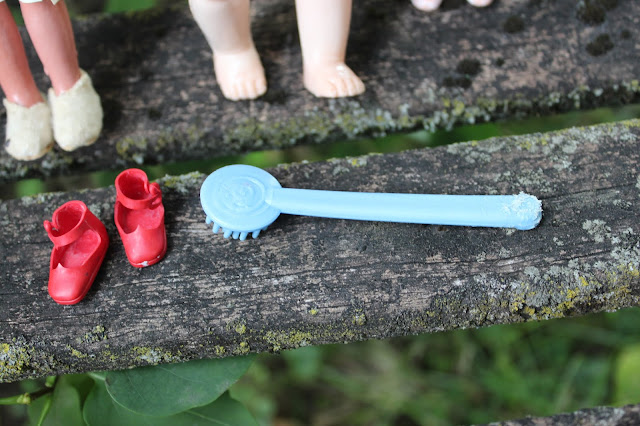 Another Goodwill recently yielded this chair and this mini American Girl doll. 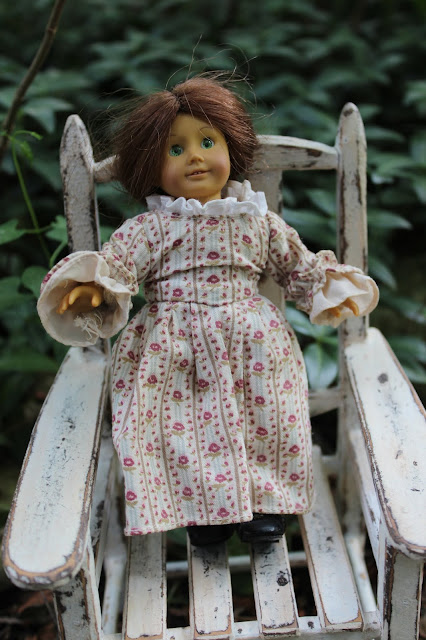 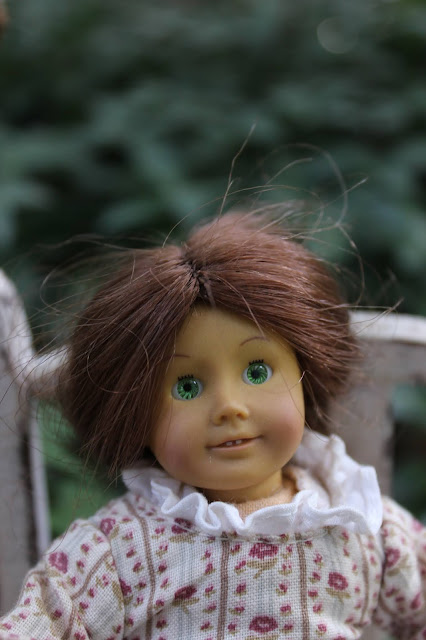 She doesn't smell like cigarettes, so I don't think it's nicotine. Has anybody had one of these dolls that yellowed.? Do they just do that?

So now I'm off to rest my poor back muscles, See you soon.